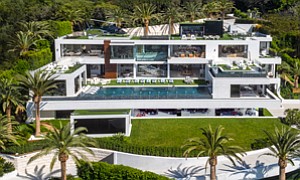 The helicopter, not so much.

Whether those amenities help developer Bruce Makowsky reach the $250 million asking price for his sprawling Bel Air spec house might not matter. Unlike the flightless helicopter he perched on the property, the whopping price tag has already served an important function: drawing international attention to the 12-bedroom, 21-bathroom manse.

If the home actually fetches its asking price, it would become the most expensive dwelling in the United States.

“There are probably only 3,000 people in the world who can afford the home,” Makowsky said. “The air is very thin up there.”

But will he get the asking price?

With very little in the way of comparison for homes at the highest end of the market, asking prices for these types of megamansions are part of an elaborate game of one-upmanship, with prices acting more as suggestions rather than valuations, local brokers said.

“It’s not uncommon for places in that pricing to go 30, 40, or 50 percent (less than) what you’re asking,” said Michael Nourmand, president of Nourmand & Associates. “I do think that part of the pricing strategy was to be the most expensive house, to call attention to it.”

“(Makowsky) staged it with a helicopter on a house,” said Sussman. “You can’t fly a helicopter in a residential neighborhood. It’s a reality television show, like everything else now.”

While it’s not uncommon for pricey homes to be sold in off-market transactions, agent Ann Dashiell of Beverly Hills’ Douglas Elliman said marketing splashy properties helps attract buyers from all over the world.

“It’s important to be able to reach qualified international buyers as far away as China,” said Dashiell, who was the listing agent for Holmby Hills’ Owlwood, an estate once owned by Cher and Sonny Bono that sold for $90 million in September after listing for $150 million.

Indeed, the listing for Makowsky’s home has generated attention not just across the United States, but in the United Kingdom, Australia, and elsewhere.

Makowsky said he was inspired to build the Bel Air Road mansion after spending time on $150 million to $300 million megayachts. He said he built the home for a billionaire looking for the level of service and overwhelming experience of enjoying life found on such crafts.

“Why would they have a toy more expensive than the home they live in?” said Makowsky, founder of Beverly Hills-based Bam Luxury Development Group.

He purchased the 924 Bel Air property from former football star and television personality Michael Strahan in 2013 for $11 million, according to property records. Strahan bought it in 2012 for $7.9 million.

In addition to not-altogether uncommon features such as a movie theater, bowling alley, bars, and fitness center, the 38,000-square foot house boasts a number of over-the-top extras. There is the $30 million car collection and more than 100 art pieces, including the inoperable helicopter on the rooftop. Also included in the purchase price is a full-time staff of seven, prepaid for two years.

Luxury general contractors estimate the cost of building a home such as Makowsky’s at between $1,100 to $1,400 a square foot – as much as $58 million in construction costs, not including the expenses of land, building permits, architecture, and engineering fees – not to mention all the other lavish perks.

“The main things that drive the cost are the finishes and all the bells and whistles,” said Barry Chase, chief executive of Century City’s CMF Homebuilders.

Makowsky made his money as chief executive of handbag company Kathy Van Zeeland, which he co-owned with his wife before selling it to Hong Kong-based consumer goods exporter Li & Fung Ltd. for a reported $330 million, a deal Makowsky said closed in 2010.

He moved to California from New York the next year to focus on developing homes for billionaires, and said he has done that with the last three mansions he built. Among them is the $70 million Beverly Hills property purchased by “Minecraft” creator Markus Persson in late 2014. The property had been listed for $85 million.

The Bel Air Road mansion is Makowsky’s ninth property in California; it took a crew of 300 four years to build. The megamansion burst onto the scene with a public listing in mid-January, though it was likely shopped around confidentially before that, said industry insiders.

Makowsky said the response so far has been pretty crazy. He has received calls from interested parties from around the world and also shown it to potential domestic buyers.

“I think it’s somebody who wants to have a trophy asset,” said Makowsky. “If you have a tremendous amount of money, you should try to enjoy every second of the day.”

“The phone’s ringing all hours of the night for my husband and I because people are calling from all over the world,” she said. “Everybody is vetted before they even talk to us.”

While the agents typically invest lavishly in marketing homes priced in the tens of millions of dollars, Williams said this one speaks for itself.

“We don’t really need anything behind this,” she said.

She said the commission agreed to with Makowsky is 4 percent, to be split between the buyer and selling agents – $5 million to each side should the buyer pay full price.

Makowsky said he considered those sales, all within three miles of his Bel Air Road home, when pricing the property.

“This whole area is incredibly hot right now,” he said.

Even if his house breaks the county price record, that prive might be short-lived.

Film producer and home developer Nile Niami is building a 100,000-square foot mansion in Bel Air that is expected to list at $500 million.

Pricing such trophy homes involve factors including square footage, how many acres the property sits on, location, historical value, uniqueness, whether a celebrity has lived there, and the sales price of comparable residences.

Yet all the luxury features and provenance that create media buzz don’t always translate into a sale.

Just ask Stacy Gottula, an agent with the Agency in Beverly Hills. She listed Beverly Hills’ opulent Palazzo di Amore property in 2014 with Joyce Rey while the pair worked at Coldwell Banker in Beverly Hills. The house, with a price tag of $195 million, was marketed as the most expensive home in the country.

But the price wound up being reduced to $149 million in order to entice an offer. Eventually, the seller took the home off the market and is leasing out the property.

Gottula is now among the many local agents trying to find a potential buyer for Makowsky’s mansion.

“Every agent in the city would love to sell that house,” she said. “I’m working very diligently to find that billionaire buyer.”