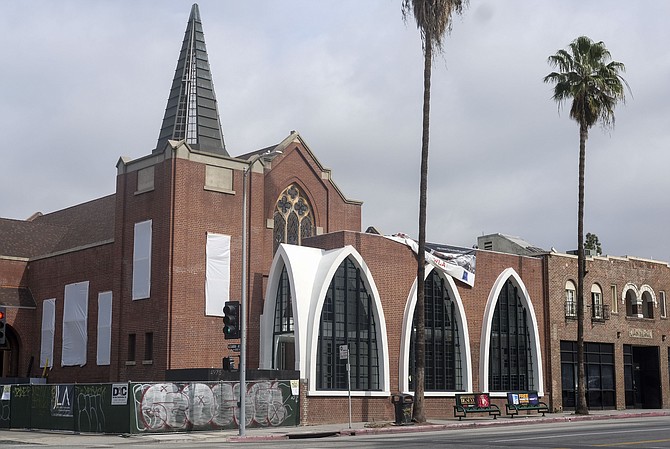 Developer Robert Herscu has a history of turning unusual buildings into office space, but his latest project, a 90-year-old East Hollywood church left in disrepair, presented unusual challenges both architectural and political.

“Most churches in the city are very old and have a large amount of deferred maintenance,” he said. “When we opened up the walls, we found many surprises.”

Beyond the structural issues, he also had to swallow the expense of rehabbing a voluminous space under 30-foot ceilings. Then there was the question of how to treat the stained glass, which is costly to maintain or replace, and also sparked a conflict with local preservationists.

The Central Los Angeles Planning Commission is scheduled to meet on Feb. 14 to decide whether Herscu can remove the stained-glass windows or whether he will have to preserve them in the building as demanded by some community members.

City planning officials had directed Herscu to retain the original windows, but he appealed the decision, claiming the religious imagery will make it difficult to lease the space.

Herscu already removed several windows under approval of the Department of Building and Safety, which later revoked that permit, saying it had been issued in error.

Despite the obstacles that can arise with church conversions, Herscu jumped at the rare opportunity because demand is high for unique office properties. His company, Century City’s HQ Creative Office, purchased the East Hollywood property in 2014 for $3.7 million from Full Grace Church, public records show.

“That’s the beauty of what we do,” Herscu said. “We’ve converted old prop warehouses, old gyms that had retractable roofs, churches, … buildings that have good and unique bones.”

Los Angeles is home to few other examples of repurposed civic and religious buildings.

Rick Caruso turned the former Masonic Temple in Glendale into high-end offices taken over by real estate brokerage CBRE. Some former churches were converted into event spaces, including Vibiana in downtown and the York Manor in Highland Park.

“It’s a nice attractive space, a lot of light, all the good things you’d want in a workspace,” he said.

But Los Angeles doesn’t have a huge supply.

Herscu’s church conversion, at 4975 Sunset Blvd., marks his 11th office project since founding HQ in 2011. He wouldn’t disclose the cost of the renovation.

Although he doesn’t have a particular background in development or architecture, he said he has an eye for turning unlikely structures into stylish office space.

He migrated into the office development world when he decided to sublease his own office space during the financial crisis and, to his surprise, hit on considerable demand.

“L.A. was such a hotbed for VC funding … and there were so many companies that didn’t want to be in office buildings,” he said. “When you come in wearing shorts and thongs, and you have a dog, you don’t want to get into an elevator with a bunch of suits.”

Now that Herscu is putting finishing touches on the Sunset property, he will begin shopping around the lease to tenants. While he doesn’t expect to snag a tech star such as Google Inc., he said he is pleased with the caliber of tenants that have flocked to past projects, including media company Mashable, ad agency Lunchbox, distributor Vertigo Films, and surfing apparel maker Outerknown.

He said he expects to find an occupant quickly, since the building will be ready for business from day one – though depending on this week’s decision, the tenant could have some divine company.