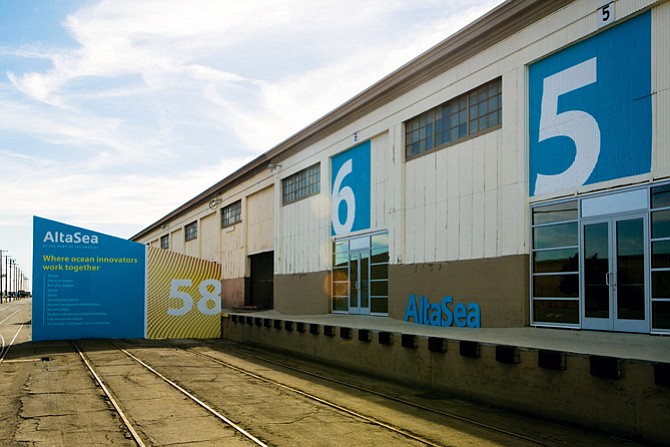 A different sort of construction project got underway last month at the Port of Los Angeles, where a marine research and innovation incubator is rising.

It’s smaller than a shipping terminal or bridge or other typically mammoth port project. The La Kretz Blue Economy Incubator will occupy 10,000-square-feet and operate as an innovation hub and incubator within the 35-acre Alta Sea campus on port property.

Alta Sea, a public-private partnership and business accelerator, formed in 2013 after the L.A City Council unanimously voted to approve a 50-year lease to transform a 100-year-old pier – City Dock No. 1 – into a marine research and innovation center.

“The La Kretz Blue Economy Incubator will find and support entrepreneurs developing aquaculture, undersea mapping and other businesses vital to understanding the largely unexplored frontier at our doorstep,” Krusoe said in a statement. “Blue Technology is part of the blue economy. It is robotics that will be built for researching and developing new ways to study the ocean, monitor energy, pipelines and exploration.”

Plans call for three to four such “ocean-focused businesses” to conduct research and development at any given time as residents of the incubator.

A company that was illegally dumping railcar parts into the ocean at the Port of Long Beach to conceal unnecessary repairs was ordered by a federal court last month to pay $25 million.

The dumping, as described in court documents filed with the U.S. District Court for the Central District of California, occurred in 2008 and 2009, when United Industries operated a repair facility at the port.

Employees told federal investigators, according to the court documents, that they were encouraged by some supervisors to make unneeded railcar repairs.

Port police received a tip about the improper dumping and conducted underwater dives that uncovered a “large debris field,” including railcar parts that did not show any signs of mechanical wear requiring replacement, a Department of Justice press release stated. The dumped parts included roof liners, brake shoes and railcar roller bearing adapters.

The department added that United’s illegal activities did not uncover any rail accidents attributable to the activity in question.

The company has more recently exited the intermodal railcar repair business, according to the department release.

A statement released by Caterpillar after news of the ruling that said its “rail division has taken corrective action against employees involved in this matter, enhanced its compliance program and made restitution to impacted customers.”

Unicolors brought the lawsuit against the Stockholm, Sweden-based fast-fashion retailer last April, claiming H&M had infringed on one of its fabric designs.

Unicolors creates purchases or otherwise obtains rights to graphic artwork for use on textiles, according to court documents filed in U.S. District Court for the Central District of California.

H&M did not say yet if it plans to appeal the decision.

Unicolors has won numerous lawsuits alleging patent infringement against retailers Kohl’s Corp., Nordstrom Inc., Urban Outfitters Inc. and Zara, among others. The company did not return calls for comment.