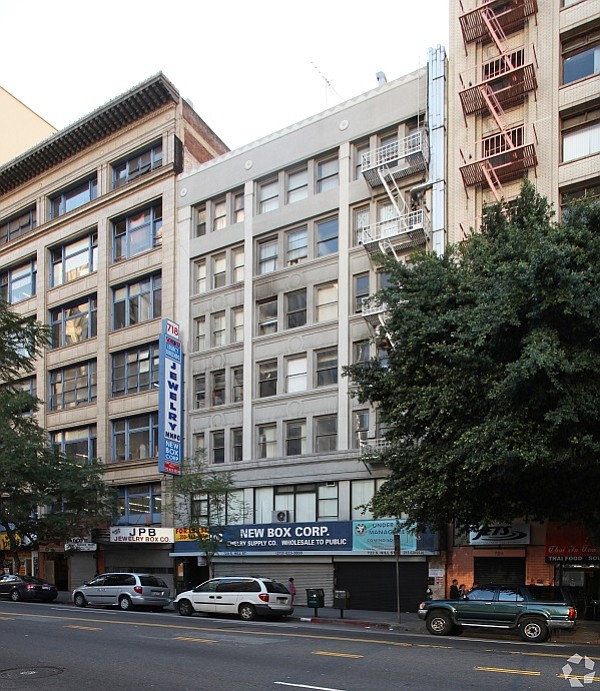 718 S. Hill is located in the Jewelry District in downtown Los Angeles

The $14 million sale of a century-old, seven-story office building in the Jewelry District to a developer with plans for offices, restaurants and an art gallery will continue the trend of change in downtown Los Angeles.

Bow West Capital, a Los Angeles-based redeveloper specializing in office and industrial redevelopment, bought 718 S. Hill St. from UrbanBlox. The seller paid $8.5 million for the 55,000-square-foot building in 2015, representing a 64 percent gain on its investment.

UrbanBlox renovated the upper office floors and converted the previous jeweler tenants’ leases to month-to-month leases once they expired, according to Cushman & Wakefield. UrbanBlox also had obtained a live entertainment and liquor license for the lower floors.

“It would have been hard (for UrbanBlox) to say no,” said Kelli Snyder, a senior associate at Cushman & Wakefield, which represented UrbanBlox in the sale. “They got an offer they really couldn’t refuse.”

The property had been on the market for about a year, said Mike Condon, Jr., executive managing director of Cushman & Wakefield. Condon, along with Brianna Demus and Arianna Nienow, also from Cushman & Wakefield, helped broker the deal. Bow West Capital was represented by Andrew Sinasohn and Jake Zacuto of the Zacuto Group.

Bow West Capital plans include turning the mezzanine into an art gallery and leasing the first-floor retail space to restaurants, according to President Sean Beddoe.

“This sale is also significant because 718 South Hill is another traditionally-located Jewelry District building that is going for conversion for something other than jewelry-type tenants,” Condon said in a statement. “As jewelry retail sales in the area decline, the neighborhood is proving ripe for redevelopment of these buildings into creative office, retail, boutique hotels, and multifamily.”

The area is seen as ripe for redevelopment with plans to bring back streetcar service as well as the revitalization of nearby neighborhoods such as Pershing Square.