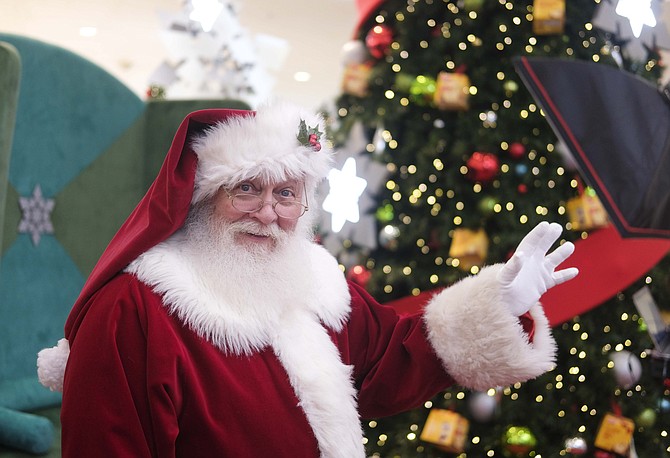 No, that’s not what the kids are asking for this year in their e-mails to Santa & Co. at the North Pole. That’s what today’s shopping malls, private clubs, hotels, street festivals, schools and corporate party planners are demanding when they book a Santa Claus to appear during the holiday season.

Offering a top-notch Santa experience is especially important for shopping centers, said Ronald Friedman, co-head of consumer products and retail at the Century City office of Marcum, a New York-based consultancy and accounting firm. Ecommerce might threaten the survival of malls throughout the year, Friedman said, but holiday time turns the tables.

“I think it’s good [when] a mall does anything to make it an entertainment center and attract people, whether it be Santas, elves, entertainment, music or choirs,” Friedman said. “I think the success of malls going forward is going to be creating an entertainment facility so that people will want to have fun there. That will determine the winners and losers.

“At this time of year, people are going to come to the malls, even if they are bad malls, during the holiday season, it’s just a fun time of year, Black Friday through Christmas,” he added. “I believe people want to go where it’s crowded, to have a good time.”

“We’re a luxury shopping center, so everything we do reflects that,” Downing said in an e-mail.

The center has two are available for visitation at the shopping center’s “North Pole” and “Santa’s Village” locations.

Traditional beards might still draw crowds, but the Santa’s workshops that decorate malls during the holiday season have gotten more modern in recent years.

“Santa is still a big draw for families every holiday season,” said Stephanie Cegielski, vice president of public relations for the International Council of Shopping Centers, based in New York City, in an e-mail. “The change we are seeing is that Santa is going more high-tech,”

Cegielski said the high-tech trend included attractions such as the interactive Santa’s Flight Academy available at a number of malls across the country, where children learn how to pilot Santa’s sleigh, don a virtual flight suit, and get a commemorative flight badge.

Cegielski said some shopping centers have borrowed from the restaurant industry, providing pagers that will let guests know when Santa is ready to see them so they don’t have to wait in line.

Representatives of the popular Grove retail center in the Fairfax district declined to comment on the center’s Santa experience, but its website said reservations to meet with Kris Kringle are completely booked through Dec. 24, although walk-up guests remain welcome. The site boasts photo packages ranging from $30 to a $70 premium package that includes a flash drive and video.

On the flip side, the newly remodeled Westfield Century City mall has added high-end services including private suite concierge-facilitated shopping and special services catering to entertainment industry costume designers, but reports that it has not offered a Santa photo experience for several years.

The changes in the mall experience haven’t hurt those who supply the talent, according to Charin.

She said her company has grown by some 86 percent since she launched it in 1985 from her Studio City apartment with a $1,000 loan from her father. She started as the company’s only entertainer, Robin the Clown, but it didn’t take long for her to discover the business potential of The Claus.

“I didn’t know anything (much) about Christmas because I’m Jewish – not religious, but Jewish,” she said. “I didn’t know people actually hired Santas to come to their country club, or to their house.

“I went, ching ching ching!” Charin added, performing a convincing imitation of a cash register. “I said, oh, I can do this.”

R.T. Clown has booked approximately 500 performers for more than 35,000 events over the years, with plenty of Santas in the mix. Charin said the company has not yet cracked $1 million in annual revenue, but the business is still growing.

She figures her husband Mark Ferris, who often portrays Santa, has hefted about 7,000 pounds worth of children onto his lap.

Sporting a real beard may be worth the risk of getting one’s facial hair tugged by “screamers,” those tots aged 12 to 18 months whom Charin identifies as the most likely to suffer a holiday meltdown on Santa’s lap. While fees vary widely, Charin said a fake beard Santa might command between $125 and $175 for the first hour, pro-rated for subsequent hours. A real beard could receive an average minimum of $275 for the first hour.

Charin cautions that aspiring Santas should not use the hourly figure to calculate potential earnings for an eight-hour workday. Santas, especially real beards, are only booked for a few hours at a time, generally. The costumes are hot, and authentic white beards generally belong to senior citizens.

“We’ve rented both ‘real beard’ and fake beard Santas, but we’ve noticed that the Santas with real beards tend to go over a little bit better with the 30 to 40 children that attend the party,” Butler said.