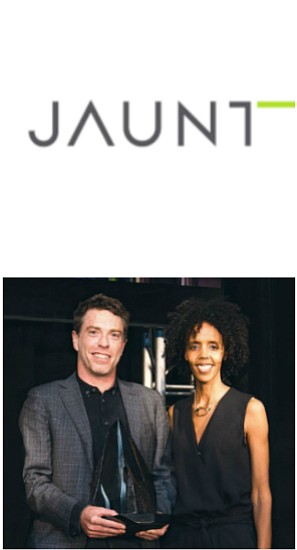 Having developed and distributed immersive cinematic realities in order to pioneer the evolution of new media, Jaunt is a key supporter of the category as a whole. With immersive cinematic realities as an emerging industry and one of the fastest growing sectors of new media, Jaunt has emerged as a willing collaborative force as well as a leader in the field. Though the industry is small, Jaunt has made major strides to make itself known as a brand that is looking to provide opportunities for others to succeed.

Jaunt’s proprietary computational photography algorithms transform the recorded video data using sophisticated geometric calibration, color adjustment, and image processing. The result sets a new standard for immersive content quality. Jaunt’s cross-platform viewer renders content for the Oculus Rift and other devices. It uses VR head tracking to allow the user to see in any direction, and binaural mixing, which creates an audio experience that is just as immersive as the visual.

Jaunt is also the creative force behind Kaleidoscope, the organization that funds and amplifies content creators in the virtual reality medium. Last year, Jaunt developed, with USC’s esteemed School of Cinematic Arts, the Jaunt Cinematic Virtual Reality Lab, which allows students to learn and build the future of new media. Jaunt is mentoring students, providing them tools to support their creative process, and researching new ways content will thrive in the future.