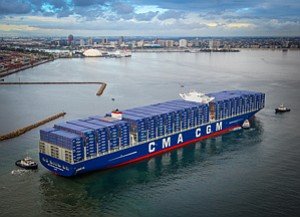 The Port of Long Beach reduced its air pollution levels in 2016 by a record amount as it moves toward a goal of zero emissions, according to a study released this week.

The air emissions report concluded that the port saw an 88 percent decline in diesel particulates last year compared to 2005 while other pollution levels also declined, mostly due to the port’s green initiatives. The study was conducted by an independent agency for the port and was reviewed by government entities including the Environmental Protection Agency.

Both Long Beach and the Port of Los Angeles have worked to reduce pollution from port-related sources such as shipping lines, trucks, cargo equipment, harbor crafts and rail through its Clean Air Action Plan, which went into effect in 2006. However, some of those moves have caused concern among the trucking and logistics industries about costs and other problems associated with the new, cleaner-fuel vehicles they were required to use.

“Our pollution-reduction strategies begin before a vessel enters the harbor and continue after cargo leaves on a truck or locomotive,” Harbor Commission President Lou Anne Bynum said in a statement. “This is a model we worked hard to achieve at the Port of Long Beach, and it’s one we’ll continue to improve until we reach zero emissions.”

Both ports plan to have zero-emissions cargo handling equipment by 2030 and a zero-emissions trucking fleet by 2035. The next round of CAAP updates is slated for this fall.