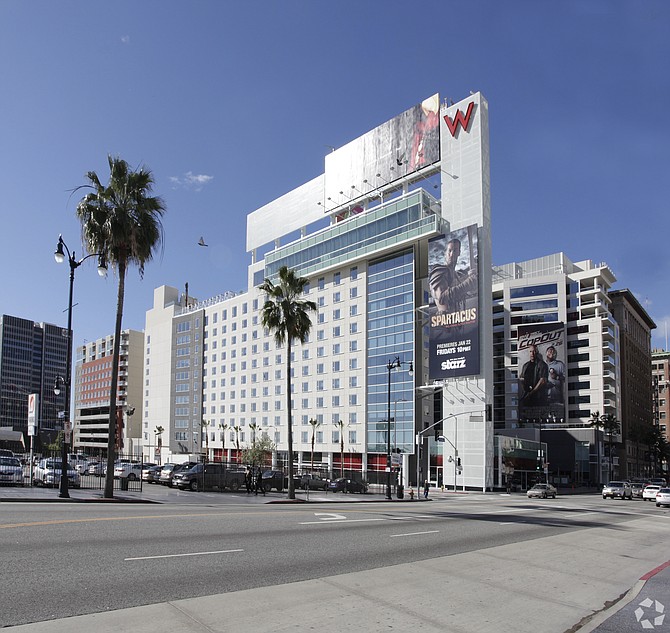 Room for More: The $219 million acquisition of the W Hollywood by a partnership duo was the most expensive hotel deal in California in the first half of this year.

Expectations of a slowdown in the market for hotels in the L.A. area after a hot 2016 turned out to be off the mark as a number of factors kept the streak going in the first half of this year.

The total dollars behind the deals jumped 46.1 percent to $780 million, the report says.

The local market took the distinction of being home to the most expensive deal statewide in the first half of the year, thanks to the sale of the 305-room W Hollywood, which fetched $219 million from a partnership between Norwalk, Conn.-based HEI Hotels & Resorts and Gatehouse Capital of Dallas. The seller was Bethesda, Md.-based Host Hotels & Resorts. The W deal came to about $718,000 a room – short of the statewide crown by that measure, which went to the smaller Hotel Yountville in Napa Valley at $1.2 million a room.

The pricey deal for the W helps explain the hike in the average price per room, while the dip in the median indicates a brisk pace from the middle market and downward.

“We had more lower-priced, lesser-quality deals that closed in the first half,” said Alan Reay, president of Irvine-based Atlas. “We had smaller, independent, nonbranded hotels trade hands.”

Reay cautioned that it’s hard to draw conclusions on a six-month basis, though he conceded Atlas was among the market trackers that expected a slowdown to set in on hotel sales this year.

Instead, he said, the market has remained attractive due to continued demand among buyers from China, available financing, lower returns on apartments and opportunism among many mom-and-pop operators.

“I think a lot of smaller players who made it through the recession are now seeing prices being offered that have them thinking that now is a great time to get out,” Reay said.

The smaller hotels that have helped fuel the market so far this year have tended to be in suburban areas, often in cities in the first ring out from Los Angeles. Smaller hotels – or motels – in areas such as downtown or the Westside are often torn down, with the land put to other uses. Similar establishments in the South Bay or San Gabriel Valley tend to remain in operation.

“Small hotels do a lot of cash business and that attracts a different kind of buyer,” Reay said.

Submarkets in the central city have added significant numbers of new hotels over the first half of the year, according to an earlier report on development by Altas.

Downtown’s Financial District alone accounted for nearly one-third of the number of hotel rooms added to the industry’s inventory statewide in the first half of the year, thanks to three new establishments.

The InterContinental Hotel led all projects in the state when its 889 rooms debuted with the opening last month of the Wilshire Grand Center. The hotel partially occupies the 73-story tower, the tallest building west of the Mississippi River, at Wilshire Boulevard and Figueroa Street. The Hotel Indigo added 350 rooms a few blocks away on Ninth and Francisco streets, and the boutique Freehand Los Angeles accounted for 226 rooms at Eighth and Olive streets.