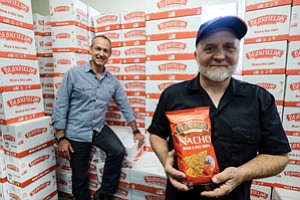 The acquisition last month of a 51 percent stake in West L.A. bean and rice chip maker Beanfields by venture capital firm Powerplant Ventures and a consortium of investors led by media investor Bruce Friedman, had a unique component baked in.

Downtown gang member rehabilitation nonprofit Homeboy Industries is getting an equity stake of 5 percent to 10 percent in the company and a payout of 1 percent of Beanfield’s revenue on an ongoing basis, said Mark Rampolla, a Powerplant co-founder and partner.

The arrangement was brokered by Rampolla, who has worked with Homeboy for three years. The unusual move reflects a goal he had with Reed Glidden, Beanfields’ co-founder and former chief executive, to make both healthy food and a difference in society.

“Reed and I share a commitment and vision of not only better-for-you food but of finding creative ways to use business as a force for good,” Rampolla said.

Powerplant, based in Manhattan Beach, took a 20 percent stake in Beanfields in the deal; Friedman’s group took 31 percent of the company. Homeboy’s piece of the company comes from Rampolla, who donated shares he acquired personally in an earlier funding round.

Glidden, 64, and his family retained a more than 25 percent stake, with the balance held by employees and angel investors.

Scott Lenet, co-founder and president of Touchdown Ventures, saw the transaction as part of a larger movement among businesses, especially those that sell consumer products, to have a positive social impact. An example is Toms Shoes of Playa Vista, which donates a pair of shoes for every pair a customer buys. Bain Capital acquired a 50 percent stake in Toms in 2014.

While rooted in altruism, the practice has become popular with millennial consumers in particular, said Lenet.

“It’s definitely smart business to take the long-term perspective on the planet and those who live on it,” he said.

The Beanfields transaction is the first Lenet has seen where the social component was part of the deal itself, however.

“We believe it’s a good way to do business, but it also helps grow the brand,” he said. “Homeboy has a big following. It’s a win-win for both sides.”

Glidden founded Choice Sales & Marketing Inc., an Anaheim company that helps get natural and organic food products into the hands of distributors and stores.

The idea for the bean and rice chip that was the genesis of Beanfields came from Glidden’s wife, Liza Braude-Glidden, who was looking for a snack for her vegan husband, who had pulled back from day-to-day operations at Choice but still holds the title of chief executive.

He knew how high the bar was for healthy snack food.

“I’ve been in the industry a long time, tasted a lot of stuff,” said Glidden. “I knew the taste had to be as good or better than what’s out there. It doesn’t happen very often.”

He said that after tasting the first chip, he knew the item was a potential hit. Though Glidden never thought the product would sell more than 200 miles from where it was made, he launched the Brentwood business with the help of his wife and brother, Roy Glidden. The couple used their own money to start the company, which was run out of their house until last month.

Despite believing in the product, Glidden didn’t expect the company to grow so quickly and thought it would just be sold locally.

But Rampolla, who had started investing in early stage healthy food companies after selling his Zico Coconut Water beverage line to Coca-Cola Co. in 2013, was introduced to the vegan chips, which are free of gluten and genetically modified organisms, by a New York distributor.

After hitting it off with Glidden, Rampolla invested in Beanfields around 2014.

The chips, which come in seven varieties, are available at Whole Foods nationally and other major grocery stores in Southern California. Their suggested retail price ranges from $2.99 to $3.99.

The goal of Powerplant, which includes money from its co-founders, private investors, and family offices, is to make money while doing good and taking care of the Earth.

Glidden, who never expected the chips to be a hit, was now ready to step away from this venture as well.

He interviewed multiple candidates but Powerplant was the perfect fit in terms of shared values and experience, he said.

“I was so lucky to find these guys,” Glidden said. “They know how to scale a company. I’m a guy who knows how to start a company. It’s never been my intention to (scale); I don’t have the personality type.”

Glidden stepped down as chief executive and now serves as a board member and co-chairman with Rampolla.

Beanfields won’t have a chief executive, but rather will have a two-person executive team consisting of its chief operating and chief financial officers, Rampolla said.

The company has about 13 employees, Glidden said.

Rampolla has been working on and off with downtown’s Homeboy, which provides jobs and support services to former gang members who want to transition back into society, on ways to generate sustainable revenue.

Grown out of an organization founded by Father Gregory Boyle in 1988, the nonprofit has long thought outside the box in terms of raising funds. It opened Homeboy Bakery, its first social enterprise, in 1992. In February, the group acquired an electronic recycling company with the help of donors that it runs as a for-profit business now named Homeboy Recycling.

Despite such enterprises, the charity runs at a net operating loss since its businesses employ two to three times more employees than a for-profit business would, according to Chief Executive Tom Vozzo. Homeboy has a $19 million budget, and the money from Beanfields will allow it to hire more people, he said.

“So many people in (Los Angeles County), former felons, need our help,” Vozzo said. “Each day we turn away a lot of folks. With more money coming in, we’ll bring more people in.”

The social impact angle of the deal has attracted interest from multibillion-dollar family offices, Rampolla said, and so he is planning on publishing a breakdown of the deal for other investors to use in the future.