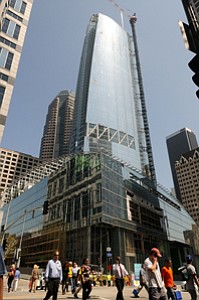 The 73-story Wilshire Grand Center, the tallest tower in the West, is close to signing its first major office tenant.

The Southern California Association of Governments is slated to sign a lease for two floors, or roughly 44,000 square feet, in the building being developed by Korean Air Lines Co. Ltd., according to two sources familiar with the deal.

It would join Korean Air and the building’s leasing agency, Cushman & Wakefield, which are both slated to take space.

Steve Marcussen of Cushman said Korean Air is expected to take one floor, as the Business Journal reported in September, and that Cushman will also relocate its L.A. offices there from the Figueroa at Wilshire building across the street. The Wilshire Grand is slated to open to office tenants this summer, Marcussen said.

SCAG spokesman Jeff Liu said last week he couldn’t comment on that organization’s lease until the deal was finalized.

Marcussen said deals with several companies were being negotiated, but wouldn’t say whether SCAG was among of them.

The Wilshire Grand has about 353,000 square feet of office space across 18 floors, as well as a multilevel parking garage and 38 floors of hotel space operated by InterContinental Hotels & Resorts slated to open this summer.

One of the sources familiar with the SCAG lease said the landlord offered concessions, which is typical among new buildings seeking tenant activity. The source also said the term of the association’s lease would be for about 15 years.

The price tag was $81 million, according to a source familiar with the deal.

The property, called Los Angeles Corporate Center, spans nearly 400,000 square feet across four buildings and went for roughly $205 a square foot in the transaction, which closed March 31. The seller was Blackstone Group through its subsidiary Equity Office Properties Trust.

“Its proximity to downtown is a big demand driver for government agencies, nonprofits, and other tenants that need to be within a certain radius of downtown,” Fulp said.

The buildings are 95 percent leased, with tenants including the state of California, Los Angeles County, the State Compensation Insurance Fund, SynerMed, and AT&T Inc. The diverse mix will help Omninet to accommodate tenants as they shrink or expand, said Fulp, who also noted that Omninet was uniquely qualified to pick up the site.

“They’re a sophisticated investor in that they’re a strong family office,” he said. “They are smart enough to evaluate and assess risk and then price it.”

The site likely has not been marketed as an individual asset since it was bought by Arden Realty Inc. in 1996 for $41 million, or about $132 a square foot. It then traded hands through company acquisitions and portfolio sales.

“It was an opportunity that came along that was a good fit,” said Hilton Davis, Diet-to-Go’s chief executive. “To duplicate that facility would be in the neighborhood of $1.5 million.”

He would not disclose terms of the Freshology acquisition, but said the Burbank lease is good for seven years with options. First-quarter data from JLL put average asking rents for the industrial sector of north Los Angeles at 77 cents a square foot.