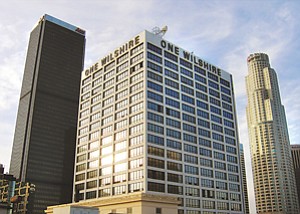 Good Optics: Wilcon’s office is in One Wilshire, a major fiber-optic network hub.

“The acquisition of Wilcon provides us an extensive set of dense metro fiber assets that will enable us to continue to deliver fiber-fed small cell solutions for our wireless customers in our fastest growing and most active market,” Jay Brown, Crown Castle’s chief executive, said in a statement.

The telecommunications industry has steadily consolidated in recent years as larger firms have gobbled up smaller, regional companies.

“There has definitely been significant consolidation going back almost a decade,” said Wilcon Chief Executive Jon DeLuca, adding: “We are probably in the last quarter of that game.”

Anticipating the pace of industry consolidation to slow in the years to come, DeLuca said the time was right to sell.

“There have been other acquisitions in the communication-infrastructure space at very high valuations,” he said. “As a private-equity owned company, we knew there would be a time that we had to bring a return to our investors. Given the valuations in the market, it seemed like a good opportunity.”

Pamlico Capital of Charlotte, N.C., holds a majority stake in Wilcon, which has its headquarters at the One Wilshire office building, a major fiber-optic network hub for the region.

The deal is expected to close in the third quarter.

While venture capital investment in L.A. startups rose slightly in the first quarter of 2017, seed-stage investments went in the other direction.

It isn’t clear what’s causing the conflicting funding trends, but there could be several possible explanations, said Amplify’s Connor Sundberg, who helped put the report together.

“It could have just been people taking a turn to quality over quantity,” he said. Or, “you have all these deals making these extremely high valuations, but (venture capitalists) haven’t exited, so these companies have money tied up in them.”

A slowdown in early-stage funding could shrink the pipeline for later-stage funding opportunities down the line, but the problem would likely be short-lived, said Eric Pakravan, senior associate with Amplify.LA.

“In the last four months or so, you’ve seen a number of new $25 million to $75 million seed funds that could lead rounds,” he said. “Once those guys actually start writing checks, we should see seed funds rise.”

The time seed investors set aside to raise investment funds also could have taken away from their time financing startups, contributing to the slowdown, Pakravan said.

“Raising a fund is a lot of work, so it tends to tie things up for a bit,” he said.

The second class to graduate from the three-month Cedars-Sinai Accelerator program showed off their technologies at a demo day at the Skirball Cultural Center on April 19. Technology came from seven medical startups, including two local startups: Cerebro Solutions of Playa Vista, an online marketplace for nurses working as independent contractors, and Frame Health of West Los Angeles, a developer of software that analyzes patient personality.

The medical startups will now go out to raise additional funds and acquire customers using their experience from the program, said Omkar Kulkarni, director of the Cedars-Sinai Accelerator.

This second class was particularly well-equipped to graduate because Cedars-Sinai made a few tweaks to how it ran its program, including tailoring the course more to the needs of individual companies, he said.

“We identified early on what each company was trying to accomplish during the course of the accelerator,” Kulkarni said, noting that the program asked: “Who are the right people at Cedars-Sinai for them to engage with?”

“I think we’ve hit our groove,” he said.