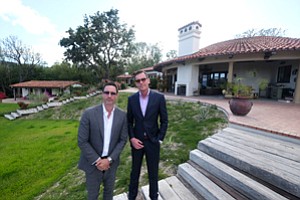 With so many mansions in Los Angeles County, calling attention to a home’s spacious grounds or sweeping views might not be enough.

That’s why you’ll find dancers waltzing through a seven-bedroom, 10-bathroom estate in Encino in a marketing video set to the catchy tunes of the Oscar-winning film “La La Land.”

But making such an intricate production can be expensive. The eight-minute video cost more than $5,000 to produce and has created a buzz among fellow agents and the media. It has also piqued the interest of six to eight prospective buyers for the $8.5 million property so far, said listing agent Horacio LeDon, president of new development at Partners Trust of Beverly Hills, who paid for the video out of his own pocket.

“It’s a calculated gamble,” said LeDon about footing the bill for marketing videos.

More real estate agents are opting to take that risk, and they are increasingly drawing inspiration from Hollywood in their attempt to sell luxury properties. Rather than staging the Encino home with high-end housewares, LeDon and fellow listing agent Mark Rutstein created an original storyline with a unique element aimed at helping the video go viral.

The production, titled “Oak View Land” after the home’s Oak View Drive address, had about 2,300 views on Vimeo as of last week.

“I didn’t want to pigeonhole the property into this fictitious tech billionaire, 24-hour party house,” said LeDon. “That’s where the majority of that video product has been geared to.”

Mercer Vine, a brokerage headquartered in L.A.’s Fairfax District, was also striving for something a bit different in its video for a home at 1420 Laurel Way in Beverly Hills that’s listed for nearly $14 million. The video features a couple of dancers clad in black moving throughout the home and is set to a pulsing rhythm.

Emmanuelle Pickett, the brokerage’s creative director, said her goal was to create a mood rather than define the property through a storyline. The video is the agency’s most expensive to date, and it is planning more in the future. Pickett declined to say how much the company spent on the video.

Though it might seem counterintuitive, the product isn’t necessarily targeted toward people actively searching for a home, said Adam Rosenfeld, a founding partner of Mercer Vine.

“People on the market are going to be looking at Zillow, the MLS, Trulia,” he said. “These videos are good for social media outlets, press outlets, where it starts to reach a much vaster audience – people who aren’t necessarily on the hunt, but they might know somebody who is interested.”

Some filmmakers are also using the growing market for real estate videos to launch their careers. Andrii Aksonov founded Dream Real Estate Media, which he has since rebranded as Aksonov Film, when he moved to Los Angeles from Ukraine two years ago. Many of his clients were agents and brokerages, starting with Josh and Matt Altman of Douglas Elliman in Beverly Hills, the stars of Bravo’s “Million Dollar Listing.” Now half of Aksonov’s business comes from shooting real estate videos, he said.

Aksonov charges around $1,000 for a basic video that shows off the home. He also offers a $5,000 package with actors and a storyline, though he said most clients still gravitate toward the basic package.

Koreatown-based Rafiki Creative is another production company behind many buzzed-about luxury real estate videos, including one about two kids who feign illness to stay home from school in order to enjoy a home’s high-end amenities, and another about a dog that inherits a multimillion-dollar home.

Alex Odesmith, creative director at Rafiki, said such productions cost between $15,000 and $50,000 and comprise a third to half of the company’s business by volume.

Rafiki was hired by agent Ben Bacal of Beverly Hills-based Rodeo Realty to produce many of the company’s narrative videos. Bacal said he typically reserves such high-production value projects for ultraluxury properties in the tens of millions of dollars.

But most agents don’t have the marketing budgets to shoot such lavish videos nor are they representing multimillion-dollar homes where it makes economic sense to spend that kind of money.

Bacal has been developing a venture since last year geared toward this market called Roofshoot, which he said would launch in June. It will be a free app with a tiered subscription model that provides templates to agents for creating videos about properties and themselves.

Bacal said he has invested about $2.5 million in the company and is in the process of raising a $2.5 Series A funding round.

“I saw if I just shot a video on my iPhone and edited it on iMovie and put some music on it … I got just as many views” compared with his more expensive videos, he said. “That was the vision for Roofshoot.”