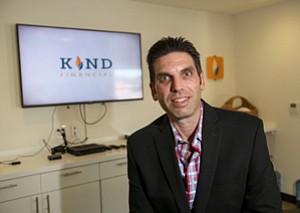 Cannabis companies in California don’t know yet whether they will be obligated to use track-and-trace software if recreational marijuana is legalized with passage of Proposition 64 in November, but one Hollywood firm is predicting a budding business opportunity.

Kind Financial is launching a more comprehensive version of its Agrisoft software product this fall and has already signed up 65 clients who will begin using its program next month. Founder David Dinenberg, 44, said the company shifted its strategy last year after acquiring cloud software firm Agrisoft Development Group, focusing less on offering financial services and more on providing compliance technology for cannabis companies and government regulators.

“I would like to think that we evolved in a great way,” Dinenberg said. “The pain points in this industry have not changed. We have found a better, quicker, more suitable, and long-lasting solution for today’s climate and for the future.”

Software such as Kind’s Agrisoft helps cannabis companies remain compliant with state and local laws while also helping them manage and track inventory from seed to sale. The industry has a number of established players, including BioTrackTHC of Fort Lauderdale, Fla., and Denver-based MJ Freeway, but Kind is hoping its recent partnership with Microsoft Corp. will give it an edge as even more companies enter the space looking to cash in on the L.A. market.

“A lot of them are saying, ‘Hey, we want to do this, but the state hasn’t mandated it yet. We’ll let you know when we’re ready,’” Afaneh said.

Avis Bulbulyan, founder and chief executive of Burbank cannabis consulting and management firm Siva Enterprises Inc., said it’s only a matter of time before track-and-trace software becomes the industry standard. Proposition 64 would mandate companies to use it in two years.

“If you’re looking to be in the cannabis space long term, you need to move compliance up to the top of your list of priorities,” Bulbulyan said. “Track-and-trace, besides being a requirement come the state level in 2018, it’s just good business practice.”

Dinenberg, a former commercial real estate broker and developer in Philadelphia, launched Kind after moving to Los Angeles in 2013 and raised an undisclosed seed funding round in June 2014. A subsequent $2 million round closed in February. One of Kind’s biggest investors is Lindy Snider, a longtime advocate for the legalization of marijuana and daughter of former Philadelphia Flyers owner Ed Snider, who died earlier this year.

Headquartered in Hollywood, the company has a staff of 21 and expects that number to double next year. It claims to have about 140 clients, including its new contracts, in 17 states. Kind’s original business model involved offering banking solutions to cannabis companies through a smartphone app called Kind Pay. The app, which would allow dispensaries to accept electronic payments from customers and suppliers through a debit account, is still in development.

But Kind sniffed out a new opportunity in June of last year, acquiring Kansas City, Mo.-based Agrisoft for an undisclosed sum.

“As I did my research, I began to understand the foundation of any heavily regulated industry – pharmaceuticals, tobacco, alcohol, firearms – is a compliance component,” Dinenberg said. “The foundation of (the cannabis) industry is going to rely on strict compliance and regulatory software. That was the real bell in my head that went off.”

Kind plans to introduce a more comprehensive version of Agrisoft to customers in the fourth quarter that will include new features such as customer relationship management software, an accounting package, and business analytics capability. A monthly subscription starts at $199, said Dinenberg.

While Dinenberg acknowledged the company is not the market leader, he said its partnership with Microsoft could help Kind acquire government contracts. For instance, a potential deal with the state of California represents a big business opportunity for whichever firm submits the winning proposal.

Kind’s partnership with Microsoft will see the software giant work with Kind to develop a version of Agrisoft that allows state and local governments to track marijuana plants and sales as part of their compliance process. Microsoft will also host Kind’s software on its cloud server Azure Government.

“We are working collaboratively on obtaining government contracts in the U.S. and throughout the world,” Dinenberg said. “Microsoft is incredibly supportive and it’s been a great working relationship to date.”

BioTrackTHC, however, has already been awarded seven government contracts, including with states such as Washington and New York and a recent deal with the city of Arcata in Northern California. The state of Washington paid $782,000 to buy the company’s software in 2014 and the contract calls for nearly $300,000 to be paid annually for maintenance and support. BioTrackTHC’s product is used in more than 1,800 locations in the United States and abroad, according to the company.

Siva’s Bulbulyan said competition will be stiff, but once the larger players, such as Microsoft, enter the space, many will simply be acquired.

“When a company like Microsoft decides to come into the industry, they’re just too big to have to deal with going through the (request for proposals) process one state at a time,” he said. “They have the capital to acquire existing companies that have these state contracts.”

Dinenberg declined to discuss that prospect with regard to Kind.