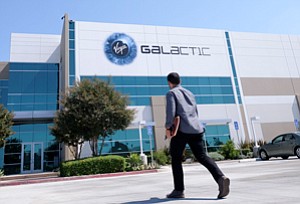 As the 200-plus workers at Virgin Galactic’s new rocket-building facility in Long Beach sit down to lunch or a coffee meeting, they can watch the fruits of their labor grow around them.

The cafeteria shares a corner of the 150,000-square-foot manufacturing floor, where the carbon composite components of the LauncherOne small satellite delivery system have been taking shape. By this time next year, LauncherOne could see its first flight, sending the first of what is hoped to be many payloads into orbit.

“It is a big milestone for us in that everything has moved off the computer screen and the blueprint,” said Will Pomerantz, vice president of special projects for Virgin Galactic, which has a spaceport east of Los Angeles in the Mojave Desert.

While launching satellites might give the company its first real foothold in space, the company’s other major – and far sexier – endeavor, putting tourists into orbit, has also hit a milestone.

Two years after one of the greatest disasters in the new commercial space race, the crash of Virgin Galactic’s SpaceShipTwo that killed the co-pilot and injured the pilot, the company this month began retesting the replacement spacecraft.

The Federal Aviation Administration last month granted a permit to begin testing, one year after the National Transportation Safety Board ruled the crash was caused by co-pilot error. The NTSB also said the potential for human error hadn’t been properly considered in the craft’s risk assessments, among other factors.

Building on what it has learned, Virgin Galactic expects SpaceShipTwo will follow in the contrails of LauncherOne.

“Now we’re in a scenario where the rocket motor is ready … and then also, all of the data from that previous vehicle test flight is still valid,” Pomerantz said. “It should allow us to maybe do more tests in a single flight than they did on the previous vehicle and also do the data tests more efficiently without compromising safety.”

While Richard Branson’s Virgin Galactic has been reluctant to project a specific date for its first flight carrying paying passengers to space, Pomerantz noted the company doesn’t have to rely on government contracts and so can move forward on its own schedule.

“That gives us good reason to hope that it will be relatively quick,” he said.

Still, the day Virgin Galactic or one of its competitors sends humans into space won’t come as quickly as many had dreamed.

Today’s private-industry space race has much in common with the early days of flight, said Peter Westwick, an adjunct professor of history at USC and director of the Aerospace History Project at the Huntington-USC Institute on California and the West.

Just as World War II spurred aerospace innovation and gave flight a boost, today’s space companies are building on NASA’s accomplishments over the past 50 years.

“People say government has been doing this long enough now, they’ve made the investment, and now private industry can take over,” he said.

Many thought this meant space travel would become routine and more accessible to the public.

“But we learned with the space shuttle that it’s not routine, and it’s still risky and it’s still expensive,” Westwick said. “Space has a way of correcting some of the more optimistic projections.”

Those risks became evident in SpaceShipTwo’s 2014 crash and a component-testing accident that killed three workers in 2007, as well as a Falcon 9 rocket exploding on the launch pad during testing this month by Space Exploration Technologies Corp. (SpaceX).

But the dangers haven’t stopped a growing crowd of aerospace companies vying to reach the stars – or at least low Earth orbit.

A slew of companies has been launching satellites into orbit for years, and many new ones have taken up the mantle as they develop an array of rockets.

Elon Musk’s SpaceX and Jeff Bezos’ Blue Origin are in a race to build the most effective reusable rocket, designing larger and more powerful rockets with the cost-saving capability of returning to Earth and landing.

Virgin Galactic, on the other hand, has built its manned space flight model not around transporting astronauts but regular people – as regular as someone who can afford $250,000 for a 3½-hour plane ride and about four minutes above 100,000 feet in low gravity.

Putting people into space was one of the pillars of Virgin Galactic when Branson founded it as an offshoot of London-based Virgin Group in 2004. The space company has reportedly received at least $600 million in funding from Branson, the Virgin Group, and Aabar Investments of Abu Dhabi.

Then there’s the LauncherOne being built near Long Beach Airport.

While many other satellite launch companies have gone with big, powerful, reusable rockets to deliver large payloads, Virgin Galactic sees a future in the growing industry of microsatellites.

Used by communications companies, academic institutions, and governments, these small satellites have increased in popularity.

“There’s definitely an expectation that there’s going to be an increased demand for launch services,” said Tom Stroup, president of the Satellite Industry Association in Washington, D.C.

According to the association, orders for the larger geosynchronous orbit satellites have declined in recent years. But 108 microsatellites, also known as CubeSats, were launched last year, after 130 were launched in 2014, compared with about 80 in 2013 and 20 in 2012.

The number of satellites in orbit has increased 39 percent over the past five years, the association said, with 1,381 operational at the end of last year.

For Virgin Galactic, that has translated to contracts to deliver satellites for NASA and communications satellite manufacturer OneWeb, among others, before the single-use LauncherOne is even completed, said Pomerantz.

The company is charging less than $10 million to send about 440 pounds into the most common satellite orbit.

That’s in line with the rate charged by competitor Rocket Lab, which is reportedly aiming to send 220 pounds into orbit for about $4.9 million with a new reusable rocket.

Unlike Rocket Lab, which began in New Zealand in 2006 and moved its headquarters to Los Angeles in 2013, and other companies, Virgin Galactic isn’t using a fixed launch pad for LauncherOne. Instead, the company plans to send its rocket into space from a 747-400 carrier aircraft that will take the spacecraft to 35,000 feet before releasing it. The rocket will take the payload into orbit before falling back to Earth.

Once at capacity, the Long Beach facility will be able to produce 24 of the smaller, cheaper rockets a year, a production output for which Pomerantz expects a high demand.

As exciting as the growth of microsatellites and cheaper launch vehicles might be, USC’s Westwick said that many of these trending ideas aren’t entirely new. The aerospace and satellite industries have toyed with such concepts off and on for years.

“Usually revolutions don’t occur in a day, a month, a year,” he said. “They take many more years than initially recognized.”