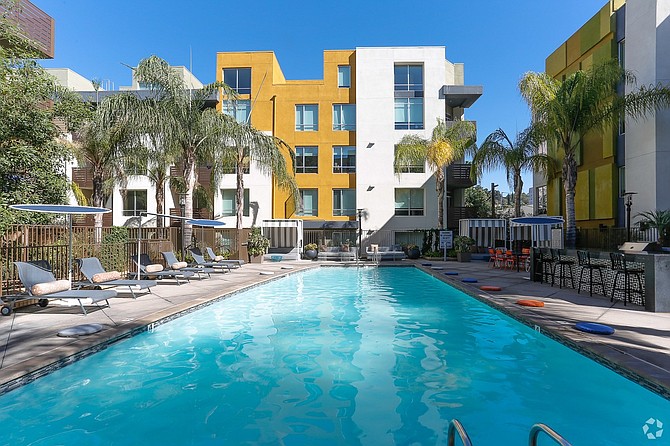 The Rubix Hollywood apartments on McCadden Place near the intersection of Hollywood Boulevard and North Las Palmas Avenue sold this month for $109 million.

The 218-unit building is 96 percent full, according to CoStar data. And with a location on McCadden Place near the intersection of Hollywood Boulevard and North Las Palmas Avenue – within a block of Hollywood & Highland Center, Ripley’s Believe It or Not! Odditorium, and the Musso and Frank Grill – the site was seen as a prime acquisition target.

“Rubix represents an excellent opportunity to invest in a high-quality asset in Hollywood’s thriving residential market,” Chris Hunt, senior director at New York Life, said in a statement. “We will begin renovating units and the common areas over the coming months so we can be well-positioned to take advantage of the strong tenant demand in this highly popular submarket.”

The Rubix was built in 2010 by Atlanta-based developer Wood Partners under the name Alta Hollywood. AIG Asset Management purchased the property the following year for an undisclosed amount. CoStar reported that the latest trade was an all-cash deal. New York Life Real Estate Investors, a subsidiary of New York Life Insurance Co., holds $46.3 billion in assets.

At $500,000 a unit, the deal tops a recent high mark for the area on a per-unit basis. The Jefferson at Hollywood, just one street over, sold to Essex Property Trust in 2013 for $120.5 million, or about $446,000 a unit. The Rubix deal is a sign that interest is still strong in Hollywood’s most bustling areas.

“For $500,000 a door, it’s a pretty solid price,” said Javier Rivera, a vice president in the capital markets group at Jones Lang LaSalle who was not involved in the deal.

Cushman & Wakefield’s Marc Renard, who represented AIG, declined to comment. AIG did not return a request for comment.