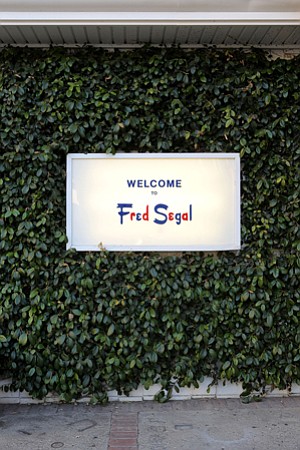 Editor's note: An earlier version of this story misstated the brand name of a hair salon based in Santa Monica. It is Matthew Preece.

The ivy-coated Fred Segal complex on Melrose Avenue looks much as it did when it opened in 1961: several brands selling designer apparel and decor are clustered in a building marked by a red, white, and blue “Fred Segal” sign. What’s not clear from its appearance is that the celebrated brand no longer has any relationship with the property.

That has the brand’s parent company, Sandow, ticked off at property owner CormackHill, which it claims is infringing on its trademark by misleading shoppers into thinking the Fred Segal sign on the outside has something to do with the stores on the inside.

“There is a substantial likelihood of confusion on the part of the public and clients regarding the use of the Fred Segal Marks,” Sandow argued in a complaint filed in U.S. District Court earlier this month.

Jason Cormack, one of CormackHill’s co-founders, said through a representative that the company is aware of the claim but declined to comment further. He added, in a statement: “The CormackHill investment is an iconic shopping center with long-term tenants and we have no immediate plans for change.”

The dispute comes as Sandow is four years into revamping the Fred Segal brand, which it bought from Fred Segal and his family in 2012. The company since has opened outposts at Los Angeles International Airport, and in Tokyo and Yokohama, Japan. A location in the SLS Las Vegas hotel opened in 2014 but closed last year. It is also planning locations in Hyogo, Japan, and at Runway Playa Vista, a nearly finished residential and retail development. In August of last year, Sandow announced plans for its first apparel line, Fred by Fred Segal.

CormackHill is unlikely to argue the building should be able to retain its name as a renowned location, said Daniel M. Klerman, a professor of law and history at USC. The case appears to be clear-cut trademark infringement.

“It’s not really the name of the building; it’s who used to live there,” he said. “When they leave the sign there and sell the same thing, they’re telling the public we’re the same store, and deceiving them.”

Fred Segal the brand grew out of a denim apparel business launched by its eponymous founder after his graduation from UCLA. The designer nabbed the space at Melrose and Crescent Heights Boulevard in 1961 and sold jeans for $19.95 a pair, according to the complaint. Needing to fill the rest of the space, he hand-picked designers to set up individual boutiques. The model proved so popular that he later replicated the concept in Santa Monica. Both sites became fashion landmarks.

The Melrose property, a low-slung white building of 29,000 square feet, stayed in the Segal family hands for decades. In 2001, the Segals sold the site to Bud Brown, Segal’s longtime insurance broker, according to public records, along with a license to use the name.

CormackHill picked up the site this March for $43 million. The company was co-founded in Vancouver, British Columbia, in March by brothers Jason, Lyndon, and Jamie Cormack with Brian Hill as a vehicle for personal real estate investments, according to a representative. Jamie and Lyndon co-founded Herschel Supply Co., a maker of backpacks and bags, in 2009. Hill is chief executive of Aritzia, a women’s apparel company founded in 1984 that is in the process of filing for an IPO and plans to open a location at Westfield Corp.’s Century City mall.

Ed Sachse, executive managing director for Beverly Hills real estate brokerage Kennedy Wilson, said at the time of the Fred Segal property sale that he had fielded interest from local and international companies as well as private and institutional investors.

Meantime, other changes were afoot.

When Fred Segal sold its brand to Sandow in 2012, it also sold its Santa Monica property to Dune Real Estate Partners. With the site slated to be torn down and replaced by a seven-story apartment building called 500 Broadway, the stores with the Santa Monica location began closing about a year ago.

Sandow signed a lease for 20,680 square feet at Runway Playa Vista in February, according to CBRE.

A representative at Ron Herman declined to discuss the dispute. Ron Robinson wouldn’t comment on the signage but said the Melrose store developed a “deep-rooted heritage” since opening 38 years ago. Gregory’s, meanwhile, is battling a lawsuit brought by Sandow that claims that the shoe store operated its Melrose store under the name “Fred Segal Feet” without permission. The case is set for trial in May.

“It’s hard enough in retail as it is,” she said. “Losing that street cred of the Fred Segal name, I think it’s going to impact them for sure and make it even harder.”

Jody Green, who until recently managed PR for the Santa Monica stores, agreed that losing the name could create challenges.

“You take away that iconic name and does it still have as much cachet?” she said.

However, Matthew Preece, a salon owner who worked under the Fred Segal moniker for more than a dozen years in Santa Monica, believes the name has not been essential to his success. He opened a salon on Wilshire Boulevard in Santa Monica last week. “I haven’t dropped a beat,” he said. “I changed the name of my brand to Matthew Preece and I’m doing as well as I did at Fred Segal.”