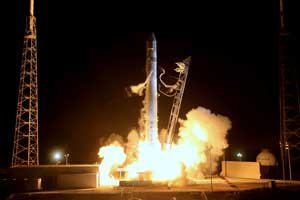 SpaceX Falcon 9 rocket launches at Cape Canaveral on May 22. Photo by Courtesy Photo

As part of an effort to run down every lead in its Falcon 9 rocket explosion investigation, Space Exploration Technologies Corp. is reportedly looking into sabotage, possibly by its rival United Launch Alliance.

During its rocket explosion investigation, a SpaceX employee asked for access to the roof of a United Launch Alliance building that was located about a mile away from the exploded rocket in Cape Canaveral Fla., reported The Washington Post. The purpose of the visit was to look at what appeared to be the destination of an unidentified object that flew by the Falcon 9 rocket around the time it exploded.

A representative of ULA did not allow SpaceX to examine its roof, but later granted access to an Air Force investigator. The encounter between the SpaceX employee and ULA representative was cordial, according to anonymous industry sources.

Regarding the possibility of sabotage, a SpaceX spokesperson said in statement that the “Accident Investigation Team has an obligation to consider all possible causes of the anomaly, and we aren’t commenting on any specific potential cause until the investigation is complete.”

The company’s rocket explosion is “turning out to be the most difficult and complex failure we have ever had in 14 years,” tweeted Elon Musk, SpaceX’s chief executive, earlier this month.

The Falcon 9 rocket exploded while fueling on its launch paid, destroying its $200 million satellite payload on Sept. 1. Initially, the company said it tentatively found a “large breach in the cryogenic helium system of the second stage liquid oxygen tank took place.”