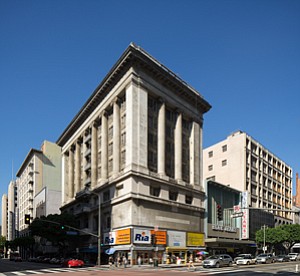 The Hilton Condominium Tower Initiative, Measure HH, would allow for two already-approved mid-rise condo towers slated to sprout up next to the Beverly Hilton to be replaced by a single 26-story structure and a 1.7-acre public park. Photo by Courtesy Photo

Chinese developer Dalian Wanda Group is poised to pay megabucks to the city of Beverly Hills in an unprecedented development deal for the construction of its elite condo-hotel project, One Beverly Hills.

The agreement, which awaits City Council approval, would require Wanda to pay an extra tax on top of the standard transient occupancy tax for its 134 hotel rooms. The company would also pay a percentage of sales on its 193 condos, plus $60 million in upfront fees.

“I’ve never seen anything like this,” said Alan Reay, president at Atlas Hospitality Group. “It is diametrically opposed to what’s going on in almost every other city in California. … In downtown, they’re giving away huge tax rebates to entice hotel developers.”

Not so in posh Beverly Hills, where a rivalry between One Beverly Hills and the Waldorf Astoria is underscoring the desirability of a Beverly Hills address. The Waldorf, being developed by Beny Alagem’s Oasis West Realty, is to be a single 26-story tower next to One Beverly Hills in place of two shorter towers that were already approved. The plan will go before Beverly Hills voters this week as Measure HH, with Wanda fiercely opposing the idea.

“Beverly Hills is one of those cities where everyone wants to be there,” said Bruce Baltin, managing director of CBRE Hotels, “but there are limited opportunities for development.”

The development agreement, described in a city statement, hikes up the rates drafted in an earlier version of the agreement. It would require Wanda to pay a new “municipal surcharge” of 5 percent of gross room revenue in addition to the 14 percent transit occupancy tax. Montage Beverly Hills and Waldorf Astoria also pay this extra 5 percent tax, reflecting the premium for any hotel developer to operate in Beverly Hills.

The agreement would also increase environmental and sustainability fees, requiring Wanda to pay 1.25 percent of the first sale of any part of the property, and 2 percent of any sales to follow. Finally, it would double the upfront fees, bringing that cost to $60 million.

Beverly Hills officials estimate that the project will generate roughly $820 million in revenue to the city over the next three decades.

Originally intended by developer Townscape Partners to rise 234 feet, the project will now reach only 178. It will also shrink by 20 units. Various other concerns raised by Councilman David Ryu – over community benefits, parking, traffic, and affordable housing – were also addressed in the revised plan.

“Compromise is never easy,” Ryu said in a statement. “And while this compromise isn’t perfect, 8150 Sunset Blvd. is a much better project today.”

The fate of a Chase bank on the project site, built in 1960 with a zigzag folded plate roof, is still pending. If the City Council deems it a historic cultural monument, the developer would only be able to demolish it after a rigorous city review. One option would be to relocate the building.

Tyler Siegel, a Townscape partner, said in a statement that he is pleased the development can move forward.

“Our aim has been to create a timeless and important project that is genuine to L.A.’s creative and progressive identity,” he said.

For Ryu, the project underscored the need for a rethinking of California’s density bonus law, which allows developers to build big if they incorporate affordable housing.

“He feels we are incentivizing developers to build much larger projects for just a few more affordable units,” said Estevan Montemayor, Ryu’s communications director. “He doesn’t feel the exchange is equitable.”

A 100-year-old downtown building is now a sign of modern times. The Merritt Building at Eighth Street and Broadway sold last week for $24 million, or about $429 a square foot, a high price given that it’s missing something important: tenants. Built in 1915, the nine-story building is empty except for ground-floor retailers. Cushman & Wakefield’s Mike Condon Jr. and Kelli Snyder represented the seller, LIZ, while Avison and Young’s Derrick Moore represented the unnamed buyer, who is considering redevelopment options.