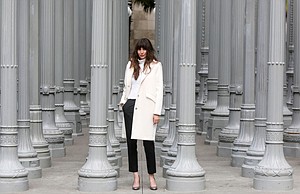 Standing Out: Sharón Zoldan amid the ‘Urban Light’ sculpture at LACMA. Photo by Ringo Chiu.

While collectors might drop serious cash on a painting because they like how it looks, some have a less emotional connection: Fine art is a commodity and they see it as an investment.

It is an asset class that has unusual quirks compared to stocks or bonds. Though some have reaped major windfalls – a Picasso painting fetched more than $179 million at auction last year – like other markets where value is often subjective, investing in art can be fraught with risk.

Art as an asset saw annual returns of about 6.5 percent from 1972 to 2010, according to Stanford University researchers. However, an equity portfolio constructed with the same risk profile as art would yield roughly seven times greater returns, according to their data.

“It’s not like going to the New York Stock Exchange and getting $10 million worth of stock,” he said. “The liquidity is not the same.”

It can sometimes be challenging to find buyers for lesser known names, said Sharón Zoldan, 29, a Silver Lake art consultant and adviser.

“If somebody were to approach me about selling something like (an Andy Warhol), there’s always demand for that,” Zoldan said. “But if they’re more off the grid and if people are not clamoring for it, it can be harder to place.”

Sales data can also be hard to track because art is bought and sold without a central clearing system or regulatory authority, said Evan Beard, national art services executive for U.S. Trust in New York, whose division handles art-secured lending and collection legacy planning, among other issues.

“Half of all transactions are not publicly reported,” said Beard. “There’s a level of opacity in that market that doesn’t exist in stocks and bonds.”

But unlike other investments, art can bring its owner aesthetic pleasure and social or cultural capital.

“That intangible return has a very real value,” Beard said. “There is an expected lower return on the financial side because of that.”

Pieces by emerging artists can range from roughly $2,500 to $20,000, while work by more established names can cost $50,000, with prices climbing into the millions, Zoldan explained.

And just because something is old doesn’t mean it’s necessarily worth more. Paintings and drawings by Old Masters or their contemporaries can at times be much more affordable than contemporary artists.

“It’s just not as desirable, not in demand,” Zoldan said. “The conversation is ongoing (with) people who are alive and making things.”

Such work can also be popular because it reflects what’s going on with society.

An artist’s name can ascend in value as museums and other institutions show or buy their work and they get reviewed by reputable publications such as Artforum or Frieze Magazine. Still, Zoldan said she steers clear of so-called auction darlings: artists whose pieces might appreciate rapidly. She said they can lack substance or institutional support, and the market for such art can plateau or disappear.

Buyers also need to keep in mind that artwork’s cost involves more than its sticker price.

“Art does not pay any sort of dividend, and it requires upkeep, storage, and insurance,” Beard said, adding that there are also hundreds and thousands of submarkets that have their own supply and demand quirks.

For example, the supply of an auction is usually handled three months prior to the event, when demand comes into play. Many consignors sat out this recent spring cycle because of volatile capital markets, oil’s downward spiral, and recession speculation, Beard said. But demand at those auctions wound up being strong, particularly for contemporary art.

Perhaps the most striking difference between art and other assets is the set of unwritten rules that people follow when selling it.

Compared to the churn common in real estate and equities, “flipping the work is highly frowned upon,” Zoldan said. “You’re going to burn bridges.”

And those connections with artists and galleries are crucial in a world where some of the best pieces might not be displayed for the public, but rather held for loyal patrons. It’s also considered proper decorum when selling art to first return to the gallery or person from whom you originally bought the piece in case they’d like to buy it back.

“Most galleries want to very closely manage the upward progression of their clients,” Beard explained. “They don’t want someone to overheat or have a work fail to sell at auction. That can have a pretty large downward effect overall on artists’ work.”

Beard sees a big shift underway in which younger collectors are more likely to view their art as an asset. For instance, they’re more adept at using their art as collateral for loans to free up capital, and more sophisticated at collection management, such as dealing with insurance. They’re also more willing to sell their art while building a collection, Beard said, citing a recent U.S. Trust survey of more than 600 high-net-worth adults.

Still, some advisers and collectors aren’t looking to squeeze every last penny out of a deal. Zoldan said she doesn’t like to negotiate the price of works by emerging artists who aren’t yet earning much money per sale.

“You’re supporting an economy, not just artists and dealers, but everyone involved in between,” Zoldan said. “I think you need to navigate with a moral compass.”