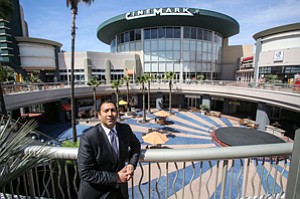 Selling New Experience: Austin Khan at Westchester’s Promenade at the Howard Hughes Center, which is undergoing a $30 million upgrade without a big-box tenant. Photo by Ringo Chiu.

Anchors once had enough mass to hold a shopping mall in place. These days, having one can really weigh a project down.

Landing a large department store tenant was once the aim of every retail developer with a big project in the works. But as many of those chains have retrenched, leaving huge vacancies in their wake, mall owners have been forced to chart a new course.

Many are ditching the anchor store concept. The latest planning a sweeping makeover is Westchester’s Promenade at the Howard Hughes Center, which has tacked toward an approach that calls for smaller stores and amenities such as eateries, fire pits, and art deco facades.

As part of a $30 million upgrade of the Westchester mall, the portion of the project once occupied by Nordstrom Rack, which left before Laurus bought the property in 2012, will get chopped into smaller spaces. Khan plans to fill that nearly 42,000-square-foot space with a mix of retailers and restaurants, seeking out unique and experience-driven businesses keen to capitalize on the Playa Vista boom less than three miles away. He said he expects renovations to begin by the fall and to be completed early next year.

“It would be easy to bring in a big-box retailer, but it’s not what the center needs to be successful in the long run,” Khan said. “And it’s not a good fit for the what the community is looking for.”

Shopping malls for decades followed the same design concept: a large retailer with a well-known name – think Macy’s, Walmart, and Nordstrom – sat amid dozens of smaller stores. The sheer gravity of the anchor store, the thinking went, would draw enough traffic to the center that all would thrive. It was a symbiotic relationship: Anchors often pay lower per-square-foot rents than other shops and can serve as the blue-chip tenant that is the linchpin in securing construction financing.

That business model – like so many others of its time – has largely been rendered obsolete with the rise of e-commerce, as shoppers opt for the convenience of clicking over the hassle of parking.

As a result, in large part, of these shifting patterns, retailers that once blazed their logos across big-box anchor stores that took tens of thousands of square feet are cutting back. Macy’s Inc. is closing nearly 40 stores, including a location in Irvine. The chain reported a 31 percent drop in earnings last quarter. Kohl’s Corp. recently announced it would close 18 stores, including seven in Southern California, after seeing fourth-quarter profits fall by 20 percent. Sears Brands is cutting back on its Kmart and Sears stores, and Walmart Stores Inc. is adjusting its footprint – closing more than 150 stores nationwide but planning to open 140 in the next year.

With anchors sinking, he said, “the question for my industry is how do you re-tenant those buildings? How do you split them up and make them work for multiple operators? It’s a redevelopment challenge that we’ll be looking at for a long time.”

For Laurus, faced with a huge empty space and a burgeoning tech and residential scene nearby, those questions meant thinking small.

In the 16 years since Howard Hughes opened, nearby Playa Vista has emerged as a hub for tech companies, attracting affluent residents. Feeding off that growth, a new complex at the Howard Hughes Center, to be called the Village at Howard Hughes, will add 375 residential units. A nearby apartment project called Altitude will be home to 545 more.

Both projects, currently under construction, could attract the young professionals that Khan considers a key demographic for his revamped Promenade.

“If they’re going to take a trip and go to a shopping center, they’re looking for something more experimental,” he said.

It’s an adjustment several other malls are in the process of making.

Call it the Caruso effect.

Many of these renovations follow the model of developer Rick Caruso’s popular Americana at Brand in Glendale and Grove in L.A.’s Fairfax District, walkable outdoor centers that are designed to look like quaint small towns complete with grassy parks, trollies, and fountains. The idea is to give customers a pleasant place to linger so they won’t just park, shop, and leave.

“Caruso does a phenomenal job with his place-making and his tenants,” said Jeff Kreshek, senior vice president for West Coast leasing at Federal Realty, which last summer opened the Point shopping center in El Segundo. In recruiting tenants such as candy shop Sugarfina and exercise studio SoulCycle, Kreshek aimed to create multiple experiences for drawing in shoppers. There are even free yoga classes on Sundays.

Among the malls facing the same predicament as Promenade at the Howard Hughes Center is Westside Pavilion. Nordstrom, its anchor tenant, will relocate to Westfield Corp.’s Century City mall next year, leaving a 150,000-square-foot vacancy across three floors. Westside Pavilion’s owner, Macerich Co., is said to be planning a renovation that would open ground-level retail to the street, but it has not yet revealed plans for the Nordstrom space.

Macerich spent $265 million to renovate its Santa Monica Place in 2010, stripping away part of the roof to create an outdoor dining court overlooking the ocean.

Other mall renovations underway are similarly expensive and elaborate. Westfield is working on an $800 million expansion of its Century City mall and plans to open the West Coast’s first Eataly, chef Mario Batali’s gourmet food hall, there. The boxy, windowless Beverly Center recently detailed plans to spend $500 million on upgrades, including skylights, a food hall from chef Michael Mina, and street-level restaurants. Macy’s Plaza in downtown Los Angeles will reopen this summer as the Bloc after a $180 million renovation by Ratkovich Co. that has torn away the mall’s roof to create a three-level retail plaza open to the sky.

“Traditionally, you needed the anchor to bring in the masses. There’s no one tenant I can point to and say – that’s my traditional anchor,” said Federal’s Kreshek, talking about the Point. “Our anchor is a 45,000-square-foot park, a collection of restaurants, and a collection of retailers.”