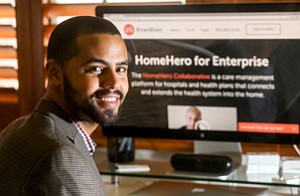 Online elderly caregiver marketplace HomeHero of Santa Monica last week started offering full-time jobs to its 1,200 independently contracted workers – one of the biggest such shifts in workforce status by a tech startup in memory.

HomeHero said the switch is part of an effort to sign lucrative in-home care deals with hospitals because employees, not contractors, are necessary for that work. Still, the massive hiring effort touches on a fierce debate surrounding the employment status of workers.

The company, which had only a 30-person staff, works kind of like Uber. Instead of matching contract drivers with ride seekers, HomeHero matches in-home caregivers who work as independent contractors with elderly clients through an algorithm and by facilitating online video interviews.

However, under IRS rules, HomeHero could not direct independent contractors to complete health care checklists or follow strict patient privacy guidelines, which the company needs to do in order to win hospital business, said HomeHero Chief Executive Kyle Hill.

“The data collection that we want to do, to truly integrate ourselves into the hospitals, particularly accepting patient health data and sending information back to the (electronic medical records), that would require W-2 employee status,” said Hill. “We instruct the caregivers to collect an enormous amount of information about the patient after the shift is over. You can’t do that with 1099 (nonemployee) workers.”

Yet HomeHero’s decision to categorize caregivers as independent contractors at all is suspect, according to several labor lawyers and the caregiver industry experts.

“This sounds an awful lot to me like it is misclassification,” said Tia Koonse, legal and policy research manager at the UCLA Labor Center, noting that it would be tough for HomeHero to continue to use the independent contractor status, even without hospital contracts. “It is exceptionally rare that I see any court or labor hearing officer decide that any caregiver is an independent contractor. In this industry, almost every single worker is an employee.”

The IRS allows workers to be designated as independent contractors, or 1099 tax-form status, if employers maintain the right to control or direct only the result of work, not what will be done and how it will be done. For a business to exert greater control over a worker, it must designate an individual as an employee, or W-2 tax-form status, and pay health care, Social Security, workers compensation and other taxes.

But HomeHero argues those provisions haven’t applied to them at all until this point because the company acts as a domestic referral agency for clients and caregivers.

“In theory, (clients) could hire the caregiver, but 100 percent of our caregivers up to this point have been independent care providers,” said Hill.

Though HomeHero operates as a referral agency, the company also sets hourly rates at $19, asks clients to make payments through the company’s website or app, and handles tax forms. The company’s website shows pictures of workers wearing company uniforms, though it doesn’t require caregivers to wear its uniforms. HomeHero takes a 20 percent cut on hourly rates for its services.

HomeHero allows clients to set worker hours through its online scheduling tool, but caregivers have the right to accept or decline proposed schedules. However, caregivers can be removed from the HomeHero’s marketplace if they fail to show up for an accepted shift, according to the website.

Some legal experts argue that HomeHero and its clients hold a significant amount of control over its independent contractors’ work and therefore the company could be violating labor law.

That criticism has been leveled at other on-demand tech companies who utilize independent contractors, and opponents argue the tactic is designed to avoid paying benefits and keep costs down.

“With technology you can enable people to be freelancers, so they can do what they like to do with their life,” said Rattan Joea, chief executive of ridesharing service Opoli of Hawthorne, which uses independent contractors. “A majority of the people don’t want to be an employee.”

The battle over worker status has now reached the courts for several tech companies.

San Francisco on-demand ride service Uber Technologies Inc. and dry-cleaning service Washio Inc. of Santa Monica are being sued for by former workers who claim they were misclassified as independent contractors and are owed employee benefits. The Uber lawsuit was filed in San Francisco Superior Court, while the Washio case is in Los Angeles Superior Court.

HomeHero is not facing any labor-related legal proceedings, but some see its change in worker status as a move to get on the right side of labor regulations.

“HomeHero has done a nice spin on why they are now changing the way they are classifying their caregivers from contractors to employees,” said Sherwin Sheik, chief executive of San Bruno’s CareLinx, a rival online caregiver marketplace. “The truth is they were eventually going to have to change their model to become compliant with labor laws.”

HomeHero could also be at risk of being fined for willful misclassification should workers file complaints with the California Labor Commission, said Ruth Silver Taube, partner at law firm Silver & Taube of Sunnyvale.

“I think these guys have done a cost-benefit analysis, including the cost of paying benefits to employees,” she said. “It’s more economical (to switch worker status) because if a few workers challenge this, they are going to lose. I think it’s a wise decision because I think it now comports with the law.”

“We operate 100 percent legally,” he said. “Nothing was forcing our hand to make this decision. This was a strategic decision.”

HomeHero’s payroll costs could significantly rise with the addition of employee benefits.

On average, for every dollar paid to traditional employees in wages and salaries, homecare services companies pay about 30 cents in taxes, benefits and legally required insurance, said Robert Habans, research associate at UCLA’s Institute for Research on Labor and Employment, referencing a recent study he conducted of the home care industry.

But those added expenses could be offset by the gains HomeHero sees in expanding its business to include serving recovering patients at home.

While caregivers are not qualified to handle many medical care tasks that registered nurses, physician assistants and doctors provide, they would be able to perform support tasks at a much lower cost, such as bathing patients, cleaning and collecting basic medical data.

Health care experts think that the potential for in-home caregivers to integrate with medical providers is a big opportunity to help the health care industry cut costs.

“I would point out that 10,000 people turn 65 in this country every day and virtually all of those are qualified for Medicare,” said Andy Edeburn, vice president at GE Healthcare Camden Group of Chicago. “Opportunities to serve people in home are going to explode because we don’t have enough real estate to care for these people (in hospitals). And surveys show nine out of 10 people want service in their home.”

HomeHero hasn’t yet signed any deals with health care providers to serve out-of-hospital patients, said Hill, and several health care experts said such partnerships are still rare because the concept is in the early days of adoption.

In order to go after such deals, Hill said he and other HomeHero staff members would speak with every caregiver using the service over the next three months and offer them employee status.

According to him, the financials make sense.

“Trust me,” he said. “We wouldn’t be making this move if we didn’t think this wouldn’t work.”