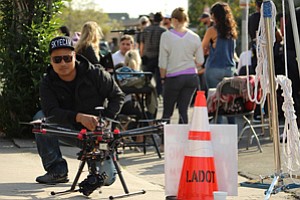 In a decision that drone filming industry advocates say will relieve regulatory burdens, the Federal Aviation Administration has announced new rules for the commercial use of unmanned aircraft weighing less than 55 pounds.

Drone operators are no longer required to obtain a pilot’s license, file a pile of paperwork, and wait for FAA flight approval. They will now be able to pilot drones as long as they have taken ground school and passed a written FAA knowledge test.

“It will make drone filming a lot easier,” said Keith Kaplan, interim chief executive of UAVUS, a Beverly Hills-based association of professional unmanned aerial vehicle operators. “This is going to usher in a new era of aviators that are unmanned aircraft pilots.”

The rules are not likely to go into effect for a couple of months, pending the schedule for public comments, but should free up L.A. drone operators to take on more work and perfect their craft, said Kaplan.

“Los Angeles is ground zero for the innovation and the proliferation of air robotics,” he said. “Just as Los Angeles has created Steadicam technology, it’s been the leader of creating and accepting air robotics in the creative arts.”

There will still be restrictions on the ways drones are flown, including a speed limit of 100 mph, an altitude restriction of 400 feet, limitations on flying at night, and the requirement that operators keep a line of site on their drone. But the relaxed rules should be a boon for business, said JJ Trinidad, owner and operations manager of Hollywood-based Skyecam, which does drone filming for TV shows, film shoots, real estate promotions, and industrial inspections.

“We are very excited about the new rules because we no longer have to do the FAA plan of activity, certificate of operation, and notice to airmen,” he said. “We lost a lot of business because of all these strict regulations.”

The previous requirement that drone operators get a pilot’s license was particularly frustrating, said Trinidad.

“Anyone who flies unmanned aircraft knows that flying drones has little to do with flying with a manned aircraft,” he said. “A lot of people went out and wasted their time getting their pilot’s license when they didn’t need to do that.”

While regulations are generally moving in the right direction, there is work to do, such as making it easier to fly at night, said Trinidad.

“Technology is always going to advance faster than policy,” he said. “In order for this country to grow technologically and economically, they need to embrace this technology.”

“Los Angeles is geographically diverse and that makes it really difficult if you are recruiting to one location,” said Doug McPherson, its chief administrative officer.

The technology firm opened an office in Culver City last week to accommodate about 35 employees and help recruit more engineering talent from the Westside.

“We are looking for a broad set of software developers,” McPherson added. “Right now recruiting is one of the biggest factors for our growth.”

OpenX’s revenue increased 40 percent last year to more than $140 million. To match its growing business, it has been on a hiring spree. The company has added 150 employees since the end of 2014, bringing its total head count to 500, McPherson said.

Ultimately, OpenX didn’t look at many at other locations on the Westside apart from Culver City, and it ignored Santa Monica entirely.

“We want an office that is centrally located,” he said, noting the city’s proximity to the 10 and 405 freeways. “Culver City has lots of restaurants, amenities, and the Expo Line runs through there now.”

By caring for patients in their homes rather than costly hospital rooms, the program aims to reduce inpatient readmissions, increase patient satisfaction, and improve health outcomes, all while reducing care health care costs. HomeHero’s caregivers will assist customers with personal care, housekeeping, and medication management.

In particular, the program will be targeting cost reductions mandated by the Affordable Care Act and Centers for Medicare and Medicaid Services regulations. Health care providers can face steep fines when patients are readmitted within 30 days and are encouraged to create bundled payment systems emphasizing value-based care.