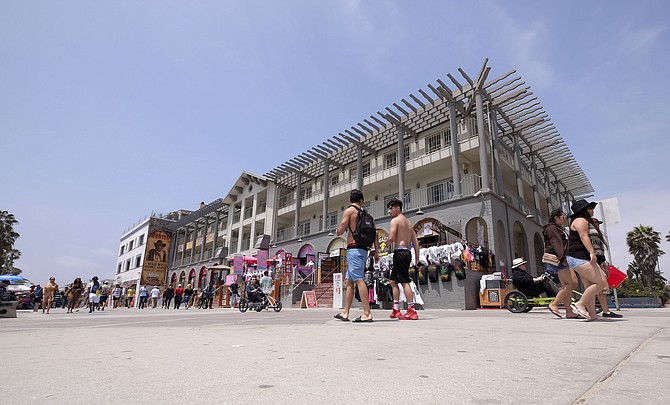 Building on Ocean Front Walk in Venice where Snapchat may expand. Photo by Ringo H.W. Chiu/LABJ

Boasting a gaudy valuation north of $17 billion and more daily users than Twitter, Snapchat Inc. is the biggest unicorn in Silicon Beach. It’s also one of the hungriest consumers of real estate, snapping up leases for offices and residential properties in Venice and Santa Monica, turning its beachside neighborhood into a sprawling urban campus.

Determined to cling to Venice’s counterculture despite the need for a corporate-scale workforce, Snapchat has opted to pick off properties here and there rather than consolidate into a single space. Its strategy can be seen in the series of deals it has struck over the last couple of months, including leasing an entire 25-unit apartment building at 29 Navy St.; 10,525 square feet of office space at 248 Westminster Ave.; and negotiating the lease of 80,000 square feet of office space at Santa Monica Airport. A firm connected to Snapchat also acquired 909 Ocean Front Walk in Venice, where Snapchat rents 5,000 square feet and is poised to take the entire 33,000 square feet.

Led by 26-year-old billionaire Evan Spiegel (No. 34 on the Business Journal’s list of Wealthiest Angelenos with an estimated net worth of $1.6 billion), Snapchat is still in expansion mode and considering virtually all available office locations on the Westside.

Working with many real estate brokerages, the company has not shown an interest in buying or building from scratch, as Google Inc. and Apple Inc. have done in developing their Silicon Valley campuses.

Snapchat declined to comment on its real estate activity. A spokesman said via email that the company was not “announcing anything along those lines right now.”

Snapchat might be reaching the end of its Silicon Beach land grab. By one estimate, it and Google have absorbed 20 percent of the Venice market, there’s little room to build new offices of substantial size, and there are a slew of smaller companies hungry for extra room.

He predicted that tech companies would begin to head east, possibly along the new light-rail line, but they would resist roaming too far from the beaches, bars, and shops of Santa Monica and Venice.

Meanwhile, demand for space in Venice is pushing rents up across the community.

“Space is at premium in Venice,” said Melanie Camp, a writer for neighborhood news site Yo Venice. “Lots of people blame (Snapchat) for pushing up prices and pushing up rents.”

But discontent appears to have cooled since last year, when Snapchat leased a 50-unit retail center at Abbott Kinney and Venice boulevards, forcing out a number of small businesses. A year earlier, the company rankled locals when it pushed Teen Project, a nonprofit aiding homeless youth, out of space on Market Street.

Snapchat has since been on a charm offensive, reportedly planning to spend $500,000 on community service this year, aiding organizations such as St. Joseph Center and Safe Place for Youth, and has not triggered any major new displacements.

“It’s that whole ghost thing,” Camp said, referring to the company’s logo. “They lay low and don’t make a splash in the community.”

Perhaps the most interesting deal Snapchat has struck has been a master lease for the 25-unit Navy apartment building a block from the beach. The company signed the lease with Santa Monica developer Jeff Worthe in May and has options to renew every year for three years, according to a source familiar with the deal. It plans to use the building to house interns. Worthe, who declined to comment on the deal, bought the 13,850-square-foot building last year for $9 million, according to data from CoStar Group Inc.

A website for the property boasts of its creative lofts, with photos of airy units sporting palm tree views, new kitchen appliances, and hardwood floors. Bicycles line the patio, which is equipped with an outdoor shower.

Given Venice’s expensive residential market, locking up housing for employees was seen as a smart move in Snapchat’s campaign to attract talent.

“There is a need to help young entrepreneurs and young engineers find affordable housing in tech communities where values tend to go up and up,” said Jennifer Post, an attorney at Raines Feldman in Beverly Hills who advises tech companies.

A 15-minute walk from the Navy site, Snapchat has signed to take the three-story, 10,525-square-foot Westminster building, according to sources working in the market. Grant Newman, executive director at the property’s leasing representative, L.A. Realty Partners, declined to comment.

Furthest afield has been the deal Snapchat is pursuing at the Santa Monica Airport, where it was drawn by the allure of 80,000 square feet, sources said. City documents show Snapchat is negotiating terms of a lease for the site, which includes eight hangars and two office buildings where it would spend $1.4 million on upgrades. Terms under discussion are for a five-year deal at about $3 a square foot – a bargain compared with the going $5-a-foot rate in Venice. Snapchat would be the first major tech company to nab space at the airport, a 227-acre site near the Santa Monica-Venice border.

Despite this activity to the east, Snapchat still calls Venice home.

It took about 5,000 square feet a year ago on Ocean Front Walk in a building that houses the headquarters of architecture firm Jerde Partnership, according to sources familiar with the property. Sources familiar with the site, which sits on separately deeded land, said Snapchat brought in an investment group, Snapshot Partners, that acquired the leasehold interest in the building for $32 million in March. That limited liability company is controlled by Cambra Realty’s Michael Schlesinger, according to sources with knowledge of the deal.

Schlesinger did not return emails requesting comment. The seller was an ownership group including Janice Jerde, who was married to late architect Jon Jerde. The land was not part of the transaction.

The Jerde firm is looking to relocate, and Snapchat has a right of first refusal for the full 33,000-square-foot space when it becomes available.

Snapchat, originally housed in a tiny blue bungalow on the Venice boardwalk, bought a 6,000-square-foot building on Market last year for $6.8 million, according to CoStar, which houses the company’s headquarters. It leases several thousand square feet across the street. On nearby Ocean Front Walk, it signed a lease in 2014 for the live-work Thornton Lofts, and around the corner it rents a penthouse and roof deck of an apartment building on Brooks Avenue. It is preparing to move into about 4,000 square feet in a retail strip at Venice and Abbot Kinney boulevards, for which it signed the lease last year.

The land grab has prompted some to wonder whether Snapchat would eventually buy property, investing in a hot market and avoiding inevitable lease hikes. But the idea might be risky for a company whose expertise lies elsewhere, tech investors said, especially if Snapchat were to get stuck with an asset that no longer fits its needs.