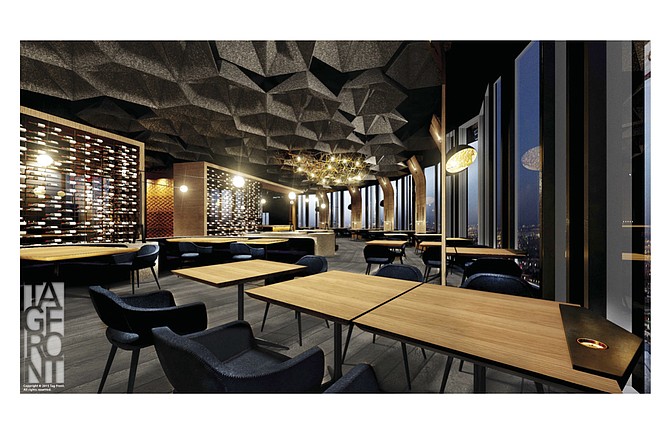 71Above is set to open later this month on the 71st floor of downtown’s U.S. Bank Tower.

Opening any restaurant is tough, but especially when it sits atop the tallest building in the West.

“It’s not for the weary,” said Emil Eyvazoff, who conceived of 71Above, set to open later this month on the 71st floor of downtown’s U.S. Bank Tower.

The fine-dining restaurant cost $6 million to develop, a process that began in 2013 when Singapore-based Overseas Union Enterprises Ltd. bought the building and decided to replace top-floor offices with a restaurant and observation deck.

Eyvazoff, who previously opened popular sushi restaurant Takami on the 21st floor of another downtown office tower, was tapped to lead the project, which required significant renovations to the 10,000-square-foot space. First to go were the 190 windows encircling the floor.

“If you’re sitting having lunch on the 71st floor on the south side of the building, you’re not going to enjoy that, because you’re going to cook under the sun,” he said.

Instead, Eyvazoff installed windows that can dim under bright light, while some 50 vents let in fresh air and the buzz of the streets.

He also mounted a black honeycomb ceiling inspired as much by aesthetics as acoustics, aiming to allow power players to easily talk business.

“We want to be that place where all the big deals in L.A. happen,” said Eyvazoff, who also expects 71Above to draw tourists and Angelenos celebrating birthdays and anniversaries.

Chef Vartan Abgaryan (Cliff’s Edge) is planning American dishes with multicultural flair, while General Manager Alex Hasbany (the Palm) will oversee operations. The menu is still being set, but Eyvazoff said he will likely include an 18 percent service charge. The idea is to split the gratuity among both wait staff and cooks, while relieving diners of the chore of calculating tips.

“We’re building an experience,” he said. “You come and sit down, and you’re supposed to be in another world.”