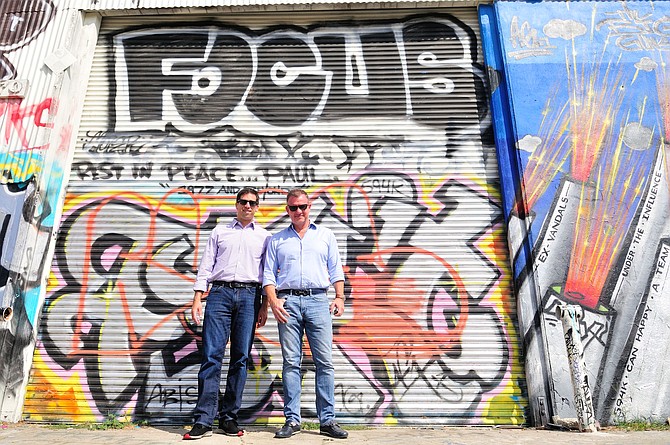 Howard Kozloff’s West L.A. development firm Agora Partners had always built its projects from theground up. But now, faced with the prospect that an initiative heading toward the ballot could ban big construction projects for two years, he decided to convert an El Sereno warehouse into offices rather than take it down and start from scratch.

“We thought that whatever happens, we can rent this out at a certain price and we’ll be OK,” he said. “We were much more confident that we’d be able to get it done.”

As supporters gather signatures to put the so-called Neighborhood Integrity Initiative on the March ballot, developers are gearing up to duck bullets.

If passed, the initiative would put a two-year ban on projects that require zoning variances or other dispensation from city planning rules. With projects springing up in areas of Los Angeles that city planners never envisioned decades ago as desirable for big development, the initiative could have wide-reaching impact.

Some developers are holding off from acquiring land that lacks entitlements, instead redeveloping existing structures or focusing on other cities.

“We’re basically on hold,” said developer Bob Champion of Champion Real Estate Co. in West Los Angeles, adding that he has been unwilling to pursue about a half- dozen potential deals in the last three months. “I don’t think anybody in this environment would acquire unentitled land.”

Others are hurrying to submit plans before March to secure the right to proceed under current regulations, even if the initiative passes.

Adding to the pressure, a different initiative on this year’s November ballot would also force developers to change the way they work. Called Build Better L.A. and backed by the Los Angeles County Federation of Labor, it would require multifamily developers to build low-income housing into their projects or allocate funds for its construction elsewhere as well as devote construction jobs to low-income people or local residents.

Although votes on both initiatives are months away, land-use consultant Joel Miller, vice president of engineering consultancy firm Psomas in downtown, said developers are already aiming to toughen their armor.

“This is another layer of protection,” Miller said. “This may be the last project they work on for a couple of years.”

“It’s the wild, wild west,” she said. “You can get addicted to a bad system.”

L.A.’s zoning is its genetic code, instructing developers on what types of buildings they can construct and where, putting limits on height and bulk. But the code was written in 1946. It began as a slim booklet of less than 100 pages and has since morphed into a cumbersome document at least six times that size.

In 2014, city planners began updating the document, a chore expected to take at least until 2017. L.A.’s General Plan, a framework for urban development related to land use, traffic, housing, open space, conservation, and safety, is also considered out of date. Developers must also grapple with the city’s 35 community plans, with specific instructions for neighborhoods from Brentwood to West Adams. Most haven’t been updated in about two decades. Mayor Eric Garcetti in April pledged to speed up the process by allocating $1.5 million in the proposed 2016-2017 budget.

Developers interested in building large projects, especially multifamily, said they have been hampered as they are forced to jump through ever-more hoops. Development opponents contend builders are putting up far beyond what should be legally permitted.

The Coalition to Preserve L.A. has been particularly vocal, launching the Neighborhood Integrity Initiative last year as a way to halt dense, tall developments in areas that it says are overcrowded.

“The City Council and mayor routinely let developers build bigger and taller than the General Plan/zoning allows – at the clear expense of a community’s traffic, infrastructure, and character,” the initiative’s petition reads.

It would impose a two-year moratorium on any project requiring a zoning change, height district change, or amendment to the General Plan in order to build at a bigger size or greater density than otherwise allowed. It would also require city planners to review and update the General Plan every five years.

The coalition’s main backer, the Hollywood-based AIDS Healthcare Foundation, has fiercely attacked large developments it deems too big for their surroundings. For example, it opposed Miami-based developer Crescent Heights’ proposed Palladium Residences in Hollywood, planned as a pair of 28-story towers with 730 units. The City Council approved building plans in March, but AHF immediately followed up with a lawsuit.

“This is yet another flagrant example of the ‘pay to play’ culture infecting Los Angeles involving developers, the City Council, the Planning Department and City Hall,” said Michael Weinstein, AHF president, in a statement at the time.

The sense of flux has left developers considering whether to seize a fast-closing window of opportunity or wait to see if the initiative passes.

“A lot of projects will take six months or a year to reach the stage where they’re detailed enough, with enough architectural plans and other things have been resolved to file an application,” he said.

He is working on several projects that would not be permitted under the Neighborhood Integrity Initiative, including a new Los Angeles LGBT Center in Hollywood that would provide senior and youth housing. The center’s chief executive, Lorri Jean, said she was relieved the project’s applications were submitted well in advance of the initiative vote.

Robin Hughes, president at affordable housing developer Abode Communities of downtown, is trying to get around the initiative’s restrictions by not buying any land where development would be limited under the construction ban. (The initiative exempts affordable housing projects from the two-year moratorium, but only if they do not need a General Plan amendment.)

“We are really trying to limit our acquisition risk in the city of Los Angeles, and therefore only looking at opportunities that do not require any discretionary approval beyond the state and city bonus, which really does limit the level of work we can do,” she said.

One of the nonprofit’s projects, a 120-unit housing complex near USC that needed a General Plan amendment, is one that it would not pursue today.

“We wouldn’t want to take the risk of holding on to the property until the two-year moratorium had passed,” she said.

Occasionally, Abode finds land that would be fully exempt from the initiative’s restrictions, such as a property in McArthur Park for which the firm is in escrow. But such sites are rare.

“We do have to pass on those opportunities where we could produce housing,” Hughes said.

Champion, of Champion Real Estate, is similarly slowing operations, anticipating not only a two-year moratorium but possibly a longer freeze. His urban infill development division had been looking for opportunities to build residential projects along L.A. transit lines, but has in recent months backed off from about a half-dozen possibilities. And some projects already begun are in limbo, among them a proposed 21-story tower in Hollywood that would include retailers, apartments, and a hotel.

“It’s looking like we’re waiting to see what’s happening with the initiative and where the community’s at,” he said.

For Agora’s Kozloff, creating projects that pencil out is a matter of thinking creatively – such as converting an 80-year-old furniture warehouse in El Sereno into science labs and offices, so it can become part of a burgeoning bioscience corridor near Los Angeles County-USC Medical Center. Allan S. Glass of ASG Real Estate Inc. in downtown has partnered on the conversion project.

Another Kozloff strategy is not buying a full stake in a property until he knows how big he can build. After securing entitlements, he can then determine a fair value for the full site.

Landowners might have to wait for their payout, but later can reap as least as much as, if not more than, their asking price for unentitled land.

“It keeps us less exposed to potential swings in the value of the underlying land and it gives property owners the opportunity to get some proceeds out of their property,” Kozloff said. “It’s problem-solving and getting a lot of moving parts together.”