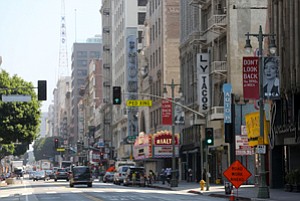 Acting Up: Stretch of Broadway that has drawn attention of apparel firms. Photo by Ringo Chiu.

Mainstream clothing brands and niche fashion lines are descending on Broadway, gradually turning the southern end of the corridor near Apple Inc.’s potential store into a hub for retailers who want a piece of downtown’s edgy allure.

Guess Inc., Nike Inc., and Adidas America Inc. are said to be in talks to pick up leases on Broadway, while J Crew Group Inc. and an H&M brand are scouting for space. Danish, German, and South Korean retailers are moving in, too, while French and Japanese companies are hunting for storefronts. The Broadway Trade Center, occupying nearly a full block across from Apple’s planned Tower Theatre site, plans to fill roughly 200,000 square feet with contemporary fashion designers. The newcomers would sit alongside fashionable boutiques such as Bnker and Acne Studios as well as outposts of clothiers Gap Inc. and Ross Stores Inc.

“You’re seeing people start to get it, and you’re going to start to see a lot of Broadway infill really quickly,” said Justin Weiss, a vice president at Kennedy Wilson Brokerage Group in Beverly Hills.

But still uncertain is whether enough retailers can pack Broadway with the density needed to transform the street into a high-end shopping zone that would attract Angelenos from farther afield.

“If you can get enough retailers in the same area, you can generate the foot traffic,” said retail consultant James Dion of Dionco Inc. in Chicago. “Either the spark is ignited and it’s amazing or it’s going to be a miserable failure.”

With rents low on Broadway compared with high-fashion streets in Venice or Beverly Hills, companies that jump in now could reap rewards if they can stomach the uncertainty, said Robert Cohen, Santa Monica-based vice chairman of New York real estate brokerage RKF.

“It takes a lot of vision, and a lot of guts, to launch in an area that is literally going through this dramatic transition,” he said. “It’s a great gamble.”

Read more about “Broadway’s Next Stage” in the July 4 issue of the Los Angeles Business Journal.