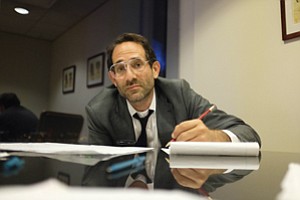 “I’m not going away,” insists Dov Charney, the ousted chief executive of American Apparel who saw the clothier slip out of his grasp in bankruptcy court last week.

Vowing to stay in the public eye, he told the Business Journal, “I can’t just be robbed like this and turn away.”

In fact, the 46-year-old entrepreneur could make a fresh mark as the creative force behind a new company, said Chad Hagan of Roswell, Ga.’s Hagan Capital Group, whose $300 million takeover bid for American Apparel was rejected by the company in bankruptcy proceedings.

But Charney declined to discuss the prospect of launching another company.

“I have no comment on what I’m planning to do,” he said, stressing his deep disappointment in losing the company that prided itself on L.A. manufacturing and social activism. Ever since American Apparel fired Charney in 2014 for alleged misconduct, he has battled fiercely to regain control.

In bankruptcy court recently, he told a judge that the company’s new management thwarted his multiple attempts to return to the business he founded 25 years ago.

“There was no chance I could ever have a fair shot,” Charney said in reportedly animated testimony, wearing a gray suit and white sneakers. “I’m a merchant, I’m a creative artist, I’m a photographer, I’m a marketer, I’m an industrialist.”

Judge Brandon Shannon appeared sympathetic to Charney’s devotion to the brand, but said the allegations of his wrongful firing did not factor into selecting the best way for American Apparel to exit bankruptcy, which it entered in October amid weak sales and heavy debt.

“I have no doubt that he wants only the best for American Apparel and especially for its thousands of employees,” Shannon said.

American Apparel’s reorganization will take the company private, wiping out the stock and leaving shareholders, including Charney, empty-handed.

Charney said he would not appeal.

According to bankruptcy attorney David Kupetz of downtown’s SulmeyerKupetz, an appeal would have little chance of succeeding since American Apparel’s major stakeholders had already vouched full support of the company’s plan to exit Chapter 11. Plus, stalling the restructuring plan would require Charney to post a bond worth millions of dollars to cover possible harm to the business.

Charney will have more days in court, however, both pursuing and fighting off lawsuits involving American Apparel. In a suit filed in June, he accused company officials and hedge fund New York’s Standard General of forcing him out of the company and reportedly sought $100 million in damages.

According to Hagan, the new venture with Charney, still unnamed, would manufacture clothes in Los Angeles to take advantage of the L.A. and Long Beach ports that can easily ship to Asia. It would also consider selling its creations in department stores rather than just its own shops. Furthermore, Hagan’s firm would partner Charney with “experts” who would steer the company’s growth.

“There are parts of his business that are probably more burdensome to him, that aren’t as exciting and inspirational as other parts,” Hagan said. “We would look to empower the artist.”

Hagan said the new brand would eventually seek to merge with American Apparel and possibly go public. But any growth would be carefully controlled, he said, aiming to avoid American Apparel’s missteps.

“Dov was really young when he founded the company,” Hagan said. The T-shirt brand then exploded in growth as it went from a basement operation to a manufacturer backed by hedge funds.

“We want to limit the shell shock that can go with these major changes, which can distract an individual like Dov who’s been so wrapped up in the company,” said Hagan.

“What he needs to do is what true entrepreneurs do – dust himself off and get back in the ring,” Greif said. “We’ll see if he has that in him.”

He doubted that Hagan, a firm lacking retail experience, would be an ideal partner. But he said it’s unlikely that many investors would want to team up with someone who lost his job after being accused of misusing company funds and sexually harassing employees.

“He is an entrepreneur with baggage,” Greif said.

A new company would need to be careful to not repeat American Apparel’s mistakes, he added, pointing to the company’s insistence on L.A. manufacturing as its downfall. Under American Apparel’s new leadership, Greif said he expects the company to move at least some of its production to less-expensive cities.

Another challenge for Charney would be reinventing himself in the competitive teen apparel market, an industry that rotates the latest fashions on and off store hangers at a breakneck pace.

“If he is creative and has the fashion sense that people have credited him with, he could certainly do it,” said Ira Kalb, an assistant professor of clinical marketing at USC’s Marshall School of Business.

But new designs would have to strongly stand out from American Apparel’s legion of multicolored T-shirts, leggings and dresses.

“When you’re the copy, you’re never as good as the original,” he said.

Bruce Dobb, chief executive of L.A. advisory firm Concerned Capital and who has worked with American Apparel in the past, said he expected the L.A. garment industry to be open to Charney’s latest efforts, especially if they were to generate new jobs.

“There’s always room for new entrants,” he said. “Isn’t L.A. the place where people reinvent themselves all the time?”