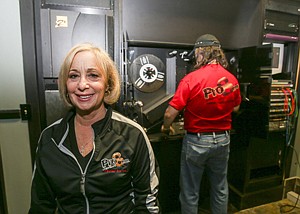 Looking Up: Rhonda Vigeant at Pro8mm, which has benefited from a surge in movies shot on film. Photo by Ringo Chiu.

The success of “The Hateful Eight” and “Star Wars: The Force Awakens” – both shot on old-style celluloid film to give those new movies a classic look – is prompting young filmmakers to turn back the clock and buck the established trend of shooting in digital.

The new trend toward old-school shooting makes a big difference for film developing labs such as Pro8mm, which said it has recently seen sales jump nearly 30 percent at its Burbank facility.

“We’ve been so busy over the last few weeks,” said Rhonda Vigeant, a co-owner of the lab. “I think some young filmmakers renewed their commitment to film after being inspired by movies such as the new ‘Star Wars’ and Quentin Tarantino’s ‘The Hateful Eight.’”

Young directors, some of whom are college students who never shot on film, have recently began inquiring about celluloid at Vigeant’s lab.

One of them is Mikhail Moldavskiy, 32, a film student at Los Angeles City College, who is planning to shoot his upcoming debut feature using a combination of Kodak 8 mm and 16 mm because it looks vintage and authentic.

“Directors like Tarantino are inspiring. He’s given film a necessary boost,” said Moldavskiy.

“Part of the reason I’m feeling this way is I can’t stand all this digital stuff. This is not what I signed up for,” Tarantino said in a speech at the 2014 American Film Market in Santa Monica.

Digital shooting and projection have been the norm for almost 40 years but Tarantino is such an evangelist for film that he screened his new western, “The Hateful Eight,” in old-fashioned 70 mm at 100 retrofitted theaters around the country at Christmas before it opened wider a week later on 2,500 screens showing it in digital.

Audiences responded better to the old-fashioned approach with the film earning an impressive $4.6 million in 70 mm on those 100 screens but then a disappointing $16.2 million in digital projection on 2,500 screens for the director’s lowest wide-opening figure since “Jackie Brown” back in 1997.

Meanwhile “The Force Awakens” – made on film just like the original “Star Wars” of 1977 – continues to obliterate box-office records and is on course to become the most successful movie ever, with U.S. gross of $750 million in its first three weeks of release.

But not everyone is convinced that film is making a comeback.

Norman Hollyn, director of film studies at USC’s School of Cinematic Arts, said film costs too much to become a trend.

“I don’t see this happening,” he said. “It’s too expensive.”

High costs have been a major factor pushing filmmakers away from celluloid. In fact, an 11-minute film, shot on Kodak 35 mm, might cost up to $8,000.

The price difference became especially apparent in 2002 when George Lucas shot “Star Wars: Episode II – Attack of the Clones” entirely in digital. He spent $16,000 producing 220 hours of footage on digital tape. But if he had decided to shoot his movie on celluloid, by some estimates, the cost would have skyrocketed to $1.8 million.

As the demand for celluloid dropped, Kodak Easton Co., a major film developer and manufacturer, filed for Chapter 11 bankruptcy after its revenue plunged 27 percent from $1.3 billion to $965 million in the first quarter of 2012.

In 2013, French-owned Technicolor Inc. closed its film lab in Glendale after the company lost its contract with Universal Studios.

A year later, Deluxe Laboratory, another major motion picture film-processing and printing facility, closed its doors due to “significant financial losses,” it said at the time. The last film lab in New York rolled up production and discarded all equipment in 2014.

Still, some directors, including Chazelle, argue that film can be economically viable if used properly.

He decided to shoot “La La Land,” which stars Ryan Gosling and Emma Stone as a musician and an actress falling in love, on film, unexpectedly enough, to save money.

“To make the film look as good as it looks, it would be more expensive on digital,” Chazelle said. “We would need to have a different camera and do tons of postproduction work.”

Chazelle said digital video proponents ignore the hidden costs, which emerge in postproduction such as data storage, coloring and logging.

While shooting on digital, filmmakers allow their cameras to run on and on because they think it’s free, but the lengthy footage turns into additional expenses later.

To ax costs, Chazelle and his team decided to simply shoot less.

“We didn’t have a tremendous amount of film,” said Chazelle, whose film will be released in July by Santa Monica’s Lions Gate Entertainment Co. “A lot of help comes from how much footage you need to do, how many stocks you need to buy. If you keep those economical, then the added cost is really low.”

Student filmmaker Moldavskiy came up with a different solution to keep costs low – he shops at stores that sell leftover film from big production studios for half-price.

Despite the naysayers, film most definitely hasn’t gone extinct.

It all means a lot of orders for labs such as Pro8mm. Rhonda Vigeant and her team there have been slammed with work since October with orders coming from as far as the East Coast.

This year, it appears orders will keep coming.

Several Hollywood blockbusters shot on Kodak film will be released this year, including “Batman v Superman: Dawn of Justice,” from Zack Snyder; the Coen brothers’ “Hail, Caesar!”; and “Suicide Squad,” from David Ayer.

Chazelle said he will be happy as long as filmmakers can choose from both options, digital and film.

“It’s not that film supporters are advocating the death of the digital,” he said. “The more options we have, the more colors of paint we have, the better.”