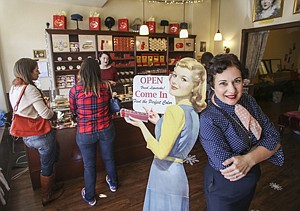 Gabriela Hernandez at Besame Cosmetics’ Burbank shop with a sign that points to the firm’s vintage style. Photo by Ringo Chiu.

The lipstick tubes made by Burbank’s Besame Cosmetics Inc. are shaped like gold bullets, but the company started off firing blanks.

The luxury makeup brand, whose name means “kiss me” in Spanish, developed a small cult following when it launched online 11 years ago, but it struggled to expand distribution outside of boutique shops.

The company has seen explosive growth over the past year, however, as sales have tripled. And it recently snagged distribution deals with Paris beauty chain Sephora and retailer Anthropologie, a subsidiary of Philadelphia’s Urban Outfitters Inc.

Gabriela Hernandez, Besame’s co-founder and chief executive, said it was an uphill battle in the early days as mainstream retailers dismissed the vintage-inspired cosmetics line as a novelty.

“People didn’t think we would last because it was just too out there, too much with a point of view,” Hernandez said. “It wasn’t general market enough.”

Besame’s products take their cue from old Hollywood glamour – from historically accurate lipstick shades down to packaging design. For example, its 1939 Red Hot Red lipstick is the same shade of red that was popular that year.

The company’s attention to design and color has made it a favorite among Hollywood makeup artists. Its products have coated the lips of musician Lady Gaga in television series “American Horror Story” and actor Eddie Redmayne, who wears Besame’s lipstick in transgender film “The Danish Girl.”

Besame products are designed and manufactured in Los Angeles by a contractor. Prices range from $20 for cream mascara to $68 for a 50 milliliter bottle of perfume. Lipstick retails for $22, pricey but not super expensive.

While the company’s vintage aesthetic might have fallen flat with retailers at first, shoppers are now spending more money on niche makeup brands with strong identities such as L.A. firms Ilia Beauty, known for natural and organic lip products, and RGB Cosmetics, which touts nail color free of carcinogens.

“These brands are really able to get that loyal, strong following,” Romanowski said. “So, it may not be a big group, but it’s a powerful group. Even Target and Wal-Mart are starting to carry these niche higher-end brands.”

Hernandez co-founded Besame in 2004 with her husband, Fergus, who is chief financial officer of the company, which has nine employees and retail stores in Burbank and Whittier.

Before launching her makeup line, Hernandez headed her own Burbank graphic design firm, which worked on marketing materials for clients including American Red Cross and United Way of America.

“It got to a point where I was doing more work for (Besame) than for my clients,” she said. “So I sold my practice.”

Hernandez tried to grow her business by pitching Besame to mass beauty chains including Sephora, but no one was interested.

She managed to get her product into New York luxury retailer Henri Bendel in 2007, but after two years on the shelves, her company was only breaking even due to costs associated with staffing and renting a counter space.

“Upscale retail is very costly to maintain and nobody tells you this when you go in,” she said. “You use it as a promotional thing but there’s not enough volume. I can understand the vanity aspect of it, but I need cash. I can’t run on vanity so we decided to pull out.”

The company stuck to selling its products online and at specialty shops as well as its own stores.

That all changed last year when Sephora contacted Besame to participate in a new program it created to promote eight to 10 under-the-radar brands each month to help consumers discover the hottest new labels. Most of the niche beauty brands are sold online but some, such as Besame, are available in stores.

Hernandez said its products were a hit with shoppers and Sephora expanded its relationship with the cosmetics label and should carry most of the company’s collection by March.

The firm’s makeup can also be found at about 15 Anthropologie stores, including the Santa Monica and Beverly Hills locations.

Romanowski said retailers are changing their attitudes toward beauty products in accordance with consumer demand – a move benefiting smaller players such as Besame.

“Niche brands that maybe nobody would have heard of before are now becoming mainstream,” she said. “We’re seeing even Sephora start carrying brands like AmorePacific, which is owned by Shiseido. It’s interesting. There’s this desire to get brands that are hard to find.”

Shoppers can expect a host of new lipstick and eyeshadow colors to be released this year, said Hernandez, who projects sales to hit about $4 million in 2016 due to Besame’s expanded distribution channels and new products.