A few years ago, buying a beer at the 17,000-square-foot Traction Avenue home of Crazy Gideon’s Electronics in downtown L.A.’s Arts District would have seemed, well, crazy. 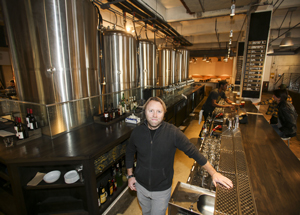 “Some neighbors say, ‘I remember buying my VCR here,’” said brewery owner Eric Needleman of the store made famous in local TV commercials.

But now Needleman and his business partner have rented out the space from its wacky owner and repurposed it for a type of business taking the neighborhood by storm.

The mammoth space reopened last month as Arts District Brewery Co. – a brewing facility, restaurant and pub backed by Needleman and Cedd Moses, two of the key forces behind Seven Grand, the Varnish, Tony’s and about a dozen cocktail bars throughout the L.A. area.

This represents a new venture for the pair, as evidenced by six steel tanks installed at the center of the building.

“We saw beer sales skewing toward craft and that was a light bulb moment,” Needleman said on a recent afternoon at the brewery.

By the end of this year, the Arts District will be home to five breweries, all within a one-mile radius. In addition to Arts District Brewery and Angel City Brewery, which pioneered the area’s beer scene when it opened in 2013, Mumford Brewing Co. calls a spot on East Third Street home and Boomtown Brewery sits not far away on Jackson Street. A little farther to the south, Iron Triangle Brewing Co., which reportedly has plans to become L.A.’s largest craft brewer, will occupy a 40,000-square-foot space when it opens this year. Meanwhile, Indie Brewing Co. and Dry River Brewing have staked out locations across the river in Boyle Heights.

In fact, the number of breweries in the Arts District now exceeds that of Torrance, which is often thought of as L.A.’s craft beer hub.

Despite the influx, brewers such as Needleman have welcomed rather than fretted about the growing number of competitors.

“We’re all very different, but we’re all in the same boat,” he said, as an afternoon crowd trickled into the brewery to play skee ball and sample one or more of the 12 beers brewed on site.

While there are now more than 40 breweries in Los Angeles County – a number that’s more than doubled since January 2014 – the local industry still lags far behind the robust San Diego County brewing scene in terms of revenue.

But the number of new breweries bubbling up signifies that Los Angeles is picking up steam.

The city of Torrance, which years ago streamlined the conditional-use permitting process to attract breweries, has historically been at the forefront of the trend.

David Hadley, assemblyman for the 66th District, said in a June press release that opening a brewery in Torrance takes approximately 12 weeks and $3,800 in permit fees, compared with 12 months and a minimum of $6,500 in the city of Los Angeles.

Brewery operators in both cities cited a number of reasons for the shift to Los Angeles.

For starters, the emergence of trendy restaurants and bars downtown has attracted a younger and hipper demographic. A slew of large industrial spaces, often cheaper per square foot than smaller properties, have also been put on the market. Public transit options into the area have improved as well, and many brewery owners are nearing the end of L.A.’s nettlesome permitting process.

So far, new entrants to the downtown brewery cluster have bolstered business for everyone else rather than siphon customers away.

“The scene feeds off itself,” said Todd Mumford, co-owner of Mumford Brewing, which intends to make approximately 1,000 barrels of craft beer this year. “By having multiple breweries that are walkable, they kind of reinforce each other.”

Keith Ely, assistant manager of Angel City, said increased foot traffic in the neighborhood has spurred growth at the brewery.

“I think this helps put us on the map,” he said.

That belief was reiterated by Bart Watson, chief economist for the Brewers Association in Denver, who said that he has observed new breweries create more opportunities for others in the same area.

“When one moves in it creates a virtuous cycle,” he said.

But even though competition might not be a concern now, Watson said breweries must continue to distinguish their products over the long term in order to stand out in a high-density area such as downtown.

“If there was a winning formula, it’d be to hyperlocalize your brewery,” said Frances Lopez, executive director of the Los Angeles County Brewers Guild, adding that some local breweries have been greatly served by tacking a restaurant onto their business.

Another part of the challenge for breweries that have distribution operations in addition to tasting rooms, she added, would be figuring out how to be assertive in landing their beer on store shelves and staying in tap rotations in a market where companies such as Anheuser-Busch Co. Inc. still dominate.

Still, the craft beer industry, which grew by nearly 20 percent nationally in 2014, is generating a lot of buzz among consumers.

Arts District Brewery, for example, has already garnered more social media traction than any of the other bars operated by 213 Hospitality and the Spirited Group, according to Needleman.

“We’ve put a lot of blood, sweat and tears in this space and we’re really proud of it,” he said. “The response has been fantastic.”