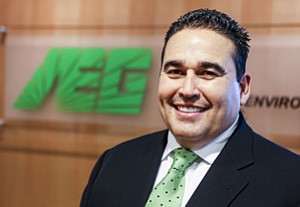 After spending 10 years and $25 million to develop a cost-effective option for ships to plug into a seaport’s electrical power, a process called cold-ironing, Advanced won approval in October from the California Air Resources Board to sell its emissions-capture system for container ships.

And more good news could arrive with the new year for Advanced, as the same board is considering approving its system for other ships such as oil tankers – a hint that those ships might soon also be similarly regulated.

He added, “It’s gone full circle from a shipping captain who said (years ago) to me, ‘I like you and you’re a nice guy, but you’ll never put that thing on my (exhaust) stack.’ Now there are regulations in place and there’s pain out there. And these companies are trying to figure out how to comply and that’s a lot of opportunity.”

His company’s recently approved method, the Advanced Maritime Emissions Control System, helps container ships comply with the air board’s mandate that ships’ auxiliary diesel engines emit only minimal pollutants while docked at California seaports. Ships could also use huge electric plug-ins from the shore, but that requires they first undergo a costly retrofit.

Garcia started Advanced in 1992 as an environmental cleanup business degassing giant storage tanks on ships and barges of toxic vapors, cleaning out internal combustion engines and scrubbing saltwater tanks to minimize odors for the freight, chemical and oil movers – trucking and railroad companies and shipping lines.

In 2003, Garcia saw regulations coming that aimed to reduce emissions from freight-moving vehicles. He began altering his technology to suck out and clean the emissions from exhaust stacks on ocean ships, whose diesel engines idle for hours, even days, as they berth at San Pedro and other ports.

“I saw regulations were going to be tough,” Garcia said. “We said, Let’s see if we can attack this and come up with technology to capture emissions from ships and locomotives.”

Two years later, Advanced began testing its bonnetlike device on ships at the Port of Long Beach, lowered by giant cranes over exhaust stacks. Scrubbers clean particulate matter inside the stacks while powerful vacuums suck out other emissions.

But in the middle of its testing period, Advanced took a detour to answer a call for help from Placer County, where residents complained of pollution from Union Pacific Corp.’s Roseville Rail Yard. Advanced adapted its technology and in 2006, demonstrated to several state and local environmental agencies, rail lines and residents that its system captured most key pollutants from idling locomotives. But the effort didn’t generate any business for the company.

“Union Pacific wasn’t going to give us a purchase order,” he said. “It was so disappointing – so much work went into that demonstration.”

But just as Advanced returned to the Port of Long Beach to refocus on ships in 2007, the air board implemented its At-Berth Regulation, which requires idling container ships to either plug in to shore power or use a technology like that of Advanced, opening the door for Garcia.

The detour Garcia and Advanced had taken was beneficial in the long term. The successful demonstration, albeit on a locomotive, impressed state pollution control agencies and shipping lines, making it easier to get recognition, funding – such as a $2 million subsidy from the Port of Long Beach – and potential customers, such as Mediterranean Shipping Co., to try out Advanced’s technology.

In 2014, Garcia applied to the air board to begin the approval process for the Advanced technology and was approved this fall. The board is reviewing the system for all other seafaring ships at the ports, such as oil tankers.

Garcia is confident he’ll be able to grab significant market share with shipping lines. He said that he’s got contracts with two and others are in the pipeline, and the barge hosting Advanced’s system is already 73 percent booked for the year. He’s seeking financing to expand to four barges, and he plans to hire three engineers and possibly 80 to 100 more once the new barges are up and running.

His company’s system costs ships $1,000 to $1,500 an hour, which adds up as container ships park at the twin ports a minimum of two days, according to the air board.

Advanced is not without competitors. San Pedro’s Clean Air Engineering-Maritime Inc. received approval by the air board in June to operate its emissions control system on one container ship’s exhaust stack.

Advanced was approved to operate its system on up to two exhaust stacks at once, which Garcia said is important as container ships increase in size.

Ships can avoid services from Advanced and Clean Air Engineering by plugging in to electric power at the ports. However, retrofitting a container ship to do so costs between $500,000 and $1 million, according to the air board.

Of course, that’s an advantage for Advanced and companies like it, said James Fawcett, director of USC’s Sea Grant Program and a marine environmental policy expert.

“The market share of this company is likely going to be a function of port calls by carriers using older container ships because they won’t go to the trouble of retrofitting,” Fawcett said.

“I think there will be a market for this in the foreseeable future,” Fawcett said. “There are too many variables to think that this is a one-shot deal.”

Ultimately, however, Fawcett thinks shipping lines and seaports globally will shift to cold-ironing, which may reduce the need for the Advanced technology.

Garcia has thought of that possibility as well. He’s developing a system that can be permanently installed inside new ships, making them even more flexible.

Looking back over the last decade, Garcia said he worried about getting customers, needed regulations or if something newer would replace his technology.

“I’m really glad we didn’t give up even though there were times I just couldn’t talk about it at the dinner table anymore,” Garcia said. “It’s just been a difficult journey.”