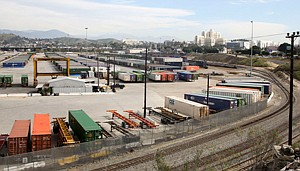 For years, developers looked at a 125-acre rail yard in Lincoln Heights and saw possibility.

Now, the vast property known as Piggyback Yard is a key part of an ambitious billion-dollar plan to revitalize the Los Angeles River north of downtown.

But for interested parties who study the spot – estimated to be the largest property owned by a single entity in Los Angeles – there is one looming issue: The rail yard is not for sale.

“Union Pacific has been clear that we have no plans to relocate or sell the property,” said Francisco Castillo, a spokesman for Union Pacific Railroad of Omaha, Neb., which owns the land. In fact, the rail yard operates at near capacity as one of the company’s principal hubs for domestic cargo shipments.

Still, the site has many attributes that developers crave. For starters, it sits less than a mile from flourishing entertainment scenes such as the Arts District and the rest of downtown Los Angeles, though it’s far enough away to feel like a secluded oasis along the river. It’s also well-served by public transportation, including multiple subway and train lines at nearby Union Station. And its colossal size easily lends itself to big, bold ideas.

“It’s a unique site,” said Shelly Backlar, vice president of programs at Friends of the Los Angeles River, a nonprofit that advocates for restoration of the river. “Anyone who is planning a big revitalization effort, whether it’s housing, Olympics or for the river, has to consider that an opportunity site because of its proximity to downtown L.A. and because of the site’s scale.”

As such, the property, which is estimated to be worth north of $650 million, has consistently piqued interest.

The Los Angeles Football Club recently eyed the land as a potential home for a Major League Soccer stadium, while the Los Angeles 2024 Olympic Bid Committee also considered the site as a possible home for the Olympic Village.

“It was an attractive possibility,” said Jeff Millman, a spokesman for the LA 2024 committee, which originally included the property in its Olympic bid package.

That $1 billion proposal, as well as a separate plan for a soccer stadium, were both scrapped.

In situations similar to this, governments can take land by eminent domain. However, the city says it doesn’t want to try eminent domain. That means a buyer might have to offer a can’t-turn-it-down price – but that would be steep.

“You initially believe, Oh, yeah, that’s gettable. Then you find out it’s a working rail yard for one of the biggest rail companies in the country and you’d have to replace what they have, and replace the infrastructure or build on top of it,” said Tom Penn, co-owner of Los Angeles Football Club and a former National Basketball Association executive, adding that the team’s co-owners nixed the site before entering into any negotiations with Union Pacific. The club’s stadium will ultimately be built where the Los Angeles Sports Arena stands.

But despite the logistical hurdles of acquiring the land, the Friends of the River and city officials are confident that their own plan for Piggyback Yard, which was incorporated into a $1 billion Army Corps of Engineers river revitalization project that received initial federal approval in 2014, will ultimately move forward.

“I think it’s persistence,” said Barbara Romero, deputy mayor for city services in Los Angeles. “Our goal is to work with the landowner to figure out a path forward in our restoration efforts.”

The Army Corps’ plan would divert the river’s flow into channels, widen tributaries and remove concrete from the river bed along an 11-mile stretch. Much of the natural habitat would be restored, while wetlands and pathways would be added. Piggyback Yard lies at the plan’s heart.

“We pretty much did everything without ever stepping foot on the property,” said Leigh Christy, an architect at the L.A. office of Perkins + Will, who helped sketch a blueprint for the site using historical maps, GIS data as well as views of the rail yard from the Caesar Chavez Bridge and atop a nearby parking structure.

Costs for the project, which analysts believe could attract up to $5.7 billion in commercial and residential development to the area, would be divvied up between local and federal governments if the plan receives congressional approval.

However, even if the overall revitalization project is authorized, the detailed vision for Piggyback Yard itself could be dropped due to costs and uncertainty over whether Union Pacific would agree to sell. Because the land’s steep price tag is included in the $1 billion total, the final project figure could wind up changing.

In a letter to the city of Los Angeles in 2014, Union Pacific Chairman Jack Koraleski reiterated that the company had no plans to relocate or close its facility. He did, however, suggest that an agreement could theoretically be worked out.

“It is possible that a sale or exchange agreement could be reached, but only if, on terms acceptable to Union Pacific management in its sole discretion. To this end, the city would acquire, in cooperation with Union Pacific, a suitable replacement facility with all necessary permits and approvals for Union Pacific’s exclusive use,” Koraleski wrote.

Backlar said she understands Union Pacific’s general reluctance. It would be akin to someone coming into your kitchen and announcing a fantastic new plan for your house.

But many, including Backlar, are banking on the parcel.

“There’s an energy there. You can’t deny that,” said Mia Lehrer, principal architect at Mia Lehrer + Associates, whose Koreatown firm was also involved in conceptual designs for the revitalization project. “The chances are that they know they have an amazing site and are just waiting for the right moment.”