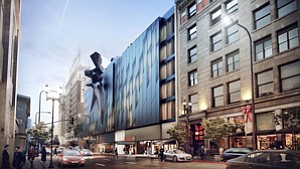 Tom Gilmore is at it again.

The same developer who ignited downtown L.A.’s revitalization efforts about 15 years ago is about to begin construction on his most ambitious project – an elaborate contemporary art museum that will weave in and out of multiple buildings.

To be named the Main Museum of Los Angeles Art, it will be in the Old Bank District, the neighborhood where Gilmore long ago snapped up several historic buildings and later transformed them into downtown lofts.

Construction on the first of five phases is slated to begin within the next month and a half, he said. But it could take up to four years to complete his entire 45,000-square-foot museum and 30,000-square-foot rooftop sculpture garden. He estimates the whole project will cost about $55 million to build.

Art enthusiast Gilmore has long dreamed of building his own museum and the focus of this one will be on local artists and L.A.’s contribution to the world of art.

“The timing just seemed right for it,” he said. “We thought we could change how the buildings here were being used.”

Meantime, Gilmore just put two nearby properties – the San Fernando and Continental buildings – on the market last week. Both historic properties, which are among those he redeveloped into lofts, are expected to play into his grand vision because one is to be a boutique hotel – giving museum visitors a place to stay.

What’s more, three other buildings in the neighborhood that aren’t owned by Gilmore are also listed for sale, according to Fred Cordova, an executive vice president at Beverly Hills brokerage Kennedy Wilson who’s listing both of Gilmore’s properties. The vision is to sell those buildings to boutique hotel operators or convert them to lofts or creative office space, Cordova said.

“The concept behind the museum is to provide a real reason for the Old Bank District neighborhood to have cachet,” he said. “What they’re doing now is looking at their other buildings to be connected to it.”

Gilmore and his business partners formed Gilmore Associates in 1998 to buy and renovate downtown historic buildings that had long been abandoned.

The company later became the first developer to use L.A.’s adaptive reuse ordinance, which expedites the approval process for projects aiming to convert the city’s older and obsolete buildings into new housing units.

Today, Gilmore Associates is considered the catalyst that prompted the flurry of residential development downtown that began in the early 2000s.

The firm’s first undertaking was the San Fernando building at 400 S. Main St., originally constructed in 1907. It reopened in 2000 with 70 loft-style apartments, but the company is now looking for a buyer that can take the property to the next level.

“They redeveloped it in such a way that today would be construed as very Spartan,” Cordova said. “The rooms are not elaborate because they didn’t know what kind of rent they would get and they didn’t know how people would respond to it.”

The 12-story Continental building – downtown L.A.’s first skyscraper, built in 1904 – now has 56 lofts. But Cordova said the plan is sell it to a boutique hotel company.

One primary reason Tom Gilmore has put the buildings up for sale is to retire two of his business partners, Fred Cowan and Carlo Beccaria, who are both in their 90s. His other partner, Jerri Perrone, plans to remain involved with the revitalization effort.

Gilmore Associates will maintain ownership of the historic Farmers and Merchants National Bank building, the Hellman building next door and the Bankhouse Garage next to it, all of which will be included in the Main Museum.

Designed by L.A. architect Tom Wiscombe, the museum is slated to have two entrances – one on Main Street and the other on Fourth Street.

The primary entrance, on Fourth Street, will guide visitors through the Hellman building’s foyer and into the Farmers and Merchants building, which will boast multiple levels of contemporary art galleries as well as a restaurant and lounge.

The entryway itself will be about 14,000 square feet, Gilmore said, adding that he expects to finish construction by the end of this year.

The second phase will include construction under the buildings, where turn-of-the-century bank vaults and other historic features will be displayed within vast basement and sub-basement spaces.

“The biggest bang of the museum actually occurs on the roof,” he said.

Indeed, a futuristic sculpture garden – plus a promenade, café and amphitheater – will sit atop the Bankhouse Garage.

The Hellman building, which Gilmore previously converted into 104 lofts with retail and restaurants at the ground level, will continue to house its residents and existing businesses, he said, but the revenues won’t be combined with the nonprofit museum.

Profits from the café planned for the Bankhouse Garage rooftop, however, will help fund the museum. Ultimately, the Main Museum will be a separate, nonprofit entity from Gilmore Associates, he said.

The ultimate goal, he said, is to provide a place for L.A. artists to showcase their work without having to worry about being driven out by commerce.

“I wouldn’t call it losing money, but we expect to be a part of the support for it on an ongoing basis,” Gilmore said, adding that the nonprofit will also raise money through donations.

Gilmore has already hired Allison Agsten, who formerly served as the curator of public engagement at UCLA’s Hammer Museum in Westwood, as director of the Main Museum. She will be in charge of organizing the revolving art exhibits, he said.

Gilmore’s unorthodox vision won’t be without its challenges though, said Jerry Neuman, a partner in the downtown L.A. office of law firm Liner who’s familiar with the project but not involved in it.

“They have to ensure the buildings are capable of sustaining the types of uses they’re looking to do, in terms of structural stability,” said Neuman, who specializes in real estate and land use. “They’re trying new things and anytime you do that, getting through the building and safety process is tough.”

Even so, Neuman said he’s confident Gilmore can pull it off.

“It’s both very achievable and necessary for this area,” he said. “The idea of bringing a museum that focuses on local artists and looks at Los Angeles and its contribution to the world of art is really an amazing thing.”

Meantime, at least three other buildings in the neighborhood are listed for sale, including the H.W. Hellman and Title Insurance buildings and the Barclay Hotel.

Kennedy Wilson’s Cordova is the primary leasing agent for the H.W. Hellman building, which might be better known today as the Banco Popular building, at 354 S. Spring St.

Developer Allen Gross owns that building and has announced plans to build 188 apartment units and a rooftop pool. That plan, however, is far from chiseled in stone.

“He’s moving forward with his multifamily project. However, we are talking to several hospitality users who might come in and take that space instead,” Cordova said. “It is for sale, but Allen would sell it for the right price to a hotel group.”

The oldest L.A. hotel in continuous operation, the Barclay at 103 W. Fourth St., has also been listed for sale.

Similarly, the Title Insurance Building at 433 S. Spring is available for sale, too. Cordova, who isn’t listing that one, anticipates it could be used for a hotel, residential units or creative office space.

“You have an incredible reinvigoration going on, and you’re going to have properties right now that I would say are going to triple or quadruple in value,” Cordova said. “Three years from now, the Old Bank District will be on fire.”