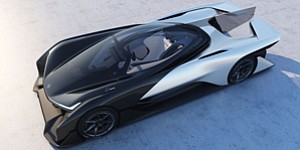 Nevada State Treasurer Dan Swartz said he is growing concerned whether Faraday Future or its billionaire backer, Jia Yueting, will put up the money needed for the company’s $1 billion electric car factory in North Las Vegas.

Faraday, based in Gardena, did not return telephone inquiries.

After returning from a trip to China last week, Swartz said several individuals there told him that Jia and Leshi did not have the money to fund the project, although he did not talk with Jia directly.

“I spoke with several members of the Chinese corporate and financial communities who are familiar with and know Leshi and Mr. Jia,” said Swartz. “What they all agreed on is he doesn’t have the money.”

Schwartz said that he wants the project to succeed and has arranged a meeting with Faraday Future executives this week to discuss the issue.

Faraday plans to build a Telsa-like electric car in a new plant in North Las Vegas. Nevada is offering $217 million worth of incentives including the infrastructure – roads, a rail line, water pipes and the like – for the new industrial site. Faraday is to pay for the $1 billion plant. The state wants the $70 million from Faraday as security in case something goes wrong.

Faraday Future is a subsidiary of Beijing’s Leshi Internet Information & Technology Corp., founded by Jia. Faraday is led by Ding Lei, head of Leshi Super Electric Car Co., several insiders told the Business Journal last month. The company has publicly committed to selling its first electric car next year, though it has yet to show a functioning prototype or complete its factory.

A large portion of Jia’s wealth reportedly is tied up in shares of Leshi. However, trading of Leshi’s stock stopped on Dec. 4 for a corporate restructuring, which was to transfer a controlling stake of Leshi Movie, a sister movie-streaming company, to Leshi. Trading was supposed to resume no later than Jan. 5, but has remained halted.

His concern grew further after he made a personal trip to China where he says he met with undisclosed people who he said were familiar with the finances of Jia and Leshi.

However, Leshi reported net income of about $56 million on revenue of about $1.05 billion in 2014, according to financial filings. The company had $392 million in long-term debt and $550 million in cash and cash equivalents in 2014. Financials after the third quarter of last year were not available. When Leshi’s stock stopped trading more than two months ago, the company reported a market cap of about $16.8 billion.

“My independent read of Leshi itself doesn’t lead me to believe they have financial problems,” said Aarin Yu, managing partner of Heritage Financial Partners in Culver City, who reviewed Leshi’s third quarter financial report for the Business Journal. “They do have a reasonably high level of debt. I think they are able to service it fine, but whether they are able to take on a huge amount of loans the answer is probably yes, but at a much higher rate.”

“Our office and frankly (Swartz’s) office aren’t financial analysts. We are not auto -industry analysts,” he said. “There is a range of outcomes that are possible with Faraday or frankly any other company that we bring to Nevada to help them grow.”

Taxpayers should be wholly protected from any fallout, so long as Faraday could put up roughly $70 million needed to securitize the state’s general obligation bonds, said Hill. The state of Nevada and Faraday Future are currently in discussions about the terms of those bonds and the results of those talks would be made public, he said. The general obligation bonds will likely be issued in September or October, said Hill. He did not say if there is a deadline for the state to receive the $70 million or whether that deadline has passed.

A spokeswoman for the office Nevada Gov. Brian Sandoval did not have a comment on Faraday Future’s financial health or the state’s incentives package.

But at least some others are concerned.

Hansen said that he would like the project to succeed, but is skeptical given the circumstances surrounding the project. He also said he doesn’t think Faraday Future compares to Tesla Motors Inc. of San Carlos, which the state of Nevada gave a $1.3 billion incentives package to build a battery factory outside Reno in 2014.