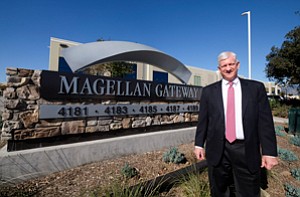 China Fisheries North America Inc. needed a place to store its imported seafood but wanted something more: an investment.

The Pasadena-based subsidiary of a giant Chinese seafood company spent $4 million in 2015 on a 50,000-square-foot warehouse in Montebello with freezer and cooler space, paying not only for room to stock tuna, shrimp, and cuttlefish but also for a chance to hook a growing investment trend.

“By studying the trends in the real estate market, we think, at that time last year, that the value of the property still had potential to go up,” said company spokesman Basten Liu.

L.A.’s industrial sector might be on the cusp of the next wave of Chinese investment, following the billions of dollars its investors have pumped into glitzier property types, especially hotels and multifamily developments. Warehouses might be comparatively bland but investors are beginning to see them as gems of long-term hold investment strategies.

“It hasn’t been until more recently that they’ve changed their focus to industrial,” Barbara Emmons, vice chairman of CBRE Group Inc., said of Chinese investors. “It would be false to say there’s tons of deals going on but there is tons of interest.”

Emmons said she saw the depth of that interest at recent investor conferences in Hong Kong and Singapore, which were buzzing with talk about L.A.’s industrial real estate. Chinese investors were concerned that by focusing on hotels they were missing the boat on logistics properties.

Chinese companies spent more than $2 billion on industrial property nationwide between 2010 and 2015, according to a study by the Rosen Consulting Group and the Asia Society, accounting for 10 percent of the total commercial transactions in that period. The activity was led by two major deals struck in 2015 by Chinese insurers, including one that gave China Life Insurance $150.5 million worth of industrial property in Los Angeles, according to Real Capital Analytics.

Still uncertain is whether the pace of China-driven industrial acquisitions will quicken, especially as interest rates rise. Johnson Chien, director of industrial services in Newmark Grubb Knight Frank’s City of Industry office, said investors might sit back a while to watch where prices land before getting back in the game.

“The first three months of (2017) will be somewhat quiet,” he said. “I do believe that there will be some activity after the first quarter … because people still need to deploy their money.”

Real estate in major U.S. cities began proving itself the darling of Chinese investors around 2010, when global economies were rebounding from the recession. As those investors looked for safe investments overseas, the U.S. real estate market began looking increasingly stable and able to deliver long-term profits, particularly multifamily and hotel properties. Investors also appreciated the chance to get on a fast-track for green cards by investing heavily through the EB-5 Immigrant Investor Program.

Between 2010 and 2015, Chinese investors sunk at least $17.1 billion into U.S. commercial acquisitions, according to the Asia Society study. That reflected an annual growth rate of 70 percent.

The investment boom has been particularly noticeable in Los Angeles, where Chinese companies are at work building massive towers and complexes. Greenland USA is spending $770 million on Metropolis in downtown, for example, while Dalian Wanda Group is pouring $1.2 billion into One Beverly Hills. City Century, owned by Chinese firm ShengLong Group, announced plans last month to build Olympia, a three-tower project downtown, at an estimated cost of $1 billion.

There is reason to believe investment will stay at high levels, given the number of rich power players trying to divert money from China’s volatile economy. The country’s currency has been slipping for almost two years, with its value now pegged at nearly 7 yuan to a dollar. There is worry that the value could drop further by the end of next year, hitting 8 yuan to a dollar.

“Investors, if they have the means, will definitely try to invest in the states,” Newmark Grubb’s Chien said. “They want their money to be in a safe haven.”

Industrial real estate is looking more than safe lately. L.A.’s industrial vacancy rate shrunk to 0.9 percent last year from 3.3 percent in 2010, according to Newmark Grubb. As a result of that demand, average industrial prices jumped 58 percent in the last five years, with rents climbing nearly 33 percent.

Investors can collect that cash flow with relatively little effort.

“They started to notice that this type of property is less headache, decent return,” Chien said. “They had the money, they wanted to buy. It’s just one of the ways to diversify their portfolios.”

Ping An Insurance Co. announced in October 2015 that it would buy $600 million worth of logistics assets nationwide in a venture with Blumberg Investment Partners, a fund connected to Denver-based Black Creek Group, although without plans to enter the L.A. market. The companies said they plan to eventually invest an additional $400 million.

Import and export companies such as China Fisheries are also biting into L.A.’s industrial stock as they aim to streamline operations.

Stephen Cheung, president of World Trade Center Los Angeles, said such a move can help companies cut back on costs as they grow.

“A lot of them are looking to make their supply chain much more efficient,” Cheung said. “Instead of needing a third party to store their products, they get to control the timing.”

Many of these import-export companies have clustered in the San Gabriel Valley, close to the neighborhoods that are home to Chinese and Chinese-American families but not too far from the ports. Rick Sheckter, an executive managing director at Newmark Grubb, estimated that about 80 percent of the industrial stock in the submarket was owned by Chinese and Chinese-Americans.

“They’ve moved up the ladder in terms of taking up more significant space,” he said.

Increased interest from Chinese companies is pushing local developers to cater to them as potential buyers. Century City developer Magellan Group even hired a feng shui consultant when designing five Class A warehouses at its Magellan Gateway in El Monte.

“If you’re respectful to the culture, I think that’s probably appreciated,” said Kevin Staley, a Magellan co-founder. “We knew that in the market there were a number of Chinese investors interested in buying. The economy in China has grown tremendously in recent years and Southern California has been very attractive.”

But even if Chinese companies are flush with cash, they might still struggle to pull that money out of China. The government has clamped down on allowing capital out of the country as more and more investors take resources abroad. It’s unclear how draconian its next regulations could be.

“Depending on how nervous they are, and if they are going to go through another economic hiccup, they could act immediately or use it as a threat to slow things down,” said Cheung.

One thing that’s certain is that the competition for industrial property is not likely to ease up, said Chris Tolles, a director at Cushman & Wakefield, who is marketing Magellan’s El Monte project. The competition stems not just from Chinese companies, but from large U.S. investors, too.

“There’s rising demand across the board from Fortune 500 companies to small Chinese mom-and-pops,” he said. “Everyone wants to own industrial in the L.A. area.”