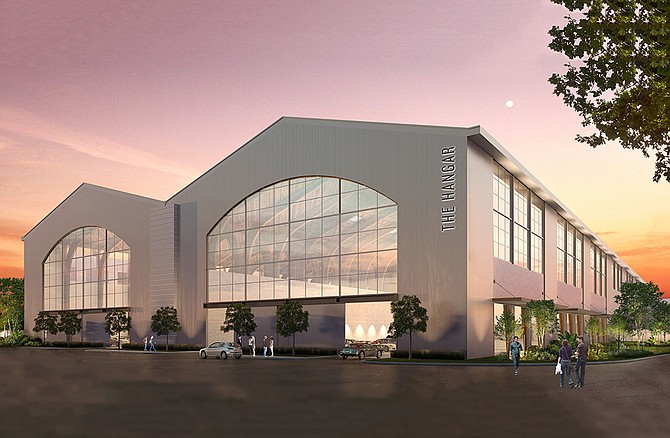 Rendering of the renovated offices courtesy of HFF.

The 1940s-era Spruce Goose hangar in Playa Vista sold last week for close to $270 million, on par with the values of modern office campuses that have recently traded in the trendy market.

Although the structure is an unfinished shell, unlike most similarly priced office buildings in the area, it has a high-profile tenant in Google, which is renovating the property.

The price for the hangar and several surrounding buildings, which wasn’t provided when the sale was announced, has since become available through a deed filed with the L.A. County’s Registrar/Recorder’s Office. The document filed Thursday lists the buyer as Alkema Magnvs Lap LLC.

“It's a long-term, cash-flow play,” HFF Director John Crump said last week. “With the world-renowned tenant that we have there, there was interest from all parts of the globe.”

The buyer was represented by EGW Asset Management Inc., a real estate services firm based in Tokyo, according to the press release. The Los Angeles Times reported that the buyer’s parent company is ASO Group, citing an unnamed source. Based in Iizuka, Japan, the company operates subsidiaries in the fields of infrastructure, environmental services, healthcare, and education.

Representatives at Ratkovich and Penwood did not respond to requests for comment last week.

The deal for the hangar and side buildings translates to $754 a square foot, on par with recent Playa Vista trades that valued Class A offices at prices ranging from $740 to $840 a square foot.

Real estate experts had been hesitant to gauge the value of the Spruce Goose hangar ahead of its sale, uncertain of how to quantify the worth of an empty shell made of layers of glued wood. The building contains two sections measuring 750 feet by 100 feet under a roof peaking at 72 feet.

Aviator Howard Hughes built the site in the 1940s to house his 200-ton cargo plane, Hercules, which was nicknamed the “Spruce Goose” despite being built mostly of birch. By the 1990s, the site became a Hollywood soundstage, hosting blockbusters including “Titanic” and “Avatar.”

Ratkovich nabbed the property in 2010 when it purchased 28 acres of Howard Hughes’ former offices for $34.2 million.

Google is now at work on renovations that will eventually create 418,600 square feet of office space on three floors and a mezzanine, according to HFF’s marketing materials, bulking up from 251,674 square feet. The other buildings in Google's lease, which sold as part of Hercules Campus West, offer an extra 56,487 square feet and are not set to be expanded.

Google has the option to buy the hangar at the end of its lease, which is good for 16 years with three five-year options to renew. The tech giant also owns 12 acres of land next door, purchased but has not yet announced development plans.