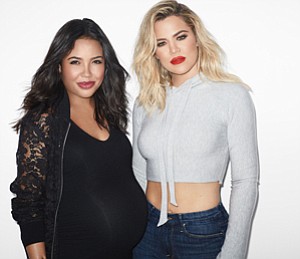 Los Angeles is a haven for denim labels, and one newly launched brand is already breaking the mold.

Good American, co-founded by fashion and marketing executive Emma Grede and reality TV star Khloe Kardashian, started its denim label two months ago – hitting $1 million in sales on its first day, according to the company – and is already gearing up for more denim styles and an expanded product offering in the new year.

Grede, chief executive of Good American, said the idea was to launch a line embracing the body type of all women, regardless of size and shape.

“Good American offers a premium denim line in a full size range without the plus-size label,” she said in an email. “Everything is made in L.A. as well, which we’re particularly proud of.”

The line launched with skinny, boyfriend, and high-waisted skinny denim styles in sizes 00 to 24. Prices range from $149 to $215.

Many premium denim labels offer styles for curvy women, but Grede said its label stands out because of the quality of its materials and shape. The company’s jeans also feature a four-piece waistband offering additional stretch that contours the body.

Kardashian said when she heard about Grede’s idea for the line, after an introduction through her mom, Kris Jenner, she knew it was a project she needed to join.

“I used to have such a hard time finding a pair of jeans that fit my body,” Kardashian said in an email. “And even after buying designer denim I would have to pay for additional tailoring. I thought, if I’m having these issues, other women must be, too.”

The company began selling bands for Apple Watches and said it would donate a year of solar-powered electric lighting to a person in need with each purchase.

Blake Mycoskie, founder of Toms, said the company loves the idea of products used on a daily basis that allow customers to give.

“With our new Toms for Apple Watch band, we will not only help provide light, but we will be positively impacting education, economic opportunity, health, and safety for so many people who desperately need it,” Mycoskie said in a statement.

The brand partnered with nonprofit Solar Sister in Providence, R.I., and SolarAid in London, which both provide solar-powered lighting to impoverished families in countries such as Uganda and Tanzania.

Access to artificial light allows children to have extra time to study and adults to work additional hours, earning extra income. It also eliminates the need to use kerosene or paraffin lamps, according to SolarAid.

Retail giant Target Corp. announced this month that it will be opening its flexible-format stores next year in Burbank and Koreatown, and at USC. The design allows for stores in smaller locations with products tailored to the local community. … Santa Monica luxury label NakedCashmere launched its first travel-inspired collection, Naked Voyage, this month in partnership with Erica Pelosini, Vogue contributor and editor-at-large for L’Officiel Paris. The nine-piece collection for women and men includes blankets, robes, and socks priced from $95 to $400. … Boston-based nail and waxing studio MiniLuxe, developed by Cue Ball Venture Capital Group, opened its first L.A. location last week in Brentwood. … Japanese lifestyle brand Muji will be opening a retail location next month at Westfield Santa Anita in Arcadia. The 6,351-square-foot space, featuring everything from kitchenware to beauty items, will be the company’s fifth store in California. … New York eyewear and leather goods brand Illesteva opened at the Grove last month. The retail location carries the brand’s full collection of sunglasses, optical products and accessories. Shoppers are able to build their own frames. … Santa Monica menswear label Lanai Collection launched its first pop-up shop in November at Santa Monica Place. The two-story shop will be open through Jan. 3. The luxury line was founded by David Ellison, producer and chief executive of Skydance Media and son of Oracle Corp. co-founder Larry Ellison.