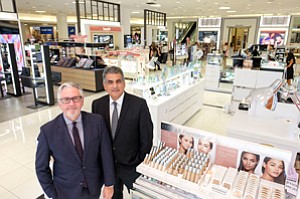 Set back from the bustling traffic of downtown’s Financial District behind a green knoll of AstroTurf, the newly renovated Macy’s is a drastic departure from the dark, gloomy department store that towered over Seventh Street for decades. Fronted by glass doors that open into a brightly lit cosmetics department, punctuated with crisp white surfaces and top 40 hits bumping through its speakers, the new Macy’s includes an array of youth-oriented brands; a revived furniture department; and a visitor’s center aimed at tourist shoppers, the only one at a Macy’s in Southern California.

It has become a laboratory of sorts for an ailing chain that is seeking to refine and redefine its offerings in the face of a retail landscape shifting away from department stores. The company posted net sales of $27.1 billion last year, a roughly 4 percent decrease from the prior year, and announced last month that it planned to close 100 of its 728 stores. Last year, the Irvine Spectrum location was closed, and Macy’s won’t say which stores are slotted for the chopping block this time around.

The 250,000-square-foot downtown space anchors the Bloc, a still-in-development $180 million mixed-use project slated to host a slew of shops and restaurants and ultimately become a shopping mecca.

“We want the mall to be a destination. We want our store to be part of the destination and experience,” said Henry Aguirre, vice president and store manager of the 20-year-old downtown Macy’s.

As the finishing touches were being put on the downtown store, the chain earlier this month released its outline for a recovery plan that focuses resources on high-performing outposts, brings in new vendors, and curates more in-store events.

For its downtown L.A. flagship, the emphasis will be on creating an immersive experience, from the product displays to the music choices, said Michael Ellmann, Macy’s district vice president for Los Angeles.

“You don’t get the same experience sitting at home on your iPad and (shopping),” he said.

Macy’s is facing multiple headwinds, from the expanding presence of online retailers to a notable shift in consumer spending away from apparel and toward categories such as dining and entertainment, said Jason Goldberg, Chicago-based senior vice president of commerce at marketing agency Razorfish and author of the blog Retail Geek.

Amazon.com has become a leading apparel retailer in the United States, said Goldberg, and the brick-and-mortar clothing companies that have managed to flourish are those that are value-oriented, such as Zara and H&M.

Macy’s is also working against its stores being historically located at traditional indoor malls, he said, which in recent years have seen markedly less traffic.

“There’s a lot of (affluence) moving from the suburbs back to the city centers,” said Goldberg.

That’s no less true in Los Angeles, where the population downtown has more than tripled since 1999, with a current median household income of about $100,000, according to reports from the Downtown Center Business Improvement District. It’s this explosive population of young, educated professionals that the local Macy’s is aiming to entice.

The store, which remained open through the renovations, debuted a furniture department in December, the first time such products had been featured in 26 years. It promoted an array of beds, kitchen tables, and chairs designed to fit in the apartments and lofts of downtown, marked by the slogan “small space living.”

And last month, Macy’s debuted a visitor’s center aimed at the location’s other central shopping demographic: tourists. A combination concierge and tourist office, the visitor center provides out-of-town shoppers with luggage storage, ticket sales for amusement parks, and a “shopping package” that includes a variety of coupons and a Macy’s gift card.

The chain is also experimenting companywide with mobile and digital improvements, such as the launch of a pilot program in July named Macy’s on Call. This mobile tool uses artificial intelligence powered by IBM Watson (of “Jeopardy” fame) to answer customers’ questions in store, such as where to find certain products or brands.

Mike Murphy, chief energizing officer of Silver Lake branding strategy firm Brand IQ, said millennials and generation Z have grown up with phones in their hands and it’s smart for businesses to capitalize on this.

“Technology is not going away,” said Murphy. “It’s just going to continue to move n forward.”

While successful execution of all these changes might seem like a heavy lift, and changing the business model of a major institution such as Macy’s can be like trying to “turn a big ship on a dime,” Murphy said it is possible, and pointed to Target Corp. as an example.

The company responds quickly to consumer complaints, he said, deftly adapts to trends, and tries to deliver a shopping experience that’s constantly changing. Target has also collaborated with multiple respected designers, such as Missoni, which helps keep the retailer fresh and customers wondering what they’ll do next.

“I think Target is a great example of a very large retailer that really stays current,” he said. “If you look at Target over the long haul, I think they’re a very empathetic company.”

While Macy’s continues to make companywide changes on the heels of continually declining sales, including tapping President Jeff Gennette to take over as chief executive next year, the renovated downtown department store might ultimately be a product of its environment.

“The success of that store will depend on the success of downtown L.A.,” said Christian Redfearn, a professor at USC’s Price School of Public Policy. “Foot traffic is everything.”

With downtown’s population expanding, Redfearn said he’s fairly optimistic about the success of Macy’s and the Bloc, as it won’t just attract residents and workers on their lunch break – its proximity to the 7th Street Metro Center will draw cross-town commuters as well.

The design of the Bloc helps, said Retail Geek’s Goldberg, as high-performing retail centers are those that are mixed-use, entertainment-oriented, and seamlessly integrate shopping into the surrounding community. The Grove was an early example of this, with storefronts on commercial streets instead of surrounded by a “parking lot moat.”

Every major brand has a finite life, Goldberg said, citing Woolworth, which was eventually overtaken by Sears and Wal-Mart, as just one example. Although Macy’s or other specific chains might eventually disappear, their industry will not.

“Retail is not going away,” he said Goldberg. “Will Macy’s be extinct one day? Yes they will.”