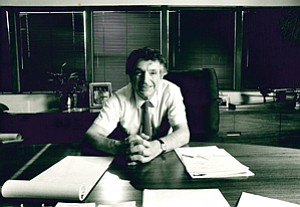 Developer Jona Goldrich came to the United States in the early 1950s with $50 and the moxie to build a real estate development company from scratch. With his death last month at 88, the company he founded, Goldrich Kest, now moves forward without his guidance on a series of renovations to its long-held properties, including 10 in Southern and Northern California.

“We’re very focused on the assets we currently own and making sure they’re the best they can be,” said Mike Drandell, Goldrich Kest’s chief operating officer.

Born in Poland, Goldrich came to the United States via Israel after fleeing the Nazis as a boy. He found his way to Los Angeles, where he became a mechanic before founding a company that cleaned up construction sites. Always eyeing bigger and better things, he built his first apartment, in North Hollywood, in 1957. Sol Kest, a fellow Holocaust survivor, became a partner in the new company in 1959, giving the firm its name Goldrich & Kest (the ampersand was removed recently). The press-shy Kest died in 2010, and with Goldrich’s death the Culver City company has moved into the hands of the next generation. The company today is owned by Goldrich’s two daughters and Kest’s four sons, although none of them participates in day-to-day operations.

Goldrich won a reputation as a pioneer for unlikely developments, building residential buildings in the swamps of Marina del Rey and the office zones of Bunker Hill. In the company’s heyday in the 1970s, it built as many as 30 or 40 properties a year.

“There was just this instinct that he had,” said Drandell, who joined the company in 1995. “A lot of our multifamily portfolio was in cities that you’d think no one would be developing in, and they became big communities.”

Building government-subsidized housing for low-income families and seniors was a key strategy. It might not have been the most lucrative area of the residential sector, but it was solid and dependable.

“I got satisfaction out of providing poor people with housing, but I made money at it,” Goldrich told the Business Journal in a 2001 interview. “They limited how much money you could make, but there was zero risk. I became the biggest in that business.”

Goldrich Kest claims to have been the largest privately held owner of subsidized housing in Southern California during the 1970s and ’80s. Part of the plan was to be able to switch the buildings to conventional use in 20 years, once restrictions imposed by the federal government expired. About two dozen of the firm’s government-subsidized apartments developed in the ’70s have since made that transition.

While the company would like to continue offering affordable units, President Carole Glodney said new government funding programs have made that very difficult. The company also owns nine mixed-use properties, seven commercial buildings, 16 retail sites, and 26 industrial properties. The company holds about $4 billion in assets and generates more than $300 million in revenue a year.

One of Goldrich Kest’s biggest ongoing rehab projects is Grand Promenade on Bunker Hill, a 390-unit apartment tower on Grand Avenue it built in 1988 that is now in the center of a Bunker Hill neighborhood whose cultural prestige has grown.

“Part of our doing this was to be competitive,” said Glodney, who has been with the company since 1972. “The building opened in the late 1980s and concepts are different.”

The renovation is expected to be completed at the end of next year.

Acquisitions, for the most part, are on hold, unless a property is in California and can prove its potential for long-term worth. Goldrich Kest has purchased only a couple of properties in the last year, one in Covina and the other in West Covina.

“We’re not flippers,” said Glodney. “That’s why we really vet a property when we go to purchase.”

The company has a few ground-up developments underway, two apartments, a retail project, and a hotel in Newport Beach.

Both Drandell and Glodney say they treasure lessons learned from Goldrich decades ago.

“He’d always say, ‘Treat it like it’s your money.’ Or, ‘Pretend you’re Jona Goldrich, what do you want to do?’” Drandell recalled. “If you think about it, that’s a pretty big statement for somebody who runs a big, giant company, who’s willing to take some punk kid and say … What would you do in my situation?”