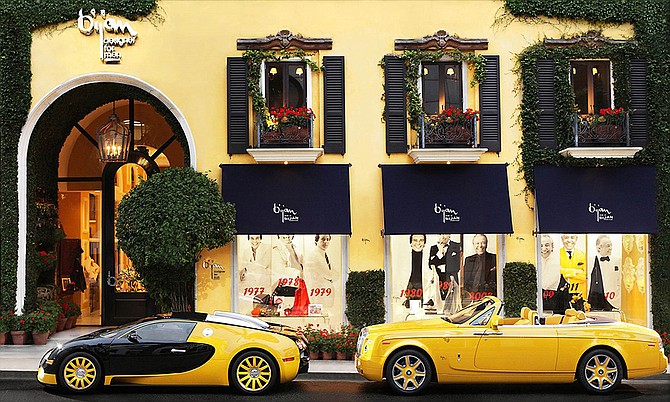 Bijan’s yellow store on Rodeo Drive sold last month for $122 million, or $19,405 a square foot, to the parent company of Louis Vuitton, according to CoStar records.

That makes it a deal considerably ritzier than Chanel’s purchase of its Rodeo store last year for $152 million, or $13,217 a square foot – then a retail record per square foot for California.

“It’s probably one of the most iconic buildings on Rodeo Drive, on one of the best blocks,” Ley said at the time that the sale was first announced in July. “You’re surrounded by other great names like Chanel, Hermes, and Hugo Boss. All buyers of high street are targeting the best streets in America, and this is one of them.”

Bijan has sold exclusively priced menswear out of the 6,287-square-foot Rodeo shop for about 40 years, and is marked by the yellow Rolls Royce and Bugatti often parked outside.

Houman Mahboubi, a broker at Jones Lang LaSalle who specializes in the Beverly Hills market but was not involved with the sale, said such Rodeo properties rarely sell, thus increasing their value.

“The value only goes up,” he said.