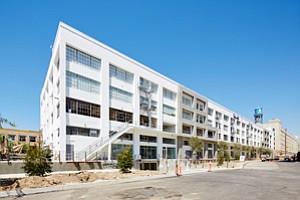 *This story has been updated from its original version.

Downtown’s Arts District has amassed fashionable cafes, eateries, and bars along with apartments and condominiums. Even an outpost of exclusive Soho House is on the way. Now the offices are moving in, with several major projects set to offer roughly 2 million square feet targeting media, entertainment, and tech companies.

“It’s not a marketplace where people are stampeding to go,” said Ian Strano, executive vice president at NAI Capital. “There are a lot of looky-loos.”

That big fish was almost landed.

BuzzFeed was said to have had a deal to take 200,000 square feet at the Ford Factory at Seventh Street and Santa Fe Avenue, but ended up pulling out. There is now buzz in the market that Warner Music Group is interested in leasing the site, which could prove to be the pioneering deal the neighborhood needs inked before more companies decamp to offices set among seafood wholesalers and toy manufacturers.

“We’re a matter of months, as opposed to years, away from the market really picking up energy and signing a bunch of big, notable deals,” said CBRE’s Daniel Rainer, who is leasing office space at the At Mateo retail development. “Once the first market-setting deal happens, I think we’ll see an influx of activity.”

“People are coming from all over Los Angeles and Southern California to come and experience these things,” he said. “Those are the bellwether signs for innovative companies to start looking at options to move their offices.”

The neighborhood earned its moniker in the 1970s when artists settled in cheap lofts and warehouses amid the manufacturers wedged between downtown and the Los Angeles River. The arrival in the Arts District of the Southern California Institute of Architecture, which moved to a renovated quarter-mile-long Santa Fe Railroad depot from Playa Vista in 2001, marked a turning point in development.

“There has been a huge growth spurt in terms of amenities and walkability,” said Tom Wulf, senior vice president at Brentwood-based developer Lowe Enterprises, which plans to build an Arts District office property. “What comes last are offices and tenants.”

Various deep-pocketed developers noticed that same swell of trendsetting retailers in recent years, leading to the spate of office space now coming online. But setting a price point for rental office space in a new market without comps in hand or a major anchor tenant to set a baseline price is a challenge. Plus, developers must make sure rents offset renovation and construction costs while not scaring off potential tenants, especially those seeking to relocate and hunting for a price cut. Several brokers working in the market said asking rents range from about $4 to $4.50 a square foot a month – just above traditional office space downtown.

“For true creative space, the Arts District is viewed from a pricing standpoint as on par with the Westside,” said Andrew Jennison, a partner at Industry Partners, which represents office leasing at Fourth & Traction and Row DTLA. “It’s unproven but it’s also really unique.”

Also untested is whether companies outside of downtown are even capable of uprooting. Typically, firms only make a cross-town move if at least half the workforce can easily commute. Warner Music, for example, with outposts in Burbank and Westwood, might need some soul-searching before making the move. The commute factor could also be a clue as to why BuzzFeed, with offices in Venice, Fairfax District, and Hollywood, declined to head farther east.

Row DTLA is the biggest player in the market, with about 1.4 million square feet of office space on offer inside a 32-acre complex that houses a produce wholesale market next to the American Apparel Inc. factory. (The property technically sits within the Warehouse District on the Arts District’s edge.) Santa Monica co-working firm Real Office Centers recently claimed 27,000 square feet there in a 15-year deal with an option to nab an additional 23,000 square feet on the same floor.

ROC Chief Executive Ron McElroy said he chose the Arts District over other areas downtown for its nontraditional feeling. And the vast layout, on the floor beneath the 80,000-square-foot headquarters for fashion companies Splendid and Ella Moss, offers the flexibility to create spacious work areas and a coffee bar.

“I would just prefer not to be in the middle of a bunch of high-rise buildings and really dense traffic,” said McElroy. “I don’t see it as an unproven market.”

Jim Travers, a founding principal at tenant services firm Cresa who represented ROC in the deal, said such amenities will help the developers attract office tenants and maximize their investment.

“It has definitely some time to roll, but the developers are very sophisticated and this is a new area,” he said. “That’s how you capitalize on your dollars – you invest in places no else wants to be in.”

Fourth & Traction, across the street from Sci-Arc, is being converted from a Coca-Cola Co. factory built in 1915 that was used most recently by manufacturer T.T. Toys. The site, set to be completed early next year, will offer 130,000 square feet including ground-floor retail plus a rooftop deck and an attached parking structure. West L.A.-based Hudson Pacific Properties purchased the site in May of last year for $49 million, several months before purchasing three properties nearby for an estimated $40 million. The sites, at 405 S. Mateo St., are being converted into office and retail properties with 83,000 square feet.”

The Ford Factory is undergoing a similar transformation, set for completion by the end of the year. Most recently used as toy manufacturing site, it originally churned out Ford’s Model A and T cars a century ago. San Francisco developer Shorenstein Properties seized on that history when it bought the site in April 2014 for $37 million.

“It has a phenomenal structure with great character, great history and very desirable traits in terms of the floor plates,” said Zanetos, the leasing broker. He declined to comment on Warner Music’s interest in the property or BuzzFeed’s decision to pull out last year.

A few blocks away on Mateo, Century City developer Blatteis & Schnur Inc. is building a 130,000-square-foot retail complex with 50,000 square feet of office, dubbed At Mateo. Interest has been so strong, said CBRE leasing broker Rainer, that the developer is considering allocating 30,000 more square feet for office instead of retail use.

Lowe picked up a former metal recycling yard next to the Los Angeles River about a year ago, having lost in its bids for the Coca-Cola and Ford buildings. It considered building a residential project similar to its 320-unit Garey Building that just opened nearby, but opted for office instead. Plans call for 90,000 square feet of office space over ground-floor retail to be built over the next three years. By that point, Lowe’s Wulf said he expects the Ford Factory and Fourth & Traction to be filled, letting his project collect the spillover.

But it’s unlikely that many more developers will follow in his footsteps or be able to convert historic properties. Few sites are left that are large enough for a substantial project without demolishing vast swaths of property.

“It’s not like Playa Vista where you have all this land. … It’ll be a very niche market,” said Jennison, the Industry Partners broker. “Once it starts to fill in, the guys who get in first are going to likely get the best deals. After that, the rents are going to really escalate. There’s going to be a barrier to entry.”