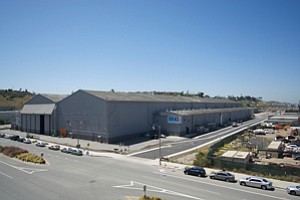 Former airplane hangar in Playa Vista that some architects say Google could adapt into an office space capable of housing 2,000 workers. Photo by Courtesy Photo

Google Inc. is moving forward with plans to spruce up the historic Spruce Goose hangar in Playa Vista by transforming it into a vast office.

Approval to begin preliminary renovations was secured in mid-July by the tech giant, which has another funky office in Los Angeles in the Frank Gehry-designed Binoculars Building on Venice’s Main Street.

Although Google declined to comment on its plans, architects specializing in adaptive reuse said the site offers creative potential as a blank slate that could hold roughly 2,000 workers.

“It’s one of the great spaces in Los Angeles. It’s this huge, just enormous, empty building,” said Wade Killefer, principal at Killefer Flammang Architects in Santa Monica. “It would be an architect’s dream to make it fun.”

The Silicon Valley tech titan signed a lease with building co-owners Ratkovich Co. and Penwood Real Estate Investment Management last year for 358,000 square feet at the site where Howard Hughes built his 200-ton wooden plane, nicknamed the “Spruce Goose,” in the mid-1940s. The city of L.A.’s Building and Safety Department issued a permit three weeks ago allowing Portland, Ore.-based ZGF Architects and Santa Fe Springs-based contractor Matt Construction Corp. to remove a tall wooden spine from the structure and add concrete reinforcements. Another application is under review for “change of use from airplane hangar to office.”

A Google spokesman declined to discuss the renovation plans.

Representatives at ZGF and Matt confirmed their involvement but declined to comment, citing nondisclosure agreements.

The Spruce Goose hangar, with two sections each measuring 750 feet by 100 feet under a roof peaking at 72 feet, is likely the largest single-story building shell in Los Angeles. One option would be for Google to build an interior structural system, similar to heavy-duty scaffolding, which could add as many as six floors while leaving the exterior walls and roof intact, Killefer said.

“There are issues to be dealt with in terms of lighting and cooling, and wherever you need acoustic privacy, but there are many creative options,” she said. “In some ways these spaces are both challenging and extraordinary opportunities for creativity.”

The hangar with two adjoining buildings has hardly been touched since Hughes’ death in 1976. Hughes built it three decades earlier out of layers of glued wood, creating a cathedral-like shape without columns or mezzanines. The Spruce Goose, ordered up during World War II as a cargo carrier named “Hercules,” became the biggest plane in history with a 320-foot wingspan. It now resides at McMinnville, Ore.’s Evergreen Museum. In the 1990s, the massive hangar became a soundstage for films, with a roster including “Titanic” and “Avatar.”

Tishman Speyer bought the surrounding 64-acre parcel in 2007 for $200 million. Unfamiliar with the entertainment business and not interested in operating a soundstage, Tishman put the hangar, which is listed on the National Register of Historic Places, on the market the following year, but got no takers. It defaulted on a loan connected to the property in 2009 and was forced into foreclosure on 56 acres, including the hangar.

In 2010, Ratkovich came in and paid $34.2 million for 28 acres, including the hangar, and spent an additional $50 million in renovations. In honor of the Spruce Goose, Ratkovich dubbed the project the Hercules Campus and hired Levin to upgrade the campus for ad agency 72 and Sunny; Konami Digital Entertainment; and YouTube, owned by Google.

But Ratkovich didn’t have clear plans for the hangar, which was generating just over $1 million a year as a soundstage. That translates to less than 25 cents a square a per month – far below Playa Vista’s average office asking rates of nearly $5 a square foot a month.

“We realized that it was not being used for its highest and best use,” said Milan Ratkovich, a development manager at the company. “As a structure that had a roof that would leak on set, and had some challenges with lighting and power, it needed to be upgraded. Whether it would be long term a studio or an office, we hadn’t quite decided.”

Ratkovich began drawing up design and pricing plans for a possible office conversion. But prospects looked expensive and the financing dubious.

Then Google came calling. It picked up the lease just after buying a dozen acres of commercially zoned land next door from Lincoln Property Co. for a reported $120 million. For Ratkovich, the deal came as a relief.

“Thank God that Google stepped up and showed the interest that it did, because, quite frankly, I don’t know if there’s another entity that could have accomplished this,” he said. “They can think outside of the box and they can devote a whole lot of horsepower to getting this done.”

Matt Construction might offer a head start, as it spent the past half-year remediating the hangar for Ratkovich. ZGF, with an office downtown, has experience designing universities, hospitals, research centers, and offices, including renovations at Microsoft Corp. in Redmond, Wash. But the Spruce Goose renovation is unprecedented for its size and legacy, said Ken Bernstein, manager at the city of L.A.’s Office of Historic Resources.

“In thinking about the forward-looking optimism of Howard Hughes, in many ways it’s very fitting to see Google come in and reimagine what that space could be,” he said.