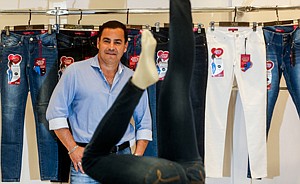 Getting Leg Up: David Vered at Boyle Heights headquarters of YMI Jeanswear. Photo by Ringo Chiu.

Fashion can be fickle, and David Vered, president of Boyle Heights fashion company YMI Jeanswear Inc., said he has a plan in the event the market turns its back on his butt-lifting jeans.

YMI launched its WannaBettaButt? line in 2012, spurred by demand arising from the popularity of ample-bottomed celebrities such as Nicki Minaj and Kim Kardashian, and Vered said sales have increased by 20 percent since the line was introduced. He declined to be more specific.

Yet trends in fashion come and go and Vered, who declined to discuss company financials, said he has a backup plan just in case women lose their interest in butt-enhancing jeans.

The company will launch a line in June called WannaBettaShape?, which will target the waist and stomach. It also sells a wide variety of nondenim apparel, including dresses, tops, shorts, and swimwear.

YMI said the success of the jeans ramped up all parts of business.

The company has grown to 100 employees from 10 in 2000, recently hiring an additional 15 at its Boyle Heights base.

Banking on the long-term success of a narrow brand is a fraught proposition – bell bottoms, anyone? – and yet there is a good chance the body-shaping clothing conceit might stick around, said Houman Salem, chief executive of San Fernando design and development firm Argyle Haus of Apparel Inc.

The uplifting denim that enhances women’s appearance has a similar concept as a lipstick or push-up bra and so women are not going to let it go any time soon, he said.

Vered moved to the United States from Israel 30 years ago, looking for opportunities in the fashion industry. He found one when he got a job in downtown L.A.’s Fashion District buying and selling discount apparel for different vendors.

He worked his way up in the business before launching YMI in 2000 with partners Moshe Zaga and Michael Godigian. For the next decade or so, the company focused mainly on the junior market, making jeans for teenagers.

The idea to create enhancing jeans for women came up during a 2012 brainstorming session, leading him to conclude that every woman who shops for a pair of jeans is looking for nothing less than denim that makes her behind look rounder, bigger, and better.

YMI launched the line WannaBettaButt? that same year. Vered said the line, with sizes ranging from 0 to 24, became instantly popular. The jeans turned out to be equally appealing to working moms as college students.

“Everybody seemed to want it,” he said.

The intricate technique for making the shape-shifting jeans is known as “countering.” Instead of padding, the jeans use curvy pockets and seams. The fabric shapes the v-shaped section on the back of the jeans, called the “yoke,” into a curve. Layers of pockets, stitching, and seams provide a firmer fit and create an illusion of roundness.

A team of designers in Los Angeles develops the styles, which are then sent to China or Vietnam for manufacturing. YMI says its model allows the company to keep its $40 price point for the jeans. The average price for similar jeans by other brands is $70.

Vered wouldn’t disclose production costs for the WannaBettaButt? line, but said that the enhanced stitching, pockets, and seams adds about 10 percent to the cost, compared with regular jeans.

“It’s a tough marketplace,” Gokki said. “They need to be innovative.”