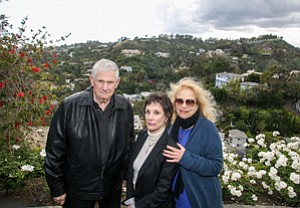 Plans for a house bigger than Hearst Castle that was to rise on a weed-covered slope in Benedict Canyon have gone by the wayside, withdrawn in the wake of community and government pressure.

At more than 80,000 square feet of floor space, the project’s proposed size raised alarms that it would have dwarfed nearby homes, endangered wildlife, and clogged streets with trucks during a lengthy construction process. Perhaps worse, there was the fear it would become a party pad attracting hundreds of people to the tony neighborhood.

“It’s one man’s vision that would ruin a community,” said Nickie Miner, a five-decade resident of the area, which sits between Bel Air and Beverly Hills.

The debate came as various L.A. neighborhoods grapple with how to slow down megadevelopments in residential areas long occupied by smaller – though not necessarily small – homes.

The house planned for the site was to be the home of Michael Scott, a partner at Anaheim mobile-home park owner and developer Kort & Scott Financial Group.

The city’s Building and Safety Department had been scheduled to review a land excavation permit application on April 5, but on March 31, Scott’s consultant, Chris Parker of Calabasas-based Pacific Crest Consultants, said in a letter that Scott was withdrawing the application as well as the project’s environmental review.

Paul Koretz, the city councilman representing the area, had asked about a week before that the department deny the application – and for the project as proposed to be withdrawn.

Parker did not respond to requests for clarification, and it was not clear whether a new application would be submitted.

But a city planning official said late last week that with the withdrawal, all requested entitlements were terminated and that any resubmission would have to be at a much smaller scale to conform with a new “anti-mansionization” ordinance.

Even at a smaller scale, it could be several years before Scott’s home, on a site with views sweeping from Dodger Stadium to the Westside, is completed.

That may allay – for a time – neighbors’ fears that he will bring legions of friends to enjoy the massive property.

Ben Bacal, an agent with Rodeo Realty Fine Estates in Beverly Hills who handled the $19.5 million sale of the property to Scott, said Scott typically hosts parties once a month at his current North Beverly Park home.

“His parties are not obnoxious,” Bacal said. “They’re not even parties – they’re more like gatherings.”

The agent also said he had reviewed plans for the home, and that it appeared well-designed to fit the landscape.

“It cascades down the hill, it’s not just one box that sits on the hill,” he said. “It’s going to be very stealth.”

Bacal said he was not aware of the plan’s withdrawal.

Scott did not respond to a request for comment, nor did his land-use attorneys.

The tussle over the Scott project is the latest in an ongoing series of debates about the growing number of large homes that have been built in the region, many of which have pushed limits with regard to footprint and square footage.

In response to complaints from communities across the city, the Los Angeles City Council last year approved stop-gap measures for 20 areas meant to prevent the construction of super-size homes. The moratorium is in place for two years, during which time a permanent anti-mansionization ordinance is to be drafted and implemented. The city’s Planning Commission is scheduled to revisit it next month.

The current poster child for the extravagance targeted by the anti-mansionization crowd has seen its developer slammed with criminal charges. Construction of a 30,000-square-foot Bel Air home – which locals have dubbed “Starship Enterprise” – by luxury developer Mohamed Hadid was underway in December when city inspectors discovered numerous code violations for unapproved amenities such as an underground Imax theater and guest rooms built below a swimming pool. City officials said construction has not resumed and Hadid is scheduled for trial in June.

While that project has sparked plenty of ire – including the wrath of a Wal-Mart Stores Inc. heir who owns a home nearby – it has not been the biggest to make waves.

Last May, developer Nile Niami said he was embarking on a 20-month construction project to build a Bel Air home he hoped to sell for $500 million. His plans call for a 74,000-square-foot main building and three smaller homes – amounting to a square footage total of more than 100,000 square feet.

Other than prompting worry of overblown home valuations, that project has not sparked community outrage.

Scott’s current abode is a 17,000-square-foot mansion in North Beverly Park, where he has hosted several parties that became fodder for Hollywood gossip websites.

It is that history – and the tales of party pads in other high-end neighborhoods – that had his potential new neighbors, Miner, Bob Schlesinger, and Judy Winik, worried.

One party on Weidlake Drive in the Hollywood Hills reportedly featured a lion; just last month, the property owner Danny Fitzgerald sued Prince Aziz Al Saud for $80,000 in alleged damages incurred when the prince rented the home for a party.

Among the amenities proposed as part of Scott’s original plan, Koretz said, were movie theaters, tennis courts, bowling alleys, and steam and sauna rooms. There would also have been sand volleyball courts, guest suites, and an aviary. Plans showed more than 20,000 square feet allotted to parking, enough to accommodate about 50 cars.

In his letter, Scott also said the home would be a “62,907 square foot single family residence above basement.”

Architectural plans submitted in October to the Planning Department showed a six-story building with a larger footprint.

The basement had been a sore spot for locals tracking the project. According to the plans filed in October, it consisted of three floors totaling about 38,700 square feet.

Under a city ordinance that regulates hillside construction, the maximum residential floor area need not consider the basement size. New limits were enacted in March of last year but Scott submitted initial plans in 2014. Any new submission would be subject to the more recent limitations.

Scott appeared to be taking advantage of that older ordinance, said Aaron Green, a spokesman for TV producer Jeff Franklin, creator of TV show “Full House,” whose home sits just below Scott’s property. That’s what got Franklin and his neighbors especially peeved.

“He was hoping to sneak by this monstrosity of a project and hope that nobody noticed,” said Green. “Nobody’s saying don’t build an enormous home – they’re just saying follow the rules.”

Land-use attorney Ed Casey, a partner in the downtown L.A. office of Alston & Bird who is not involved in the Scott project, said city planners can interpret the definition of “basement” based on factors including the hillside’s grade and elevation.

“Those hillside houses seem to be getting bigger all the time, frankly, and I don’t know if L.A. has really decided what it wants,” he said.