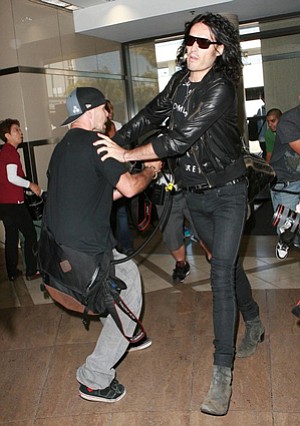 Air carriers want celebrities to fly in and out of Los Angeles International Airport. But paparazzi-porous LAX scares off many big names.

That’s why the Board of Airport Commissioners, which oversees Los Angeles International Airport, last week unanimously approved a 10-year lease to develop a remote airline lounge where VIP passengers can be transferred in private to commercial planes, saying that the facility would alleviate the commotion caused by celebs and their star-struck fans at the nation’s second-busiest airport.

Imagine celebs no longer quick-walking the concourse with a cameraman trotting alongside, or movie stars no longer waiting at the luggage carousel with a gaggle of autograph seekers hanging around.

“When celebrities do transit thru the airport it can create quite a disturbance. They attract a number of followers that sometimes add to congestion and kind of a bit of mayhem,” said Deborah Flint, executive director of Los Angeles World Airports, at a recent meeting of the commissioners. “Having this activity removed in a more controlled environment is a benefit to us from a security perspective.”

Under the proposal, Gavin de Becker and Associates, a private security firm in Studio City, will invest $3 million to renovate a property next to the airport’s southernmost runway, transforming the vacant building at 6851 West Imperial Highway into an exclusive airport entryway for any guest willing to pay an $1,800 fee. The security firm will operate the lounge and pay the airport.

The lounge, which will be the first of its kind at a U.S. airport, is expected to generate $3.75 million for the airport in its first year and $34 million over that 10-year period.

But as the plan takes shape, Gavin de Becker, who approached LAWA to build the lounge, is not the only one who believes his tight-lipped entrepreneurial plan would present a promising opportunity.

Widespread backing for the proposed private lounge comes as the airport undergoes an $8.5 billion renovation – the largest public works project in the city’s history. In addition to terminal renovations and airfield improvements, the overhaul includes the completed expansion of a $2.1 billion Tom Bradley International Terminal, and a separate $5 billion ground transportation project expected to be finished in 2023.

Despite those renovations, de Becker still saw a problem.

“There is no back door,’’ he recently told the Wall Street Journal, suggesting that the celebrities, athletes, diplomats and others needed an alternative.

According to the paper, de Becker has counted footsteps from drop-off points to airplanes at LAX, tallying as many as 2,200— with no way to avoid the public and Transportation Security Administration and Customs checkpoints.

At Delta Air Lines Inc.’s newly built Delta One Lounge, for example, celebrities clad in fedoras and dark shades can be dropped off beside a VIP entrance and ushered into exclusive lounges, handily evading swarms of photographers and camera-clicking tourists in airport terminals.

But the LAX lounge will be 60 steps from drop-off to airplane seat, all out of view of cameras, de Becker told the publication, allowing travelers to avoid public security checkpoints along with prying paparazzi lenses and adoring fans.

For that reason, some think his business plan is spot on.

“I think it’s brilliant,” said Rita Tateel, president of celebrity booking agency Celebrity Source. “These VIP lounges are very important. Between the paparazzi and the public, it becomes very difficult for someone who is recognizable to travel commercially.”

She’s not the only one. Airlines generally seem in support. After all, the more privacy that celebrities, political figures and top business people can get at LAX, the more likely they are to fly on commercial airlines rather than private jets.

American Airlines Inc. of Fort Worth, Texas, has already signaled that it would consider making arrangements with de Becker to transport passengers directly from the new terminal to their flights, despite operating its own private lounge at LAX.

Celebrities who receive endorsements or agree to work on a shoot would probably ask representatives to build a lounge fee into their contracts, Tateel said. TV and film studios, often reluctant to pay five figures to hire a private jet, would likely be supportive of an exclusive lounge as well.

Even potential competitors see an opportunity.

“I think it caters right to our audience,” said Justin Hart, vice president of membership at Surf Air, a Santa Monica-based airline that offers unlimited private flights from Hawthorne Municipal Airport and Burbank’s Bob Hope Airport to other locations in California for a monthly fee.

As passengers use commercial airlines to fly between Surf Air hubs, Hart said, he could envision a partnership between LAX and the airline.

“I see no competition. I see a great benefit,” he said.

Not all agree. Marshall McClain, president of the Los Angeles Airport Peace Officers Association, is critical of the concept.

“Is the VIP terminal more important, or functioning police cars so you can get to an emergency?” McClain asked last week during a 10-day stretch when LAX was expected to see a record number of holiday travelers.

“LAX is still considered one of the No. 1 terrorist targets on the West Coast. So when you’re not putting public safety and security on the top of your list, that’s a concern.”

Most importantly, McClain said, the airport police force still doesn’t have its own 911 dispatch system. Currently, emergency calls at the airport are routed out through the Los Angeles Police Department.

Asked if the new lounge prioritized celebrity over security though, even the TSA, which would need to approve any plan submitted by the firm, seemed to fall into de Becker’s camp.

“There are some very high-profile cases of celebrities impacting operations in the main terminal and I think we’ve all seen the paparazzi that many of these celebrities attract. So if we can eliminate this distraction for employees and other passengers, it’s a win-win,” said Nico Melendez, a TSA spokesman.

Melendez added that the TSA would work with the city and airport to make the plan work.