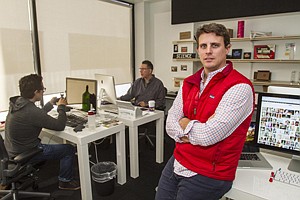 Dollar Shave Club has a fast-growing business and there are rumblings of takeover interest. However, making an exit might be tricky.

The online razor subscription service has grown rapidly since its founding in 2012, thanks in large part to a funny commercial featuring founder and Chief Executive Michael Dubin that went viral on the Internet.

The Santa Monica startup reported revenue of $64 million last year, up from $19 million in 2013, and in June estimated its sales would be $140 million this year.

Against such increased competition, Dollar Shave Club will likely be considering its options carefully.

Its fast growth has attracted more than $164 million in venture capital of its own, including a $75 million Series D round in June, which was topped off with a $15.7 million insider round two weeks ago, according to a filing with the Securities and Exchange Commission and a source with knowledge of the situation who was not authorized to comment publicly on the matter.

Dollar Shave Club’s Series D, and J.P. Morgan Securities’ involvement as a stock broker, is possibly a precursor to making an initial public offering, positioning itself for a sale or merger next year, the source said.

“They’re not filing for an IPO this year, but there’s a lot of M&A interest and there is a lot of IPO interest,” said the source, who added the company is on track to post its largest fourth-quarter revenue.

The company’s subscription plans range from $1 to $9 a month. It claims to have more than 2.4 million subscribers as of this month. Subscribers get razors delivered regularly to their door through the mail.

An IPO would give Dollar Shave Club more cash to fend off rivals, but going public could be a tough sell to the volatile markets.

“Gillette has better technology and Dollar Shave Club doesn’t have anything novel, except lower prices,” notes Ali Dibadj, an analyst at AllianceBernstein of New York.

However, recent successful tech offerings, such as Square Inc.’s $279 million and Match Group Inc.’s $460 million respective IPOs, both earlier this month, present a more optimistic case for heading to the public markets.

Since its launch, Dollar Shave Club has expanded its offerings to include bathroom products such as shaving cream, hair products and toilet wipes, but its core business is still reliant on selling low-cost razors, an operation that could be easily duplicated by larger rivals.

Instead of an IPO, Dollar Shave Club could shop itself around to a large consumer goods retailer, such as Procter & Gamble. However, the consumer goods conglomerate’s focus on selling higher-margin razors makes it an unlikely buyer, analysts said.

“If they were to acquire (Dollar Shave Club), it would be more so to keep it out of the hands of someone else rather than grow that business,” said Joe Altobello, a senior equity analyst with Raymond James Financial Inc. of St. Petersburg, Fla.

Gillette reportedly had a 60 percent gross margin before it was acquired by Procter & Gamble in 2004. However, net sales for Procter & Gamble’s grooming division, which includes Gillette razors, electric razors related shaving products, fell 14 percent to $1.7 billion on a 3 percent decrease in unit volume for the quarter ended Sept. 30, according to a recent SEC filing. Its declining revenue, said analysts, can be partly attributed to low-cost competition from companies such as Dollar Shave Club and Harry’s.

Dollar Shave Club might be best served to go with one of Procter & Gamble’s rivals should they come calling, said Altobello. However, those companies would likely have to pay a premium in order to satisfy Dollar Shave Club’s investors.

Its $90.7 million Series D round is one of the larger tech company financings this year in Los Angeles. When the round was initially announced in June, the company was reportedly valued at $615 million.

“Edgewell Personal Care would make sense because they’ve got the Schick brand,” said Altobello. “(Or) it could be someone without a presence in blades and razors like Unilever.”