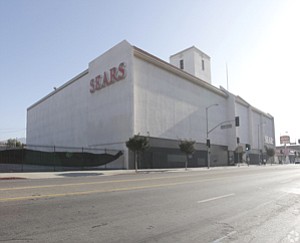 Mid-Wilshire developer CIM Group plans to transform the long-deserted Sears Hollywood site into a mixed-use complex with as many as 700 apartments and more than 300,000 square feet of retail.

Sources said the developer paid $43.5 million, or $8.2 million an acre, earlier this month to acquire the 5.3 acres at 5601-5667 Santa Monica Blvd. between North Wilton Place and North Saint Andrews Place.

The East Hollywood site includes the roughly 100,000-square-foot Sears building, which has been vacant since 2008. It also includes an empty lot and several boarded-up retail properties, one of which used to house a liquor store.

Lately, it hasn’t been uncommon to see a homeless tent or two outside the abandoned properties, though that may soon change when CIM pushes through with its project, which sources say is expected to come out of the ground in a year. The former Sears building will remain on the site and will be renovated, sources said.

The seller, Culver City developer Continental Development Group, acquired the property with plans to break ground in 2009 on a $275 million development with 475 residential units and 380,000 square feet of retail, dubbed Paseo Plaza. Things didn’t go so smoothly. First, it faced community opposition in the form a lawsuit brought on behalf of the La Mirada Neighborhood Association. It was ultimately approved by the city of Los Angeles in 2007, but funding for the project was not available in the downturn.

Continental never picked it back up again when the recovery began.

Continental Chief Executive Juri Ripinsky and a spokeswoman for CIM Group both declined to comment.

If it proceeds as planned, the new CIM development will be a major change for the derelict stretch of Santa Monica, which is not far from the sparkly developments on the same street in West Hollywood.