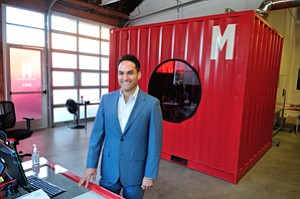 While hotel management and ketchup manufacturing are easy-to-grasp mainstream businesses, managing marijuana companies is not.

That’s why Culver City’s MedMen prefers to compare itself to Marriott or Heinz when explaining what it does: providing operational management for state-compliant, fully licensed businesses that grow, process or sell marijuana.

The firm offers clients back-office support, basically replacing the need for a C-suite, and also hires and manages employees.

“The space is being institutionalized and it won’t matter that its cannabis,” said MedMen Chief Executive Adam Bierman. “It’s big manufacturing and it’s big agriculture at the core.”

Though the firm has focused primarily on marijuana industry consulting since 2013, Bierman has been steering MedMen into operations management over the past year – his goal from the start. The idea is to leverage economies of scale while becoming a market leader in an increasingly institutionalized and cash-rich sector.

This tack has helped MedMen secure 10 operating contracts in Nevada, Maryland and California as well as nearly $8 million in funding over the past year from family offices, a real estate fund and other institutional investors, said Bierman, who added that MedMen will be announcing an additional eight-figure infusion before year’s end.

The firm also struck a deal last month to lend its production expertise to a new line of extracts being launched by Canadian medical cannabis producer MedReleaf Corp., one of about two dozen licensed marijuana producers in that country. In exchange, the Toronto firm, which serves thousands of patients from its 55,000-square-foot headquarters, made an undisclosed equity investment in MedMen. As part of the agreement, Bierman’s firm will also help MedReleaf launch in the United States by licensing some of its products to another MedMen producer in Nevada.

“What drew us to them is their experience and level of professionalism, said MedReleaf Chief Executive Neil Closner, noting MedMen’s management team comes from a variety of industries. “They’re not just a group of guys who’ve just been growing legally or otherwise in their basements who fashion themselves as experts.”

The bar is being raised for both small and large cannabis companies alike, in part because of the talent getting involved from other sectors, said Troy Dayton, chief executive of Oakland cannabis investment and research firm ArcView Group. He added that companies, such as the ones that MedMen serves, need experienced leaders to stand out and lure capital.

“Funding … gives them the ability to establish market dominance or market position when people are beginning to decide what brands they will support over the long haul,” he said.

Dayton said larger investors, not just angels, are increasingly looking to back pot businesses with significant traction as well as potential to scale and generate big returns.

These backers are chasing what has become a $4.7 billion U.S. market for legal cannabis, which is expected to balloon to $17.5 billion by 2020, according to data analytics firm New Frontier Financials.

But Dayton cautioned that while large companies might have money and talent, they must also cultivate the authenticity prevalent in smaller businesses.

“If they don’t also have a strong story and strong values and connection to the plant and politics, then they run the risk of looking too corporate,” he warned.

After being asked to consult on a small medical marijuana dispensary, which Bierman said he found in disarray but still bringing in significant revenue, the duo thought they could do better.

They launched MedMen in 2010, opening and operating dispensaries across Los Angeles. After several years, Bierman said he saw a bigger opportunity in lending management expertise to licensed growers, manufacturers and retailers.

MedMen got rid of its local businesses in 2013 when the L.A. medical marijuana market was looking murky without a statewide regulatory framework. As a bridge into large-scale operational management, the firm began helping businesses across the country with license applications.

Today, MedMen resides in a Culver City warehouse that looks more like an ad agency than cannabis company due to its numerous stylistic flourishes such as a shipping container-turned office.

While the consultancy was earning about $2 million a year in revenue, that’s been greatly reduced as MedMen brings new management projects on line. Bierman said the firm is still six to nine months away from recognizing that revenue.

For example, one client is building a $12 million, 45,000-square-foot cultivation and production facility on four acres outside of Reno, Nev.

MedMen’s compensation varies by contract, but is tied to performance. It might take a percentage of a client’s earnings in states where that’s allowed.

Though it might seem MedMen’s business model could put the business in a position where it’s servicing firms that compete with one another, Bierman said that shouldn’t be an issue, pointing out that Four Seasons Hotels Inc. doesn’t see a conflict in managing two hotels in Beverly Hills.

“We’re definitely not going to take on deals where we’re going to cannibalize ourselves, but that doesn’t mean I can’t operate multiple businesses within the same jurisdiction and be successful all the way around,” he said.