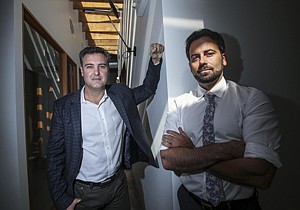 In Fashion: Attorneys Stephen Doniger, left, and Scott Burroughs at their eponymous firm in Venice. Photo by Ringo Chiu.

Stephen Doniger and Scott Burroughs were nowhere to be found at last month’s runway show during L.A. Fashion Week. Even so, the $18 billion fashion industry in Los Angeles is quite familiar with the pair’s work.

Neither of the business partners has designed or manufactured a single article of clothing. Instead, Doniger and Burroughs have created a lucrative legal practice in Venice that helps companies and individuals in the fashion industry collect money from competitors who have allegedly stolen their copyrighted designs.

“We are the fashion copyright law firm,” said Doniger. “That’s what most people know us as.”

Indeed, their eponymous firm, Doniger/Burroughs, has filed more than 800 copyright lawsuits since 2010, more than double any other firm in the country, according to Menlo Park legal analytics firm Lex Machina.

“These guys are clearly very litigious and a large part of their business relies on fabric designs,” said Brian Howard, director of analytic services at Lex Machina. “Plaintiffs’ attorneys tend to have a high degree of specialization, but these guys seem to have an even higher degree. It’s just overwhelmingly all fabrics.”

But Doniger/Burroughs doesn’t just file a lot of cases, it wins them.

In the last 12 months alone, Doniger said his firm has taken three cases to trial, winning each one. That’s pretty unusual, he noted, because his clients tend to settle the vast majority of their disputes outside of court long before a jury is even selected.

The awards, he continued, typically start around $30,000 but have been as high as $1.75 million. Doniger/Burroughs gets a cut of winnings, but its share varies depending on the arrangement with its client.

As one might imagine given the firm’s success representing a slew of local fashion companies, Doniger/Burroughs has also made some enemies in the industry.

Mark Brutzkus, a partner at Woodland Hills law firm Ezra Brutzkus Guber, said his firm has gone up against Doniger/Burroughs in about 200 cases.

More often than not, the claims made against Brutzkus’ clients center on a print design used on garments they’ve either sold or manufactured.

“The fashion industry is a trend-driven business,” Brutzkus said. “If the current trend is a single floral design on a T-shirt, there are only so many variations of a single floral design. How do you figure out – based on where the petals are and the leaves are – if you’re infringing on someone else’s design?”

The claims aren’t easy to fight and oftentimes, he said, they create a massive financial burden on textile and fashion businesses.

What’s more, Brutzkus said fashion designers have no way to check whether a particular design has been registered with the U.S. Copyright Office. That can be extremely problematic, he said, because no one really knows if they’re inadvertently using a copyrighted design, adding that the only way to view a design is when it’s the subject of pending litigation.

“These cases have changed the complexion of the fashion industry on the West Coast,” Brutzkus said. “I’ve had clients be put out of business because of these claims and it will continue. It’s lucrative (for Doniger/Burroughs) and as long as they’re making money and their clients are making money, they’re going to keep filing these claims.”

When Doniger and Burroughs began working together in 2005, they only had two clients in the fashion industry. Most of their work at the time was generated from businesses in other industries that needed legal representation in more general intellectual property-related disputes.

But that quickly changed after the firm garnered its first victory representing a local textile firm in a copyright dispute a decade ago.

“The fashion industry is really tight-knit and so word got around and a lot of other clients started coming to us,” Doniger said. “We really grew organically.”

He wouldn’t disclose how much revenue his firm has generated in recent years, but noted that it has increased annually. Business has grown enough that the firm was able to start hiring more attorneys about three years ago. Today, it has nine in the Venice office, including the co-founders, who handle about 200 cases at any given time.

“We tend not to worry about the money,” Burroughs said. “Underneath it all, we just have this view that we’re protecting content creators.”

Indeed, a core element of the firm’s mission is to raise awareness in the fashion industry about the importance of protecting copyrighted designs and allowing designers to make money on their creations.

“The Copyright Act stands for this view that we’re richer as a society when more people are creating artwork and literature and music,” Doniger said, “so we’re going to take a stand for those content creators.”

Still, it’s not uncommon for opponents to attack the firm’s practice and label its clients as “copyright trolls,” who are just looking to make a quick buck.

“When I hear assertions that we represent copyright trolls, it’s an insult to the content creators,” Doniger said. “What we heard for years was that these are frivolous lawsuits. But you can’t keep saying that when we’ve tried and won a dozen straight cases.”

Even though the vast majority of Doniger/Burroughs’ cases cater to the fashion industry, the firm has recently seen an uptick in demand for its services from other artists, photographers, writers and the like.

One area in particular that Burroughs anticipates will keep his firm busy stems from the rise of what he calls “clickbait” cases, which typically involve online slideshows of photos that the author likely isn’t authorized to republish.

“I’m sure you’ve seen the links for things like ‘37 Pictures of Llamas That Look Like Celebrities,’” he said. “Those sites don’t have the rights to use those photos.”

Last month, for example, Burroughs filed a case on behalf of Peter Menzel, a photojournalist in Napa who claims his photos were used in an online article published by “a clickbait website.”

The case, filed in federal court in Los Angeles, seeks to collect $150,000 from the website. It’s the third clickbait case the firm has filed, Burroughs said, but it likely won’t be the last.

The growing popularity of similar websites, Burroughs said, will likely drum up even more business for the firm, especially if its pending cases have anywhere near the success its fashion cases have had.

“We never saw ourselves only representing clients in the fashion industry,” Burroughs said, adding that regardless of the industry, “it’s important to go to court and take a stand because without compensation, content creators are going to stop creating.”