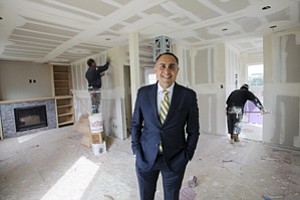 How much space would you give up so you could live right in the city where you work and play?

Apparently enough that microunits – or apartments often smaller than 400 square feet – are popping up throughout the L.A. area.

Developers welcome their higher per-foot prices and lenders view them as a safe asset worth financing – which is what really drives real estate development. And it’s all happening despite regulations that can limit projects in neighborhoods that seem to need them most.

The tiny units provide just enough space to do life’s most basic tasks – and even that can be a stretch. But they are growing in popularity because they give people a way to afford the sky-high housing costs and rising rents in already pricey cities such as Santa Monica and now, even up-and-coming neighborhoods.

Rents for microunits are 20 percent to 30 percent less than what standard one-bedroom units would cost in those markets, according to a 2013 nationwide report on microunits by the Urban Land Institute in Washington, D.C. That allows more people to live alone – and not deal with flaky roommates – which has piqued the interest of plenty of renters.

Developers and lenders are on board because microunits deliver more rent per square foot than standard units – although they cost more to build. Paul Rahimian, chief executive of bridge lending firm Parkview Financial in West Los Angeles, added that their track record of leasing up quickly means developers are easily able to refinance his short-term loan or sell the building, which means he gets his money back on time.

“It doesn’t bother us that it is a lower rent per unit,” Rahimian said. “If anything, since the developer is getting a higher rent per square foot, the entire project is worth more and that gives us more comfort to do the loan.”

That’s why Rahimian lent $1.1 million in January to developers renovating an old bungalow-style apartment building in Highland Park – a short walk to a pedestrian-friendly downtown Los Angeles and mass transit. That project’s developers expect to charge monthly rents of about $1,800 on average. If tenants looked for comparable standard apartments in the area, they would have to pay $2,500 to $3,000 a month in rent, he said.

“They want an area close to the (Los Angeles County Metropolitan Transportation Authority), close to restaurants and coffee shops and Trader Joe’s, but at the same time, they don’t want to pay enormous rents so they are willing to live in 400 square feet,” Rahimian said. “It’s what gets people excited.”

Tenants in microunits have space to do little more than eat, sleep and watch television, but several longtime microunit designers and builders say that’s not an issue – as long as the surrounding area offers plenty of entertainment options.

Jim Andersen, senior vice president for Trammell Crow Co.’s multifamily development subsidiary High Street Residential in El Segundo, built more than six microunit developments in Santa Monica while he was with that city’s real estate developer and property manager NMS Properties Inc., where he worked until last year. He said a vibrant neighborhood is the key to a successful microunit project.

“It’s really critical there’s a walkable downtown involved because if you’re in a microunit, you don’t want to be in the microunit that much,” Andersen said. “It’s more of a lock-and-go place – a launching pad.”

Some microunit developers are making up for the lack of entertaining and living space by investing in lavish common areas, which are often rooftop decks. Eleve Lofts & Skydeck in Glendale, where studios are 375 square feet, has a 26,000-square-foot roof with a kitchen, barbecue grills, media center, piano, party area with fire pits, hot and cold tubs, cabanas with their own power outlets and wireless Internet – and even a fenced dog park.

Adding extra amenities such as a fully loaded rooftop lounge adds to the cost of construction, but microunit projects are more expensive to build to begin with – about 5 percent to 10 percent more costly per square foot than conventional apartments, according to the ULI study.

That’s because developers put in premium finishes, such as wood floors and granite countertops, Andersen said, and the ratio of space in microunits covered by the finishes is higher than in standard units. Plus, the units also need 9-foot-plus ceilings and lots of glass to appear larger and more open.

But those higher costs are offset by higher rents, he added, making it a good deal for developers.

“Rents are going to be lower on a per-unit basis, but rents on a per-square-foot basis will be higher because you’re providing less square footage,” he said.

Given soaring rents throughout Los Angeles, urban planners say the region ought to welcome more microunits. That could make certain parts of town affordable to people who simply can’t pay rents that conventional apartments are commanding.

For example, a 375-square-foot unit at the Gibson Santa Monica on Seventh Street rents for $2,200, but standard-size units there go for nearly $4,000.

However, many Southern California cities have policies that hinder the development of microunit complexes. That’s likely because high-density housing is just too unfamiliar for the area, said UCLA urban planning expert and economist Paul Ong.

“L.A.’s history as a sprawling metropolis has not prepared us to undertake good planning for higher density,” Ong said. “While many Angelenos fear becoming Manhattanized, I think we need a balance that allows some parts of Los Angeles to have more high-density urban neighborhoods like what we see in New York City.”

But that’s not going to happen while restrictive regulations that cities use to limit high-density housing remain in place, developers say.

Santa Monica’s nosebleed rents and vibrant downtown has made the city a prime target for microunits. The city has numerous microunit developments but now limits them to only 15 percent to 20 percent of the overall number of units within new complexes, David Martin, Santa Monica’s director of planning and community development, said at a recent ULI panel session on microunits in Los Angeles.

Developers and architects have begun eyeing other areas where they see a similar mix of robust demand and tight supply, such as downtown Los Angeles and West Hollywood. West Hollywood has several walkable neighborhoods and the city is encouraging pedestrian and bicycle use through measures such as the installation of wider sidewalks and outdoor seating areas.

But West Hollywood caps high-density housing by limiting the number of market-rate units that can be built based on square footage and parking requirements, according to city planners. The city’s public information officer, Joshua Schare, could not comment on whether the city might consider changing those policies in the near future to attract microunits, he said, as the council hasn’t taken a position on them.

While he waits for cities to loosen the rules – or not – Rahimian, the construction lender, has no plans to stop funding new microunit projects. He said his company has been loaning to similar projects in the San Francisco Bay Area for years now, and more recently in Koreatown and Santa Monica, and believes mass acceptance of the residences is reaching a critical point. He believes that means microunits will be big business going forward, once more civic officials realize their economic potential – and the relatively affordable housing they provide.

“Cities aren’t completely closed to it, just slow to warm up,” he said.